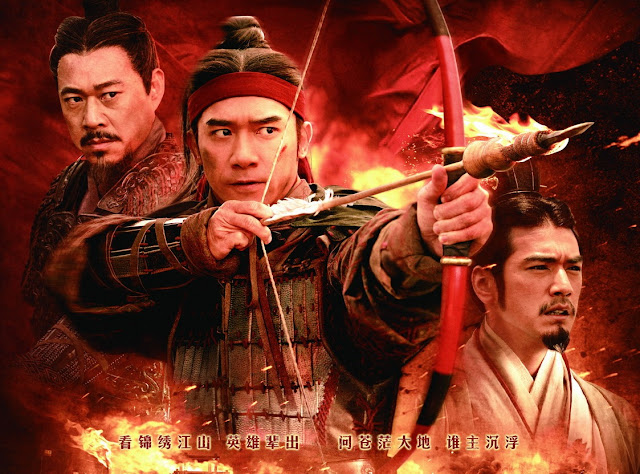 First up for reviews is Red Cliff, a 2008 film (in two parts) directed by John Woo.

With more people in the west being keen on Dynasty Warriors than ever before, and in the leadup to the release of Dynasty Warriors 9, which promises to be absolutely huge, I feel the need right now to encourage everyone to, firstly, read Romance of the Three Kingdoms, and secondly, watch Red Cliff. Having a better sense of the narrative underpinning Dynasty Warriors, and experiencing the story across multiple different media, does help with enjoying the games themselves, as you come away from both the original novel and the film with a far better sense of character and situation. That, in turn, makes the battles in the Dynasty Warriors games all the more vivid. 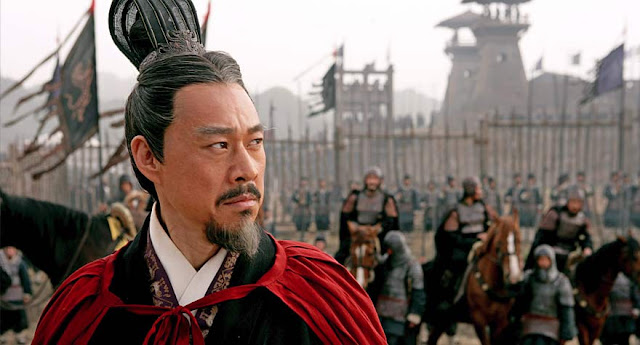 Red Cliff focuses on one particular battle within the broader era of the Three Kingdoms; the battle of Chibi (“Red Cliffs”) which was notable for the sheer scope of the fighting (often called the “biggest naval battle in history), and for its importance in shaping the politics of the era.

Recognising the scope of the threat before them, Lu Bei and San Quan allied, and through superior tactics (Zhuge Liang, Lu Bei’s advisor, was recognised as near-mystical in his abilities as a strategist), were able to win the battle, and complete the establishment of three, relatively stable, kingdoms. Splitting China up like that meant that all three forces would then keep one another in check for many years later, before the sons and grandsons of the three kingdoms failed to maintain their holds, and another power, Sima Yan, was able to claim a unified China (the start of the Jin dynasty, and the end of the Three Kingdoms era). 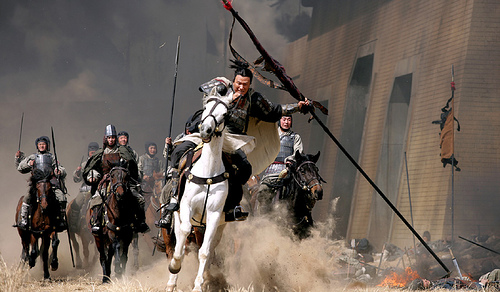 So, as a pivotal moment in a turbulent time, Chibi offered cinematic gold for a filmmaker like John Woo; an epic narrative, allowing for a lengthy film – so large it needed to be broken into two parts – with scale and scope not unlike films like Laurence of Arabia. There are also many moments of action and combat, something that Woo has always relished in his work. At the same time, the need to break up that combat to explain what’s actually going on forces restraint on a director normally associated with bombastic, senseless action. John Woo, restrained by his material, is a talented director; he retains an eye for cinematography through the quieter moments, and as with so many Chinese historical epics, Red Cliff is a lavish production, with superb costuming and set design. The naval ships, in particular, are stunning projects.

Chinese cinema has always favoured the historical epic; largely because the grandiose militarism on display plays comfortably into the hands of the various propaganda machines within the Chinese arts. Red Cliff is shielded to a great extent from the overt propaganda musings of other films by virtue of it being taken from a book so revered in China that they’d never censor it, and for the fact that the source material largely maintain’s China’s vision of itself anyway. The small moments within the film, such as a tea scene, reflect a deeper sense of spirituality and philosophy that helps deepen the characters themselves, and we get a good sense of their respective visions for the country. These are the best moments of the film and, as a Dynasty Warriors fan, they’re also the most useful, in giving a deeper insight and interpretation into these historical figures than we generally get in the games.

Fans of Dynasty Warriors will also get a real kick out of comparing how the various major players are represented in this film, compared to the game. It’s fascinating because, though the interpretations come from two very different places, the similarities show how authentic both film and game are to the book. Dynasty Warriors is more exaggerated in character design, but those exaggerations seek to reinforce the more realistic depictions that we see in the film. If you are a fan of the game, however, you’ll have no trouble recognising the likes of Cao Cao and Zhuge Liang, almost instantly, within the film.

The most major departure is in the portrayal of women. Historically, women played almost no role on the battlefields of ancient China, and that’s certainly reflected within the film. The games tend to rewrite history to include women in the spirit of diversity, and I certainly applaud that, so it’s a little unfortunate that those same ladies are very much backgrounded in Red Cliff, historical authenticity or no. I simply love the girls too much to not wish to see them out there as heroes in their own right. That being said, the quieter moments that I mentioned above often include women, who do challenge the men over their actions and behaviour, depicting a strength that is indomitable, despite the social restraints that they existed within.

The performances in Red Cliff range from the functional to the inspired, with the ever reliable Tony Leung as Zhou Yu, and Takeshi Kaneshiro putting forward a subtle and nuanced take as Zhuge Liang. John Woo’s never been a great director for actors, but the stories and characters in Red Cliff are so well known that at this stage it’s difficult to mess them up.

Red Cliff is one of my favourite history films. The battle of Chibi is one of the highlight moments in any Dynasty Warriors game, as befits its importance in Chinese history, and John Woo did a really wonderful job in representing that moment through cinema. With a minimal reliance on computer effects and CG animation, this is also a film that, ten years after it first released, has aged far better than many of its contemporaries.

The fast five with Leigh Harris: Taking us to space with one of the most ambitious indie games ever