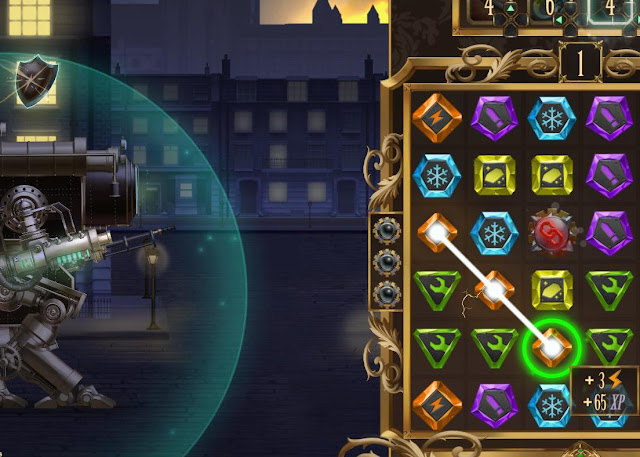 It is called many things in film and literature; unobtainum and smurf berries to name a couple. Always fictional names, always rare, always powerful. They always have the same purpose, too; these fictional resources exist to put up a mirror and show the great lengths humans will go to, putting morality and good sense aside, in order to obtain a finite resource. Within the world of Ironcast that resource is discovered during the Victorian era by the French. This new energy source is called Voltite and leads to development of mecha tanks, and you can guess where this is leading. War. Using those tanks. Over that resource.

Outside of this backstory the game’s story is told by contextualised missions set against a backdrop in which you need to resist a French invasion. The goal is to simply survive; holding things down as well as possible until the moment that the main forces can arrive. It’s designed to be intense, difficult, and surprisingly dark, given the “casual” nature of the gameplay.

It doesn’t matter with a game like Ironcast that the narrative isn’t as rich as other games, as the style of game leads itself better to contextualisation through gameplay elements. Ironcast at its heart is a match three puzzler in a steampunk world – so it’s great that there has been effort put into the narrative at all. However it is also much more than that, mixing in roguelike elements, strategy RPG elements, and that horrible feeling of permadeath. This combination alone is almost intoxicating in what it promises, and largely it executes to that promise, with difficult battles, and breathers between battles allowing for some pretty deep micromanagement that helps support some of the genres that the game weaves into its patchwork. 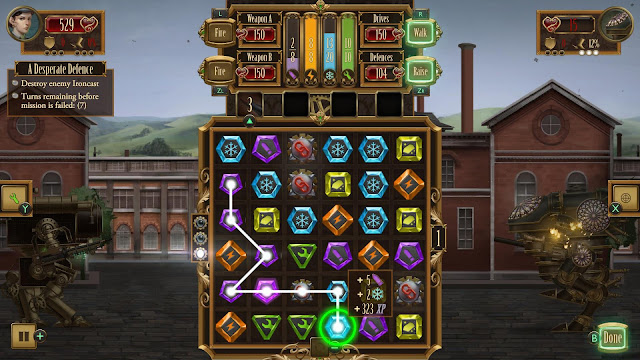 Mission objects randomise each time, offering different challenges. At times players will find themselves able to transverse in all out warfare, guns blazing and with the confidence they will win. However missions also change the stakes at times, requiring that players salvage different components of the enemy ironcasts at the end of the battle, or requiring the player to collect certain resources to advance. These missions along with the randomness of the way icons appear on the 6×6 match-3 gameplay grid offer a lot of randomness, but this deepens the strategic approach that players need to undertake to succeed; it never felt unfair.

The Ironcast on the battlefield is a complicated beast. The core of the match-three mechanism is to obtain resources to aid in battle, from the simplistic of requirements like matching icons to gain ammo, through to to more strategic resources such as coolant, repair or energy tokens that keep the machine itself working. Players will even find scrap metal resources on the field which helps to improve the Ironcast between missions. In addition to keeping the lights on, this resource management allows the Ironcast to activate a range of abilities that players have collected or unlocked for them along the way which will help assist with resource management or battle.

After each battle players are rewarded scrap which can be used to by upgrades for one of the many components of the Ironcast. Weapons, drive systems and shields are all upgradeable with various replacement parts and augmentations. Additional abilities are awarded to the player on level up which can assist in battle indirectly or change existing characteristics. 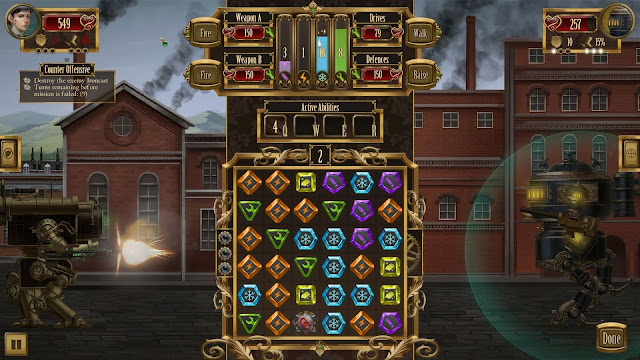 When this game was originally released on other platforms, it was a little questionable in terms of its value; it feels more suited to the mobile format, and short bursts of puzzle matching – for the same reason that the likes of Puzzle & Dragon has always been on mobile devices. So I do think that Ironcast has found itself the right home on the Nintendo Switch. In the way it plays, Ironcast benefits from spontaneous game play sessions which the Switch can provide due to its tablet mode.

The fast five with Neil Rennison: The Tin Man that got us nostalgic for classic game books