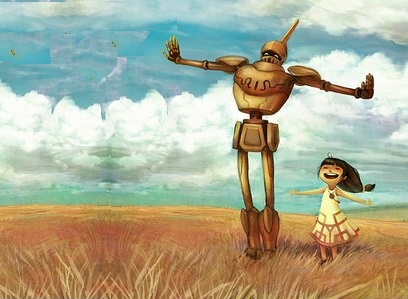 Oooooh boy is this review going to be a tough one to write. Soul crushing, even. See, the reality is that contrary to popular belief game critics don’t relish tearing down a game. Real people work on these games, and work incredibly hard on them at that. One of the frustrations I have as a critic is that at the end of the review I give the game a score and people do make purchasing decisions based on that score.

Related reading: For a game of this type that you absolutely must play, The Last Guardian has you covered. Matt’s full review.

I wish I could recommend every game I review, but I’m not going to recommend anyone play The Girl and the Robot, and that actually hurts, because it is clear that this game is made by a developer – or team of developers – that earnestly cared about what they were doing. It’s clear from the very outset that to the developers this was an emotional endeavour and the they wanted to craft something potent and meaningful. It hurts even more that the developers were clearly inspired by Team Ico’s work and, particularly, Ico itself; games that I wish inspired more developers at a time where League of Legends or the generic FPS template seems to be winning all the battles for attention.

But, tragically, The Girl and the Robot falls flat on every single level, and I feel just terrible in writing that. I’m honestly sorry, developers.

This game wants to be another Ico, but made with zero talent. #PS4share https://t.co/uPZH4ngDcc pic.twitter.com/DKehTs7aDU

The Girl and the Robot is, as described above, a game that is clearly inspired by Ico and, more generally, Team Ico’s penchant for making artistic, emotionally resonant games that don’t rely on dialogue to tell potent, deeply meaningful stories. The game attempts the same minimalist aesthetic, taps into the same kind of “buddy” system which has two characters working in concert to solve puzzles, and keeps physical threats to a minimum in order to make moments of conflict more poignant (or at least it does that at first – the action ramps up soon enough and quickly dampens that first impression). But doing all of that is difficult stuff, and it requires an eye for detail that these developers simply didn’t have. In addition, Team Ico’s games are so powerful because, underneath the emotional surface lies a nuanced, subtle story that invariable carries a dense powerful philosophy within it. The Girl and the Robot is a game that exists purely on a surface level, as though the imitation occurred without really understanding the core power of the source of inspiration.

This game, as the title suggests, features a little girl, who is weak and tiny, and who is locked up in a spire to a castle, high in the sky. After healing a bird that accidentally injures itself and crashes into her prison-room, a kindly old man (who we don’t know much about just yet) lets her out of the room. Seeing her chance to escape, she then discovers that the wider castle is populated by large robots that are, for some reason, hostile to her. Slipping past one she discovers a pendant that, somehow, gives her control over a “hero” robot, who then picks her up, carries her on his shoulder like a paternal figure, and they start their quest together (because this friendly robot is able to fight and defeat the bad robots).

In theory this is all fine. The idea of a relationship being built in a shroud of mystery is something that Ico and The Last Guardian did remarkably well. But in execution The Girl and the Robot isn’t up the task, because there’s no subtlety to this relationship. I think back to Ico, and the thing I remember more than anything is that simple act of the boy and the girl holding hands, and the way that events or the environment would work to tear them apart. The wrenching despair of being alone in a place like Ico’s chilling, crumbling ruins made that hand holding a gentle, subtle warmth and symbol of hope and familiarity. It was the way the couple moved when together that really sold it for me; the slight differences in their movement that would cause one (usually the girl, since you were playing as the boy) to fall off balance, and the sense of resistance in getting the two to move in a single direction. It was symbolic of the entire gamut of what is involved in a relationship, and it was so powerful to witness, that I struggle to actually remember much else about the game. It’s the same with The Last Guardian. The subtle, cat/dog like way that the beast would look at the boy, tilting his head in such a way that anyone who has ever owned a pet would go “awww”. The way he’d struggle to climb up ledges to stay close, and then the way the boy would then struggle to hang on to him. It was a relationship born of adversity and terror, but, again, the subtle way that the two would respond to one another was deeply touching, heartfelt, and warm.

It’s sad that those elements are so subtle that a lot of people miss them, but then perhaps if they played The Girl and the Robot they’d realise how important they are, because you certainly miss when they’re not there. Yes, the robot carries the girl on his shoulder, but he must be a very primitive robot because he does that mechanically, and then the girl sits utterly still on his shoulder – apparently trying to be as mechanical as he is. The two are often separated, but there’s never a sense with either of them that they’re yearning to be back in the company of the other. In fact, when you’re not controlling one, she or it simply stands there, utterly still, waiting to be controlled again. The partnership mechanic is as forced and labored as the mechanical operation of actual robots, and there’s no warmth or connection there; there’s never even really an attempt to establish the robot as something more than a tool in the girl’s eyes… or that the robot has any kind of personality at all.

Mechanically, the game is as labored as the narrative. The robot is the only one of the two who can fight the enemy robots, and he fights like someone who has never played a game before and decides to make Dark Souls their first. Luckily for our robot friend the enemy robots behave like they were pulled directly from a PlayStation 1 era first person game, and generally just hone in on the hero robot in a straight line, allowed themselves to get caught on scenery and the like. The game is filled with puzzles that generally require the two characters to split up so they can operate switches and open doors for one another, and while these puzzles work (mercifully, I encountered no game ending bugs like I expected I would after my first impressions), they’re neither inspired nor interesting. 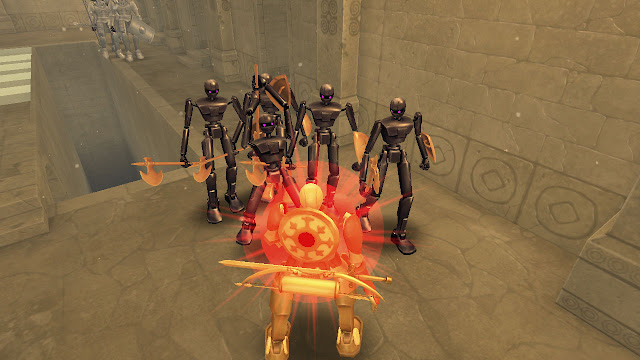 There’s a beautiful little soundtrack at points, and whoever was responsible for the music deserves recognition for that, but the art is almost entirely functional and/ or arbitrary. Maps are built like they were taken directly from a manual on making your first haunted castle design, and the lack of meaningful environmental storytelling further hurts a game that’s aiming for the nuance of Team Ico’s work. Whether it was Ico, Shadow of the Colossus or or The Last Guardian, each new place that I discovered felt like it had a purpose and lore behind it. The clean, empty environments of The Girl and the Robot have no such sense of lore to them.

The end reality is that The Girl and the Robot is like what would happen if I tried to write a Shakespeare play. People would pick it immediately as a (deeply) inferior pastiche, because it might emulate the style of its inspiration, but it would be a faint imitation in every way that actually counted. I love the development team for caring enough about the artistic side of game development to want to emulate the work of the pioneers in arthouse games, but even if I was to forgive the amateur mastery over the game engine and the weak “gameplay” elements (and in theory I can do that), the complete inability for what is meant to be an emotional game to strike any kind of emotional chord with me is just impossible to overlook. I hope the developers are able to take the experience from this game and build on it, because the industry needs more people like this than it does indies churning out yet more pixel shooters and aspiring eSports games, but The Girl and the Robot is a lost cause, I’m afraid.