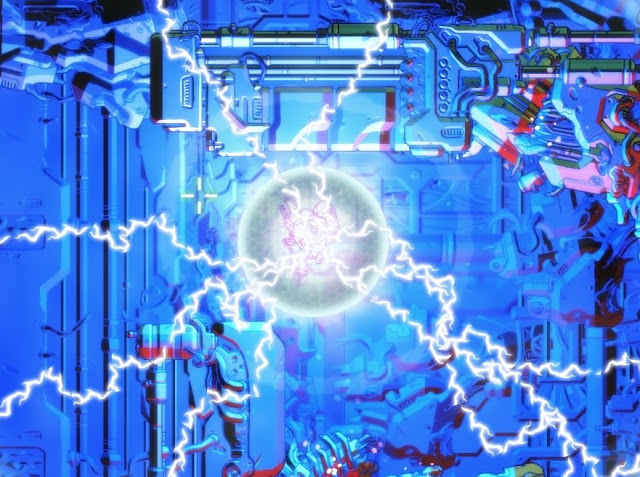 Cryptark is a fast paced action tale of a salvage crew on a contact to salvage a derelict ship floating in a corner of space. While there’s more than one way to go about this job there’s only one thing that’s important above all else: don’t go over budget.

You start off with fifteen hundred thousand in credit, but it won’t take long to burn through with ammo costs, repair kits and new gear. It sounds so easy at first, but you have to not only use that money to buy the right stuff, you also have to pull the job off first and that’s the hard part. Fail and you not only lose the investment, but you’re down one hundred thousand in rescue costs to carry the body back to the crew’s ship.

The minimalist storytelling relies on the gameplay experience as you explore each ship. While there’s a bit of an experiential narrative built in through the results you gain from each delve, it’s also a bit of a missed opportunity because it’s the kind of game that I wanted to get more involved in. There’s real potential in the idea of the salvage crew, and the tiny bit of banter between them suggested that the game could have had a fun personality to go with the action. I can appreciate the developers wanted to get people into the action quickly, but giving context to the game would have made it that much better. 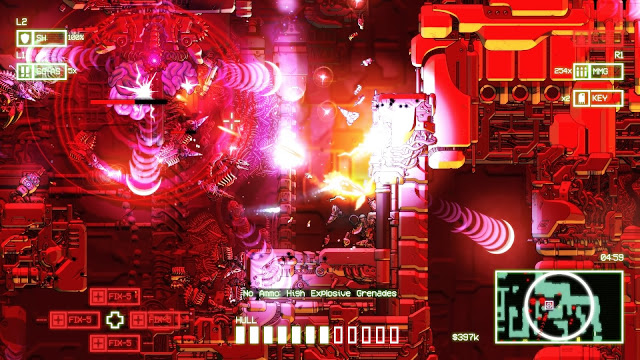 But, if you’re looking for sheer fast paced gameplay though you’ve come to the right place. With your pilot’s suit being able to support a four module loadout it’s entirely possible to strap on four sets of machine guns to blast your way through each wreckage and their automated defenses. Now equipping four separate machine guns would be a waste of space as you can simply add more ammo and bring along a bunch of other toys adding versatility to the different situations. Shotguns, shields, grenades, long range cannons and various models in between can all be equipped; as long as you find them first.

The ultimate goal of your crew is to salvage the Cryptark. To get there you have to go through five derelict husks first. Other than to survive while exploring the interior of these giant metallic structures there’s only gone real goal that needs to be achieved and that is to take out the central nervous system which is quite literally, a multi sectioned brain with defenses of its own. That’s it. Blast it out of existence and the derelict wreck and its bounty belongs to your crew and you can set off towards the next one.

While the idea is simple the execution of this can be anything but. Each wreck can almost be viewed as a living being with its defensive systems being akin to an immune system. Alarm systems, drone producers, shield generators, nuclear modules that set any other defense system to explode spectacularly when destroyed and repair nodes will all work together in order to repeal your would be salvage operation. These systems may not always be interconnected but you can be sure that some will be a nuisance to your advancements. Others, such as the brain, will link up and be protected by the shields which are sometimes so far away that by the time you make it there the repair system is almost already done repairing what you’ve destroyed. 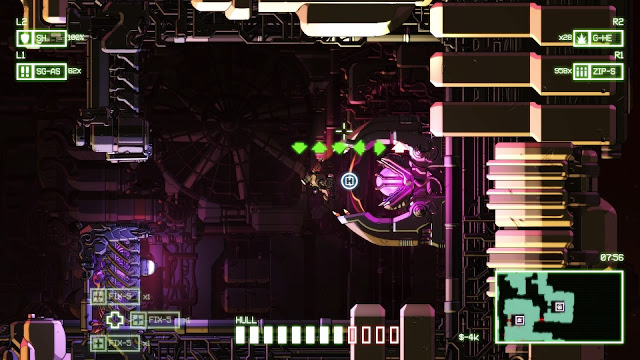 In between all of these nodes and modules are ammo and repair pods that can be used if things have really not gone according to plan. These also generally cost money sometimes making an easy job cost more than you’ll receive in return even with completing the bonuses. To compensate for this there are also nodes that allow for you to pick up research tech in order to unlock new armaments which can really help to level the playing field as without it, your crew goes home with nothing and that’s the end of it.

Everything in Cryptark comes down to money. If you run out that’s it and whatever progress you’ve made up until that point is gone. The only thing that crosses over is if you can complete some in-level conditions to acquire an artifact. These can be a pain to get, especially in the later missions because of what is sometimes asked of you; finish a salvage mission with the shield units still on, or finish one with only three nodes left intact.

Sometimes these missions are so ridiculously difficult that you just won’t bother. If you can however, these artifacts allow you to unlock difference classes of machines that have different starting loadouts and abilities. For example, the default machine allows for a dash but the Rook allows for an ultimate defense that can survive nuclear blasts. These machines add a huge amount of variety to the gameplay, but they have to be unlocked first. 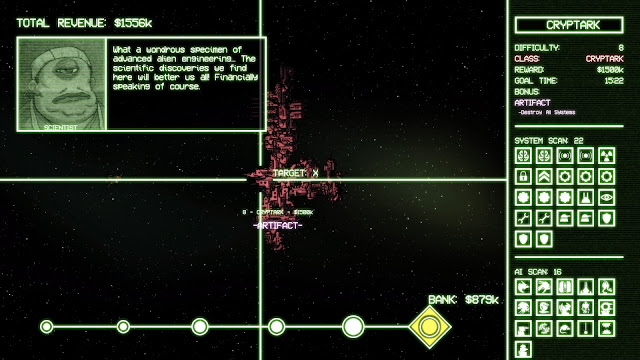 Overall Cryptark is a great, albeit limited, fast paced experience. While it could have benefited from having a greater narrative scope and dialog between the characters, the action and replayability will be more than enough to keep you going for a long time.