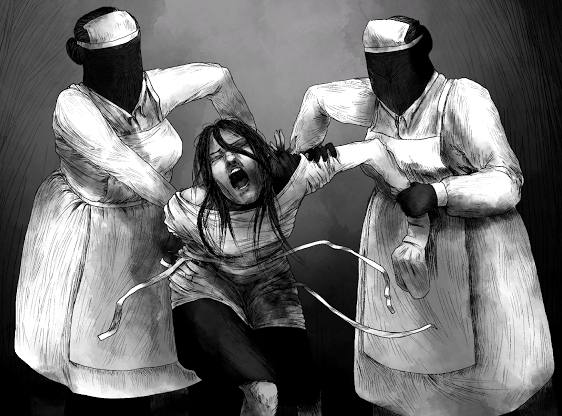 As I sit down to review The Town of Light, a wave of extreme pressure is washing over me. Not only are the topics tackled in this walking simulator extremely heavy, the events are based on documented cases at a real European asylum (Volterra) early in the twentieth century. I’ve been following The Town of Light closely since its announcement, which detailed the game’s premise: the player becomes Renée, a (fictional) schizophrenic girl exploring the mental asylum that imprisoned her during her teenage years.

With regards to the gameplay, there really is very little to explain. “Walking simulator” is the best description of The Town of Light, as Renée slowly explores the grounds and building that still encapsulate her soul. She cannot run. She cannot jump. She can interact with the environment in limited ways: spinning on a decrepit playground merry-go-round, flipping switches, opening unlocked doors, reading documents/maps, and pushing a wheelchair are the extent of Renée’s capabilities. Instead of focusing on her actions, the emphasis is placed on her memories as each is triggered by a new location in the asylum or on its massive grounds.

The Town of Light is touted as a horror game, though as far as games go, it’s not the standard approach to the genre. There are no jump scares. There are no monsters hiding behind broken furniture. The horror is in Renée’s memories, the flashbacks to the experiences that continue to haunt her. There are slight changes in how she perceives the world around her based on how the player “speaks” to her, or chooses to answer her questions, but regardless the outcome is utterly horrific. The abuse this girl suffered at the hands of those she was meant to trust is sickening. It’s upsetting. It’s uncomfortable. It forces me to face parts of my life I would rather keep buried in my own personal version of the mental asylum, or my own personal hell. The game is as steeped in horror as any I’ve ever played, yet I cannot find a single other that it can be compared to.

The horror is in the silence. It’s in the inaction. Each room echoes with memories of the forgotten ones, those in society who need help the most but instead are left to rot – and that’s if they are a lucky one. The others, like Renée, have special interest taken in them. But the insane have no grounds to fight back. They are, after all, crazy. Who would bother to believe them?

I do. With a heavy heart, I have found myself weeping for these souls many times. I am certain Renée, or whomever she is based off of, wasn’t the only one. There is no way she was the only victim of abuse at the hands of her caregivers. The further this idea is considered, the more upsetting it becomes. I find myself wanting to somehow apologise to all those in the world ever forced into a situation of abuse because they were unable to help themselves.

As she returns to the asylum in the present day, Renée’s psyche retreats back to when she was sixteen. Her voice softens, and she sounds confused yet curious. At the beginning, the player is dropped right in front of a playground; its innocence representing the beginning of the end for all those who entered the walls of the asylum as a patient. The further Renèe explores, the further you can hear the regression in her voice. The fear heightens. The confusion heightens. I want so desperately to help her, but each step further highlights another shocking incident. I begin to wonder if Renée really is schizophrenic, or if the symptoms presented were actually due to the situations she is placed in and a natural human response to trauma. 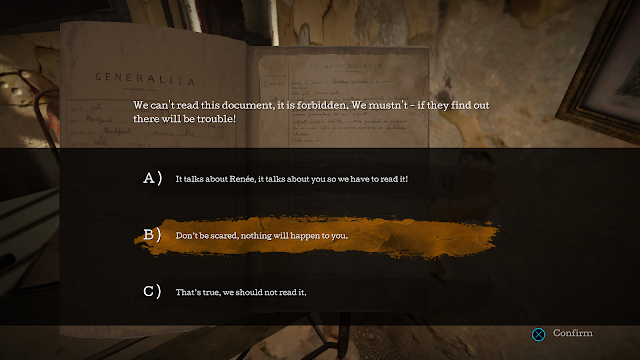 The story path is somewhat non-linear, based on the decisions you make when answering Renée’s mental questions. It is heartbreaking when you believe your answer is supportive but it is taken in a negative way, but you must keep pushing forward regardless. Renée’s mental notes serve as somewhat of a guide, leading the player to where the next flashbacks will occur. She begins at the entryway, which feels safe. The front door is right there. It’s open. I can leave. Renée can leave. But she slowly ventures farther in. She goes upstairs. She travels on temporary construction paths to find herself in a dark basement. Each step feels unsafe, as though I am leading Renée to her doom instead of protecting her from it. Despite any decisions made, I am only an observer.

I cannot change the past, I can simply witness Renée’s version of it.

Every story has many facets. I am sure Renée’s is no different, which is difficult to be mindful of. Was her abuse the result of a long chain of victims becoming perpetrators? How many people knew what was happening but turned away, because those with mental illness weren’t “real” people? 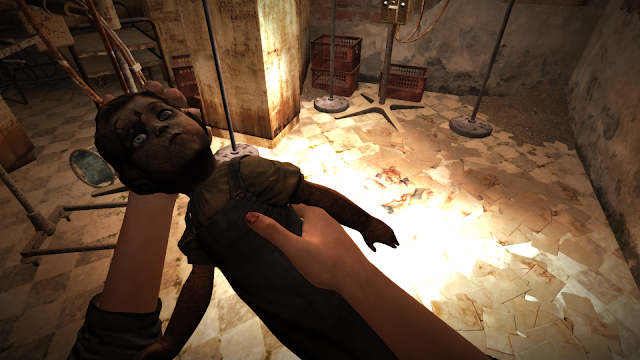 Renée does have one companion she can trust in the asylum: Charlotte, an old doll to which Renée has unwavering dedication.  She believes Charlotte to be her protector, so she aims to keep Charlotte safe in the asylum. I wish Charlotte was utilised more in the narrative, because otherwise this is a masterful storytelling experience.

Related reading: If you’re interested in a more jump-worthy indie psychological horror game, Layers of Fear may be up your alley. Lindsay’s review here.

I am not schizophrenic. But I do have a long, dark history of major depressive disorder, severe anxiety, and borderline personality disorder dating back to my early childhood. I don’t remember a time that I wasn’t terrified of the outside world and judgement. If I hadn’t been raised where I was, when I was… I could have been in Renée’s position. I could have been there so easily it is actually shocking to a degree.

My heart remains heavy, even after getting these thoughts out. The stories of abuse victims in Italian asylums have been told, somewhat, to a tiny degree. Renée is likely a compilation of many stories, which begs the question: how do we fix this? How can we, as humans, begin to apologise to those wronged on such a basic level? How can we take back treating those with mental illness as “lesser” humans in the past and prevent it in the future? Is it possible for retribution to be made? I cannot thank the developer enough for The Town of Light. Not only are we beginning to acknowledge the injustices our ancestors committed, we are exploring how to prevent it from happening again by telling these important stories instead of burying them.

The fast five with John Kane, developer of Mallow Drops (and plenty more)