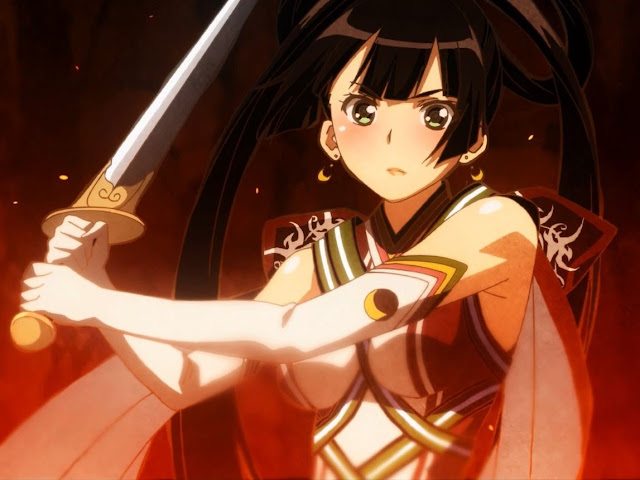 Related reading: An in-depth interview with the CEO of Kadokawa Games on God Wars, what it means to him, and what he was looking to achieve with the game.

The latter, and we’ll call them “Japanese experience” games for want of a better term, are less common, particularly with regards to English localisation. One of the best PlayStation Vita games, Oreshika, is one. The newly released God Wars is another of these rare treats. And God Wars is once very powerful game.

God Wars tells a story that the CEO of the developer, Kadokawa Games, Yoshimi Yasuda, has wanted to tell for some 30 years. It tells the story of a young girl, Kaguya, who has been kept imprisoned as a potential sacrifice to Mt Fuji to appease the gods, should they turn angry and demand a sacrifice. It tells her story, as well as that of Kintaro, a young warrior with a bear “pet” (Kuma) as a pal who decide to rescue this girl and set off on a quest to follow her mother and figure out why she needs to be a sacrifice at all. God Wars also tells the story of a large number of supplementary characters that work with – and against – this little band on their journey. 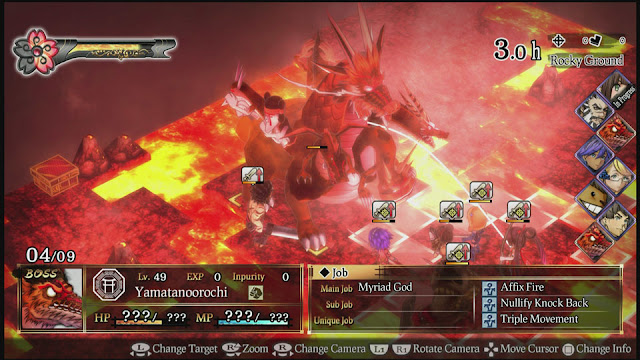 The names I just mentioned above probably won’t make much sense to you unless you’re a student of Japanese mythology and folklore, but Kintaro, Kaguya, and many of the other characters found through God Wars are loosely based on figures from Japan’s traditional stories as well known domestically as Red Riding Hood or the tortoise and the hare are to us. There’s enough creative license taken with them that they’re distinctly different characters to the lore they’re drawn from (and what they get up to is completely different), but there’s enough of a base level similarity there that the game quickly builds a sense of authenticity to the very old history of Japan. The game was designed to feel like something of a “lost lore” and it works very hard, and uses a great many words, to try and reinforce that conceit. God Wars isn’t quite the balance of visual novel and tactics JRPG that Utawarerumono was, but it’s a firmly narrative-driven game nonetheless, and relies heavily on you becoming connected with the characters and story to remain interested in the game itself.

And to be frank, there’s a lot of Japanese-specific cultural references and views on the world that I suspect won’t resonate so well with western audiences. Even those that generally like Japanese games. God Wars delves deeply into the Japanese Shinto sense of spirituality, for example; the animism of that faith that everything has spiritual force and power, and the idea that “Gods” are just manifestations of this power, and are ultimately ruled by the same set of emotions and character flaws that drive humans. In the context of this game it might come across as odd to some that human characters are talking and interacting with these Gods, who look and behave essentially like humans.

Indeed, the game is so laden with Japanese folklore-specific names and jargon that elements of the plot will be difficult for those without the background knowledge to follow at all, and that’s a pity because God Wars actually has a quite beautiful, sentimental, and emotionally touching narrative and I found it completely immersive. It’s also helped by the presentational elements, with the music and art direction perfectly capturing the Japanese aesthetic. Traditional Japanese culture has a very distinct approach to art and sound, and it’s clear from the moment that you start playing God Wars that the development team worked painstakingly hard to properly immerse themselves in that traditional art before working on this game. 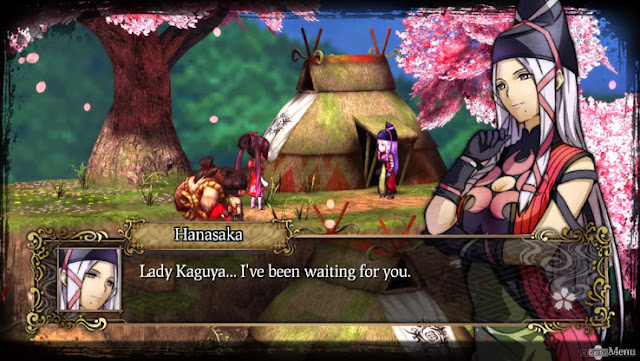 Equally odd will be the way the game discusses some of the greater questions out there about humanity’s relationship with nature, with its spirits, and between people. Kaguya and her team are effectively on a quest for knowledge, and the revelations that they take as they go along will appear to some (many) of us in the west as just as esoteric as what a Japanese person might feel of western ideology after reading a book like The Pilgrim’s Progress. It’s easy to gloss over the esoteric as being irrelevant by virtue of being too different, but there are some meaningful insights to draw out of the game if you give it respect and appropriate attention.

Unsurprisingly, the gameplay of God Wars is a classical, traditional take on the tactics JRPG genre, and that’s exactly what the narrative needed to support it. In each battle you’ll take a small crew of characters into battle with another small group, and the action plays out in a turn-based fashion, with faster characters moving and attacking before the slower characters. There’s quite a lot of character customisation available, however, which is a nice touch. Each character can have up to two jobs, and you can mix and match these at will, with each job having a large number of unlockable perks that can help strengthen the character, or give him/her additional skills in combat.

There’s a reasonable need to grind thanks to a fairly tough difficulty curve, and unfortunately for the game’s pacing, some battles can become really drawn own affairs when certain enemies have just too much health to work though. They might not have the necessary firepower to win, but it’s a relatively dull affair watching turn after turn slide by as you slowly whittle down the opponent’s health while not really facing an insurmountable danger yourself. 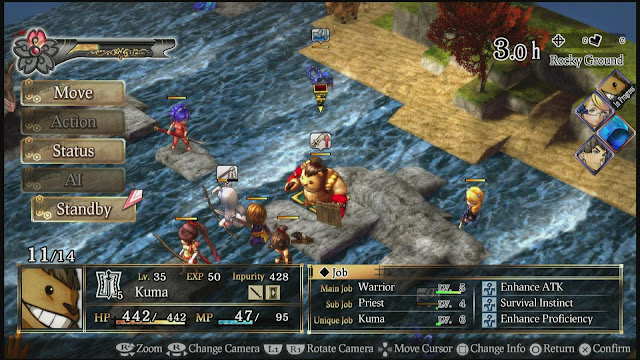 On the other hand, when battles are evenly balanced, there’s a delightful need to really work with all the character’s different skills, and bring together a cohesive strategy. Piling defensive and protective spells on to a single character, and then having him use the “Taunt” special ability to draw enemy attacks is a strategy that most tactics games have, but few have made me want to use it. God Wars, somehow, has been balanced just right so that I found the most success in playing with a wide range of different character abilities, and having individuals work in collaboration with one another in complex ways, rather than the standard tactics format where every character just focuses on doing damage to the enemies, with the exception of the healer class, which bandaids up any character that gets hit in return.

The only part of God Wars that I found genuinely grating is generally irrelevant to the rest of the experience, but an unnecessary flaw in a game that was otherwise so precise in its design. The equipment and inventory system is laborious. It’s standard for JRPGs to provide players with a comparison of stats when their heroes are in a shop buying new equipment; stats that show the strengths and weaknesses of the goods on sale compared to what the hero is currently wearing. God Wars’ shops don’t do that, unless you go into a separate menu, “try it on,” and then painstakingly check each piece of equipment against each character, one at a time, rather than have all that information presented across all characters on a single screen, as has become standard. I wasted more time than I wanted to in God Wars’ shops.

But of course the game’s strengths render that complaint completely irrelevant. What makes God Wars a special experience is the deep respect and love for Japanese tradition that emanates from every second of its run time. The general ignorance of the west towards Japanese folk stories and philosophy mean that this is a game that a lot of people will scratch their heads over. This includes those that generally likes the games that Japanese creators make with the western market in mind. But I hope it’s a game that others embrace as a stepping stone towards understanding a history and culture that too many are too eager to dismiss as “weird” or different.