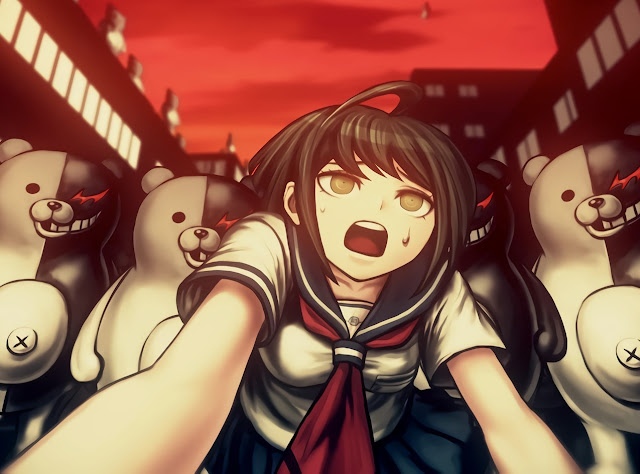 Danganronpa: Ultra Despair Girls was a very different game to the two original visual novels that so won fans over on the PlayStation Vita. Those games were interactive mystery novels that mixed humor, serious themes, and a touch of fanservice together to create two narratives that were smart, fun, and had large casts of memorable, interesting characters.

UItra Despair Girls, as a side-story set between the two Danganronpa titles, is instead a combination of puzzle and action shooter game which really dialed just about everything up to 11. Featuring Komaru Naegi, the sister of the main character in the first game, and Toko Fukawa, the fan favourite shy writer girl that would turn into a homicidal maniac every time she sneezed, Ultra Despair Girls tasked players with shooting down hordes of Monokuma robots, taking down hulking bosses, and navigating through a surrealistic and often horrific narrative. I can honestly say it is the most different shooter you’ve ever played, and while it didn’t sit well with everyone, I found it fascinating.

Related reading: For more thoughts on the game, read my review of the PlayStation Vita release here. As I noted at the time, the first time though this game can be deeply unsettling. I’m desensitized to it now having played it a few times, but that review is worth noting for newcomers.

To get this out of the way first; that game doesn’t “blow up” well on to PlayStation 4 from its PlayStation Vita roots. Ultra Despair Girls was always a functional PlayStation Vita game, with simple character models and quite basic environments. Where the Danganronpa visual novels enhanced nicely to PS4 thanks to their strong art style and text-and-2D-character-models design, Ultra Despair Girls, as a fully 3D game, looks quite primitive on the big screen, with minimal texturing and blocky character design being its two biggest crimes. There are moments where a strong visual design shines through – such as when the game renders flames as 2D cut outs in that distinctive, overcoloured Danganronpa style, but for the most part it’s hard to get past this game being one of the less attractive uses of the PlayStation 4 hardware. 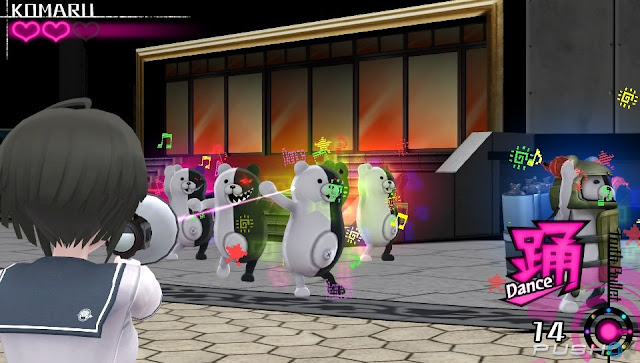 But then Ultra Despair Girls was never about the art or technical precision. This is a game that has a really strong story to tell, and that works just perfectly on PS4, as it did Vita. In Ultra Despair Girls, your two protagonists are trapped in a city that has been overrun by Monokuma robots, being controlled by a group of kids that have decided to kill all the adults in the city. Given than our two protagonists are close enough to adult age, they’re targeted as well, and thus starts the desperate fight for survival.

There are plenty of stories out there about children rebelling against adults. Earlier this year, Persona 5 itself took every opportunity it could to show how its protagonists saw the adult world as one of corruption, hypocrisy and greed. They were positioned (generally) as heroes for this stance in that game, though, and that’s where Ultra Despair Girls is different. On the other end of the spectrum to Persona 5 is an old Dungeons & Dragons Ravenloft module I have loved over the years called The Created, in which all the adults of a village are slaughtered by a demented child-like living puppet (Pinocchio gone psychopathic) so that all the children could play and be free forever.

Ultra Despair Girls takes after the latter so closely I wonder if the game creators were fans of that module themselves, only that it replaces evil Pinocchio with a bunch of violent, vicious, mentally broken children. The thing is, though, these children actually had a really good reason for what they were doing. 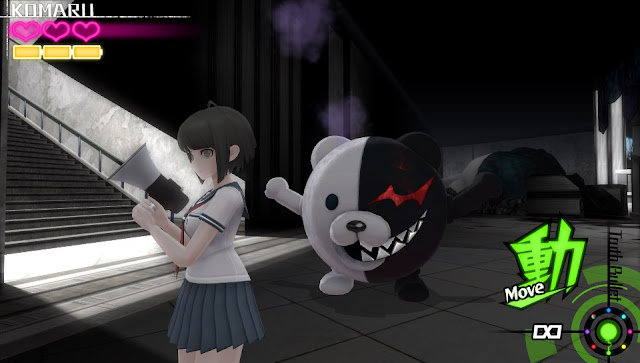 As Komaru and Toko fight each of the game’s “boss children” we come to understand that, in actual fact, they’re all quite tragic stories, and their hatred towards the adults was driven by how significantly they were let down by them. To give the easy example – one of the boss children is a little girl that was a  child model, and was sexually abused by the adults around her. Now she’s a terrifying sadist, making games of the kind of sexualised violence inflicted on her as she now inflicts it on others. She’s the most sickeningly terrifying example of how the adult world can let down children, but each of the other kids have, in their own way, equally horrific back stories that are designed to symbolise the many ways society too frequently lets down children in the real world. So, while we are meant to see these kids as the enemy, and of course in murdering the entire adult population of a city they did a little more than simply get revenge, we’re also meant to be sympathetic towards the horrors that they’ve been through that has led them to this place. And then of course, as with all Danganronpa games, there’s the big revelation at the end, which I won’t give away for those who haven’t yet played it, which will have you thinking all over again.

As Komaru and Toko explore the city, looking for an escape, they also come across various adult survivors, and their own stories are just as tragic and miserable. While Ultra Despair Girls is willed with humour, it’s also placed within the context of unrelenting horror and misery, and while it’s not necessarily obvious from the screenshots, it can be a pretty intense game at times.

It’s the humour and fanservice that really keep the game from being out-and-out horror, and it’s my kind of humour, being quite self-aware and a deconstruction of various common tropes to Japanese anime games in nature; much like in Danganronpa itself. Toko, for example, regularly has fantasies about Byakuya (who she becomes slavishly devoted to in the first game), and those scenes are presented as satires of a genre of highly sexualised anime designed for women that are popular enough in Japan, but less frequent out west (which is a pity, because many will therefore miss the real jokes in these scenes). Komaru, meanwhile, is a walking satire of typical otaku fanservice tropes. She spends the entire game wearing a school uniform because, as we’re told at the start, simply because that’s what she does. Later she’s captured and tortured, only, rather than being a typical torture scene, it’s a sature of the groping minigames that are so common in fanservice-heavy anime games (with the great joke being that for the first time in history you actually have to stop the groping). Many will find it too over the top and silly for its own good – or they’ll miss the humour entirely and see the game as straight exploitation – but as an exercise in extremes juxtaposed against one another, I find the dark narrative, heavy fanservice and sharp satire to be a really appealing and distinctive mix.

Related reading: It is, of course, best to have played the “main” two Danganronpa games first. Matt’s review of the two on PlayStation 4.

As with the main Danganronpa games, there’s a number of serious subtexts to Ultra Despair Girls, and actually digging into these themes makes it clear that the game’s a lot smarter than it might appear at first. To this day I wonder why the developers even bothered with the action gameplay, as I find it to be the least engaging part of the overall experience, and a largely unnecessary distraction in between the narrative bits. You’ve got access to a “gun” (which looks more like a megaphone) that can use a large number of different “bullets” to solve the game’s problems and puzzles. The Monokuma robots themselves can be simply shot using the standard bullet, but at other times you’ll need to shoot special bullets to move objects around, activate switches, and so on. The system works, and the game throws some trying mind-bending puzzles at players at times, but the game still would have worked just fine as a visual novel, like its predecessors.

That being said, it’s great that we now have all the Danganronpa games on PlayStation 4, ahead of the big release of Danganronpa 3 later this year. Ultra Despair Girls might be an outlier, and even a game that only the most hardcore Danganronpa fans will ever truly appreciate, but underneath that hood, it’s a smart one, and has a wicked sense of humour to boot.