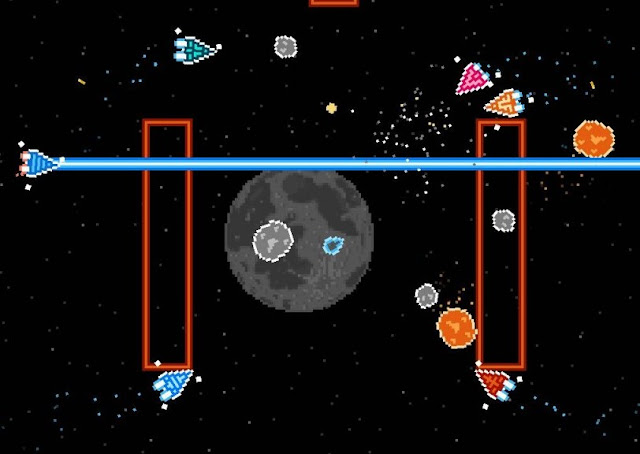 One of the first games ever released was called Spacewar. In that game, two players controlled ships which rotated and moved in an unwieldy way, trying to shoot the other ship before their own was destroyed. AstroDuel Deluxe for the Nintendo Switch is what Spacewar would look like in 2017. It offers dolled up retro graphics and balanced with a party flair, but it’s still the same simple dueling game which started off the entire medium back in 1962. Developer Panic Button nails all the intrinsic fun of shooting your friends in space, but a lack of features and variety hold AstroDuel back from being an excellent party game.

If you’re too young to remember Spacewar, you’ll definitely recognise the control scheme from another iconic game – Asteroids. Movement is loose and imprecise, so that you’ll never go exactly where you want, and the same can be said for shooting. Ships have had their bullet counts significantly reduced to a maximum of three shots in quick succession, although ammo regenerates over time.

AstroDuel is a game about precise aiming fumbled through slippery controls, and it’s pretty hilarious watching new players trying to aim and missing their mark entirely. Once you’re hit, your ship is destroyed and you’re forced to float around space defenceless for a little while, at which point the enemy must either shoot you again or run you over before you regenerate your ship back. It’s these precious seconds where AstroDuel shines: the asymmetric panic of one player trying to shoot a wobbly gun at another player who is floundering for their life. Just a little caveat, the animation for running over an opponent is surprisingly brutal for an 8-bit game, so take care if you’re looking to share this one with younger players. 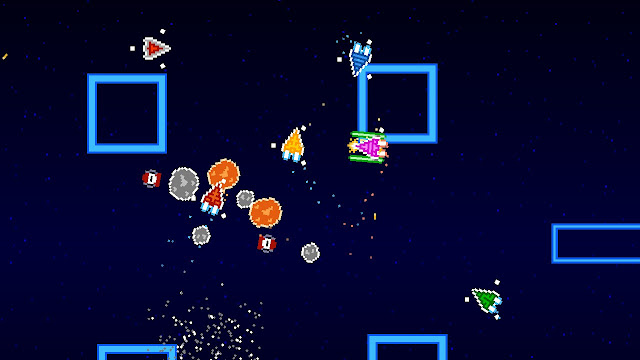 Unfortunately, that’s the only real trick AstroDuel has up its sleeve. The game’s 17 different maps are well varied with a ton of interesting mechanics, but each round takes less than a minute to complete and it won’t be long before you and your friends will be keen for something different. The same can be said about the game modes – there’s deathmatch, team deathmatch, deathmatch again except everyone has just one life, and the team version of that. There’s also a touch-screen mode where four players share the same Switch screen and can only shoot or turn left, which turned out to be the standout of the bunch.

The game’s balance is also not the most conducive to extended play sessions. This might be a personal point, but I found powerups were a little too impactful: being able to leave a giant area-of-effect mine or deflect bullets from your front side tends to guarantee that player the win, which means matches will devolve into who-can-get-to-the-powerups fastest. All this means that AstroDuel is a game best saved for quick 15-minute sessions.

With the right crowd of people, AstroDuel is a neat distraction which remixes classic game mechanics into a frenetic party experience. It doesn’t last long however, and once the initial novelty has worn off there’s not much reason to return to this one. If the Switch didn’t have a variety of party games I’d be more inclined to recommend AstroDuel, but this console is only a few months old and already boasts Mario Kart 8, Jackbox 3, Just Dance and SnipperClips. This is a console that does not need lesser local multiplayer experiences to bolster it up.