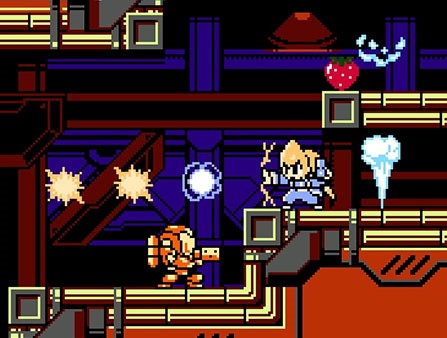 Mighty Gunvolt Burst comes at an exciting time for the Nintendo Switch – it’s the first hardcore platformer available for the console, and it arrives before Nintendo’s own Virtual Console does so it won’t need to compete with the retro games it aims to emulate. Inti Creates is a studio adept in the modern-retro style by now, with a hand in the excellent Azure Striker Gunvolt and the mixed Mighty No. 9, both of which form the basis for Mighty Gunvolt Burst. This is very much a “greatest hits” game, featuring characters from both series as well as additional character Ekoro from Gal*Gun, due to be patched in later. After the protracted development cycle of Mighty No. 9, the stage is set for a redemption play from Inti Creates to win back the hearts of Mega Man fans.

Which is unfortunate, because from the very beginning Mighty Gunvolt Burst falls into a lot of the same pitfalls that Mighty No. 9 does. The mechanics don’t gel together properly, levels play out blandly and the challenge is obligatory. It seems like the designers were told that the game needs to “feel hard”, and they satisfied this requirement by deliberately inserting kill-points so that the player dies at least a couple of times on their first try. Either it’s an invisible enemy on the edge of a bottomless pit, or a set of spikes conveniently out of sight, or a crushing death trap in a hidden room with a powerup. 90 per cent of your deaths in this game will be of the instant variety. That being said, it doesn’t feel nearly as cheap as it did in Mighty No. 9 – checkpoints are fairly generous, kill-points aren’t as frequent, load times are fast and dying is virtually free of consequence.

The other similarity to Mighty No. 9 is the Burst mechanic, which rewards players with extra points by killing enemies at point blank range. It functions just like the dashing-into-enemies shtick and is just as cumbersome: levels and enemies are mostly designed around your character’s ability to shoot across the screen. Mighty Gunvolt Burst’s other unique mechanic is the ability to synthesise your own weapons from parts found scattered around the levels, and this mechanic’s uniqueness is negated at point blank range. Just do yourself a favour and pretend Burst kills doesn’t exist – you’ll enjoy the game more. 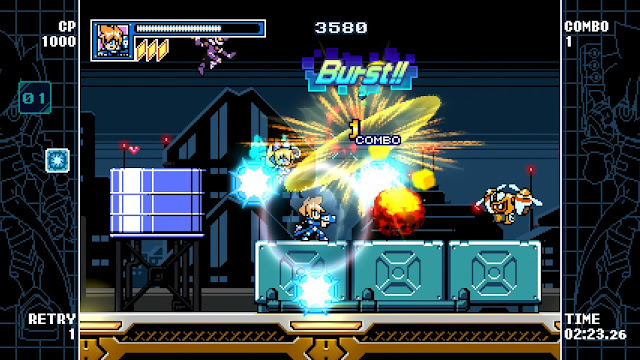 It’s been a pretty average experience so far, but just wait until you fight your first proper boss. The boss fights in this game are incredible. I don’t feel like I’m exaggerating when I say they are better designed than anything in the NES Mega Man games, and even some bosses in the Mega Man X series. Every single boss is an amazingly well-crafted challenge, with unique attack patterns, key vulnerable points and a variety of effective strategies to victory. Boss attacks almost always fall into the perfect sweet-spot of easy to predict yet hard to dodge, and last long enough that beating them is a triumph. Burst’s bosses are the same character designs from Mighty No. 9, but once you compare the fights in the former to the latter, you will be completely sold on this game.

Boss fights are complemented well with Mighty Gunvolt Burst’s weapon-crafting system. By collecting certain goodies found in secret areas within levels, the player can modify their weapon into something entirely different. Imagine fighting a boss who floats in the air for most of its patterns, and grinning smugly as your bullets curve upwards to hit him. Weapon-crafting in Gunvolt Burst feels like a creative extension of Mega Man’s weapon collecting, and for those who aren’t partial to a menu-based customisation system in their run-and-gun platformer, all levels are perfectly beatable without upgrades.

Game length can also be a concern too, since following the Mega Man formula leaves Mighty Gunvolt Burst with an intro stage, 8 main levels and 3 endgame levels summing up to around two hours per playthrough. There are two difficulty levels and two characters with minor differences (with Gunvolt being much better than Beck), some achievements to earn and a lot of randomly dropping collectibles to pick up. I would have liked levels to have been more conducive to the different playstyles that weapon-customisation allows – in the current state they’re passable, but replaying them is a chore. I instead spent most of my playtime making unorthodox weapons, and seeing if they were viable in the Boss Gauntlet. 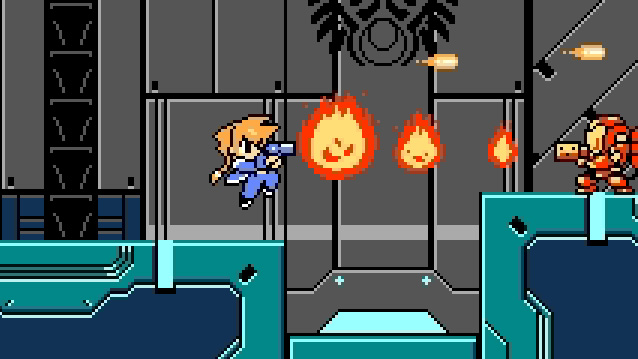 Mighty Gunvolt Burst is a great example of a mixed game. It features many mechanics which don’t add to the experience as a whole, and some awkward design choices which leaves some levels feeling cumbersome. It also shines brilliantly in key areas and proves that the creative teams at Inti Creates can still hold their own in the new-Retro genre. The whole effort is leaps and bounds ahead of Mighty No. 9, perhaps owing to the lack of fanbase threatening to withdraw their support if the game wasn’t at least 90 per cent similar to Mega Man. Mighty Gunvolt Burst suffers some early shakiness trying to find its own voice, but it’s not long before the game will win you over.