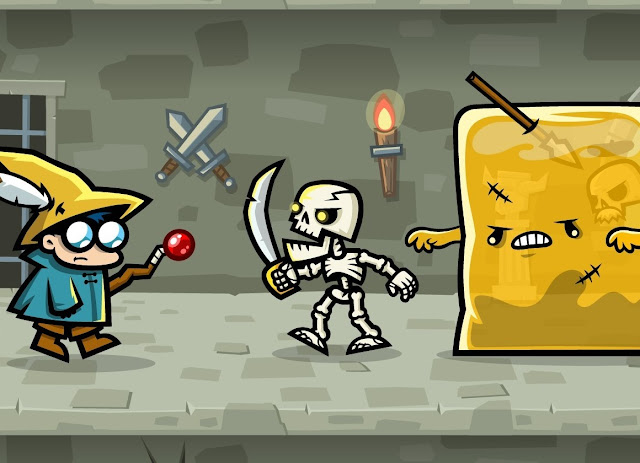 “You’re a wizard, Harry… And a thumpin’ good one, I’ll wager, once you’ve been trained up a bit and can spell long words with random letters quickly while using a joystick and remembering odd button choices.”

Yep, the plot of Harry Potter would have played out much differently if this were the case. For all we know, Harry was dyslexic or had a janky thumb — okay, we all know that one isn’t true, or he wouldn’t be nearly so great at Quidditch or even flying a broom. My point is, Spellspire is like a mash-up of Scrabble and the Wizarding World, yet it lacks a certain spark that it needs to stand out from the crowd in an oversaturated market.

The story in Spellspire is vaguely RPG-like in that you’re a young wizard (hiya, Harry!) trying to progress through various monsters and obstacles, although quite frankly I’ve already forgotten the reason why. So ‘Harry’ (sorry, I’ve named him now, it’s quite unofficial) needs to get to the top of a 100-story castle using only his wits and his wand to… do whatever young wizards do at the top of towers. It doesn’t matter, because it turns out that killing things with words is fun! I’ve whined a bit while playing that I’d rather be playing on mobile, yada yada yada, but the truth is I only complain when things get hard. I am more than happy to pay for a quality game like this versus use the free-to-play model the exact same game is using on the App Store. 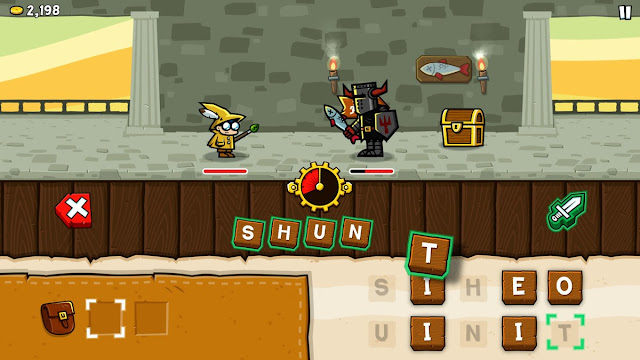 Gameplay is straightforward: defeat a tower level, earn coins, level up skills and gear, buy new equipment, choose the proper equipment per battle, and spell spell spell to defeat the evil that lurks within the castle walls. Being the cocky girl that I can be sometimes, I figure this would be a cakewalk. An hour or two and I could come back to write this review, all witty and glowing because I’m a genius and could spell all the words and defeat all the monsters and here I am, unscathed. But no. Instead you get cranky, run-on sentence Lindsay because the game is deceivingly difficult at times when you get on a bad streak.

I am not judging Spellspire for my bad streaks: each one is my own burden to bear. Yes, sometimes the game was mean and would throw in a Z with mostly consonants, but when my skills would wane it usually means it’s time for an upgrade, time to revisit a level, or time to take a break. Wizards don’t need breaks, I don’t think, but I sure do; it’s a drawback to being a muggle (or no-maj). I’ll stop with the Harry Potter references now, I swear.

The wonderful thing about Spellspire is the developers’ keen understanding of curve difficulties, level progression, skill progression, and item upgrades. Whenever I felt “stuck” I wasn’t truly stuck: even with no gold to my name and a wand made with a stick, there is always room to grow. The first step was always trying the level again, because nothing can throw you off like a bad set of letters. The second step was to check the shop — if I’ve got gold rattling in my pockets, I may be able to upgrade my wand, my robe, my hat, or my base skills. Upgrade costs start small but grow as the game progresses, always in a way that makes replaying necessary but not cumbersome. 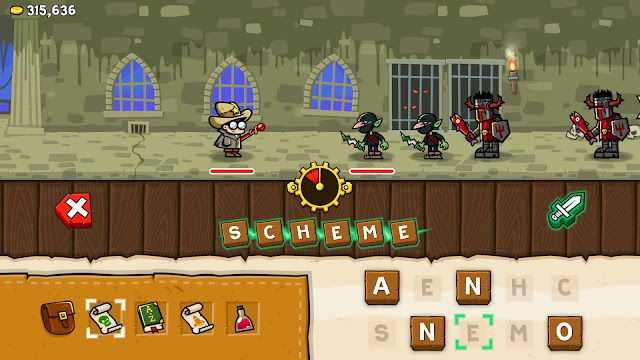 If I feel my equipment is up to snuff and I’ve mostly caught up, I realise (far too late) I should have checked my equipment type. There are different types of monsters — all can be found listed in the shop under encyclopedia, which seems like a strange spot for that to go — and each one has different strengths and weaknesses. Some will fall quickly to fire but won’t react to poison, whereas some strike slowly but may have very few (if any) elemental weak spots. Each level will house a variety of these monsters, and if a level is replayed

So I’ve spent this much time raving about the game, yet I said towards the beginning that Spellspire cannot stand out in an oversaturated market. I absolutely mean that. It’s good. It combines RPGs with word games like Puzzle & Dragons or You Must Build A Boat did with RPGs and match-three games. I think the problem is actually that now that I’ve experienced most of it, I feel done. There’s no urgent need to go back. I feel satisfied not knowing that’s at the top of the tower. And if a game that is supposed to be RPG-like in any way can’t make me care about the ending, it’s a failure in that regard.

And the button choices. It sounds so petty now, but whenever I play the game I would get really upset. I’m used to circle meaning “go back,” or functioning as a backspace. But for some odd reason, circle is used to repeat the last word played (which is a great function when speed is a factor, just misplaced) whereas square is used to delete one letter at a time. Seriously, if those were flipped my world would be rocked. But I don’t want to leave you with that only gross taste in your mouth about the game. Spellspire is good enough to play for a few hours, good enough to talk about a bit, good enough to praise for the developers’ understanding of game progression… but also easy enough to forget about in a week or two when something new and shiny comes along.