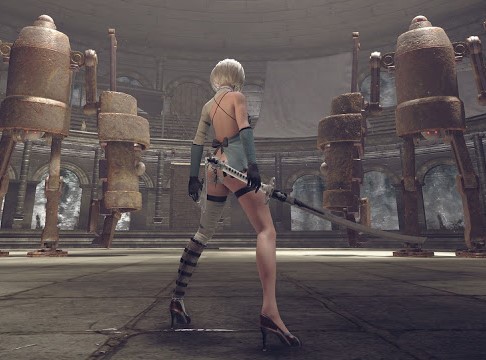 To read the official product description of NieR: Automata’s first major DLC, you might expect a fairly straightforward arena mode and a few unlockable costumes. That’s an accurate description, but also a very incomplete one; just as NieR: Automata is so much more than a “fresh take on the action role-playing game (RPG) genre”, 3C3C1D119440927 brings so much more to the game than just colosseums and revealing outfits. In true Yoko Taro style, it’s a deconstruction of the very idea of the arena / horde mode DLC that’s become so popular.

Related reading: Matt’s review of NieR: Automata, the base game (and the greatest game ever made).

Any such critique starts with establishing the thing to be torn apart. To that end, 3C3C1D119440927 adds three colosseums to the game’s world, each with a series of increasingly difficult encounters and its own set of rules. The Gambler’s Colosseum is your standard combat arena: with your chosen YoRHa android, you fight against waves of machines however you see fit. The Trial of Sand has extra rules for each rank, from relatively inconsequential things like “no using your pod” to the far trickier “win without getting hit”. Finally, there’s the Underground Colosseum, where machines fight against other machines, and you partake by way of 9S’ hacking skills.

On the surface, these are three different variations on a common theme: a way of expanding on the “fun” of a game’s combat system. But even as it gives you this fun toy to play with, 3C3C1D119440927 constantly asks you to question just what it is that makes it fun, and what the point of all this aimless violence really is. 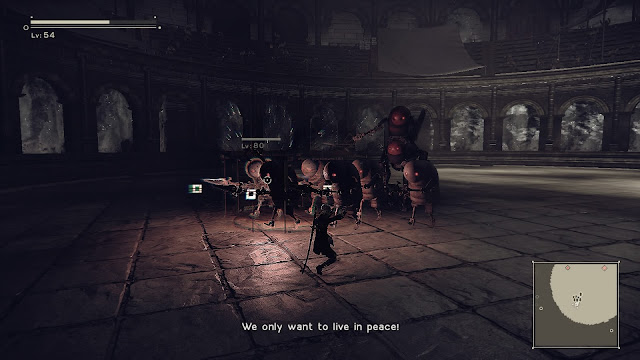 The Gambler’s Arena is particularly blunt in its commentary. It’s set up by members of the Resistance as a way to “blow of steam” when they’re off-duty. “Blowing off steam” here means enslaving machines and forcing them to participate in fights they have little chance of actually winning, and then tossing them aside when they inevitably fail. In between encounters, short cutscenes show Resistance androids berating machines that are visibly terrified and begging for their lives. When you wander the halls of the arena, you see machines crammed into jail cells. Yet you keep playing through each rank, fighting and killing machine after machine, for the sake of “fun” and capital-C Content.

Jump ahead to the Underground Colosseum, and you see a very different side of the same the same thing, because now you have to actually use those weak machines and try to win fights. Remember that bit at the start of 9S’s route where you’re controlling the little machine, and you have to carry the bucket without falling over? Imagine that, but now you’re in a battle arena fighting hordes of other machines. Going from the agility and combat prowess of a YoRHa unit to the clunkiness of a machine really puts their differences in the spotlight, further highlighting the cruelty of the contest.

At least in the Underground Arena, things are slightly more even – if anything, they’re stacked against you, one little machine against many. That little garbage can machine can only take you so far, and after a couple of ranks, you’ll have to abandon it and use newly-unlocked bipedal or flying units if you want any chance of success. So the weak machine gets cast aside, its usefulness outlived. Meanwhile, you, as 9S, continue having “fun”, using the bodies of these machines for your entertainment and caring naught for their well-being. 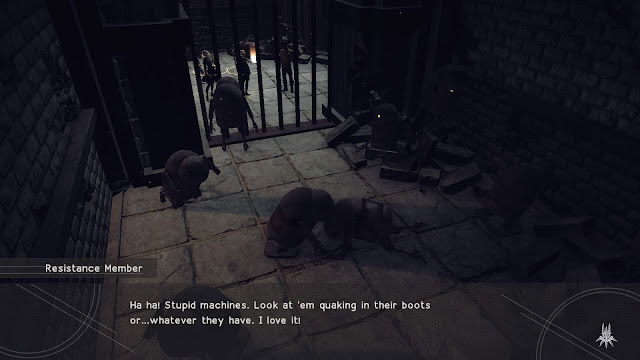 If that’s not clear enough, before each fight, when you’re choosing which machine to use, the machine says “WILL YOU USE MY BODY?”. That is a literal question of course, since you’re being asked to choose which machine to embody for the upcoming fight, but it’s also a rhetorical and moral one: “Will you use my body for your entertainment?”

For their part, the machines in the Underground Arena fight to get stronger. They don’t know why they want to get stronger, and they have nothing to gain from it other than pain and heartbreak, but they continue to fight for this neverending, futile goal. And what is the point of arena modes in games, generally speaking? To get stronger, and to overcome increasingly difficult obstacles for no real reason other than to get strong enough to take on the next challenge – and endless cycle of digital bloodshed in the name of “fun”.

The Trial of Sand is a very different arena, in terms of its narrative context. It’s run by a cult-like group of machines dedicated to following a prescribed set of rules about how life should be lived. These rules are continuously growing (“We hit the 120,000 mark recently”, one machine will tell you), and they’re a cage for the machines as much as a way of giving their lives meaning. All the fighting in this arena is done according to these rules, as a way of both enacting them and understanding them; they fight because the rules say they must, and they fight in strange, creative, challenging ways because that is what’s decreed. 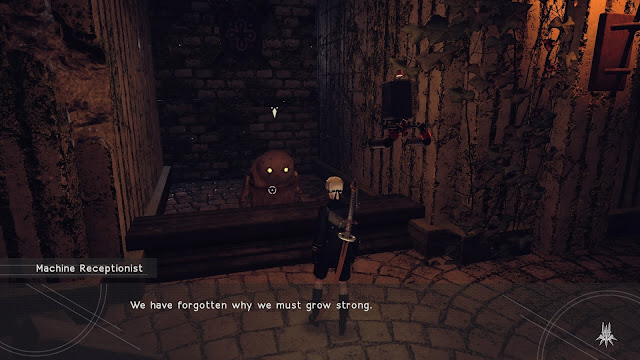 Why do we fight in our games? Because the rules of the game say we must. Why do keeping fighting, ad nauseum, bringing in new sets of rules (in other words, new games) day in and day out to keep things “interesting”? This doesn’t just apply to battle arenas, but to games in general. The “rules” of the culture that’s developed around games say that combat is “fun” and “exciting”, and therefore almost mandatory, yet game designers keep having to find new and interesting ways to keep that combat “fun” and “exciting”.

Even with something as pedestrian and well-canvassed as arena mode DLC, Yoko Taro found a way to do what he does best: question our fundamental understandings of things we tend to just take for granted, and tear at the fabric of the circular logic that holds those things together. Arena modes are the purest form of the idea that combat is the pinnacle of fun in games, so Taro made an arena mode that undermines that very foundation.

The best part, though, is what comes after you’ve finished all three colosseums (and no, I’m not talking about the well-publicised CEO boss fight). The arenas represent maybe three quarters of the DLC, and thought-provoking as they are, they’re not a patch on the final chapter. I’ll leave it at that, because it’s best discovered with as little prior knowledge as possible, but suffice to say that 3C3C1D119440927 is a lot, lot more than just an arena mode with some costumes attached. It’s an insightful look at the very nature of arena modes and games’ general obsession with violence, and the perfect epilogue to the greatest game ever made.