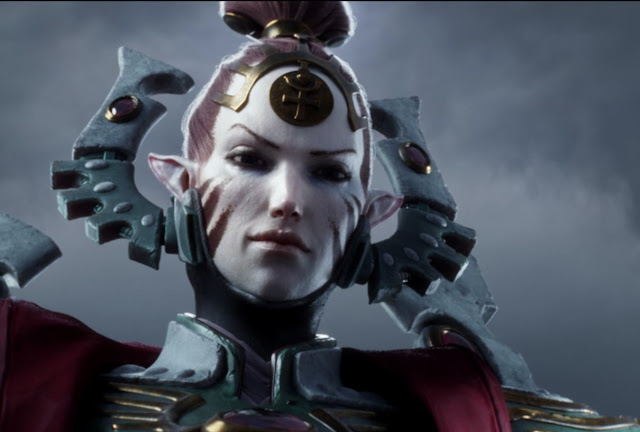 Ask one of your mates about Warhammer and at the very least, you’ll probably get a response that’s a half-hearted “Oh yeah, Space Marines.” It’s rare that you’ll find someone who has absolutely no clue about what the franchise is, and that’s because by some miracle or three, the tabletop skirmish wargame has become an everyman spectre of sorts. It’s had the mainstream treatment of phenomenons like World of Warcraft but it’s somehow ended up without any of the notoriety – it’s been name-dropped in TV shows as a signifier of the Deeply Uncool and conversely, it’s done the rounds as a series of video games of varying genres and equally variable commercial success. Unfortunately, it’s become largely forgotten in the grand scheme of things.

Sure, the guy at your local fish and chips shop will mumble about Space Marines if pressed but the spark of recognition and association that franchises like Warcraft have attained will likely not be there. Everyone’s heard of it but no one seems to really care enough to play it, and as a fan, that bothers me. What makes it so hard for other people to really get Warhammer? It’s been around for years, and it’s already considered a cult classic by some; why isn’t it more popular? For better or for worse, Relic Entertainment’s latest addition to the franchise’s extended universe answers that question for me. Warhammer 40K: Dawn of War III is as unfriendly as it is bloodthirsty, and man, it is really bloodthirsty.

At its very core, Dawn of War III is a wargame. That might sound like a useless statement because its very name invokes the concept of war, but it’s an important distinction to make when you’re considering where this game falls on the sliding scale of RTS titles. For example, Starcraft 2 is an excellent example of an RTS that has similar themes and ideas, but not many (if any) would call it a wargame. What sets Dawn of War apart from others in the genre is its approach to squad-based combat aka the reason why it is not only quantitatively but also qualitatively a game about war. Starcraft 2’s approach to narrative and combat delivered tight, isolated skirmishes taking place during a war whose consequences were only really felt through cutscenes. In Dawn of War III, every bloody battle feels like you’re waging war. Everything is conducted on a bigger scale in this game, from the bombastic elite units to the sheer quantity of units on the field that you use to rip and tear your way to victory. Instead of focusing on micromanaging things like resources and base-building, the two cornerstones of the RTS formula, you’re encouraged to focus on controlling unit strategies in the heat of the battle. There’s not really any time to worry about whether you need additional pylons. 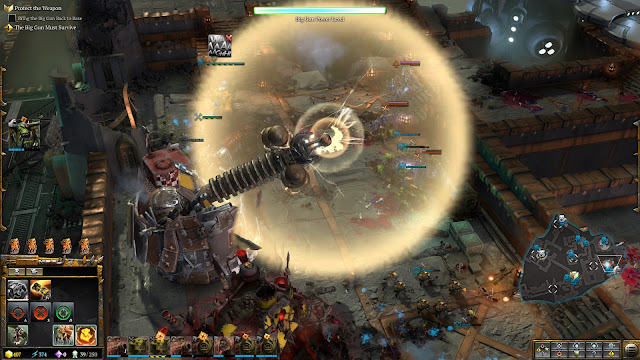 This difference in scale and execution may be the most off-putting for those considering the game as an introduction to the wider Warhammer 40K franchise. It looks and smells like a traditional RTS, but the layers that make it a Dawn of War game – the canon of near-operatic proportions and the oft-unexplained distinct strengths and weaknesses of each race – have to be peeled back with some effort. For example, the singleplayer campaign shunts players from faction to faction with each mission, ostensibly in an attempt to familiarise newbies to how all the different units and commanders fare.

Unfortunately, this seems to have the opposite effect; it’s hard enough to learn the ins and outs of one faction in the time that it takes to complete one campaign mission, and to be forced to change factions every mission just doesn’t give you enough time to have the satisfaction of mastering one type of army, let alone to figure out which one you actually like. The fact that each army is so distinct likely adds to the difficulty in learning them – the mechanical handling of each is so different because of their themed skills that getting a grip on the reins for your Eldar army won’t mean a thing when you’re fighting as the indomitable Orks. The tutorials will do a good job of pointing you at your enemy and shoving your soldiers in their direction, but to add to the confusion, very little is actually explained about the strengths and weaknesses of each unit. Considering that the management of the units and their various strategies are already complex enough on their own, someone with no knowledge at all of the Warhammer 40K universe is likely to flounder in this environment.

More importantly, there’s the flow of combat to consider. Is this a game about fighting that gets too bogged down in the details because of its difficulty curve? In short, not really. The feel of tension in the battles is organically built, and the franchise’s stylised grimdark aesthetic really shines through. When Dawn of War III gets it right, it really gets it right. Units charge and fall spectacularly on the battlefield, injured units attack and react slower (lending an extra tactical dimension when it comes to weighing up offensive vs defensive approaches on the fly), and the combat archetypes are well-balanced across the board. A true standout in this title are the Elites – heroic units unique to each faction that bring an arsenal of deadly abilities and narrative flavour to the battlefield. They feel elite, in every sense of the word. There’s lumbering behemoths that excel in absorbing ridiculous amounts of damage, supports that work best behind the scenes depriving the enemy and buffing your troops, and damage dealers that rain unbelievable destruction down from the sky. The way that each unit handles matches how they look and how they’ve been positioned in the narrative – the Dawn of War games have always been thematically strong, and this title is a prime example of that successful formula. 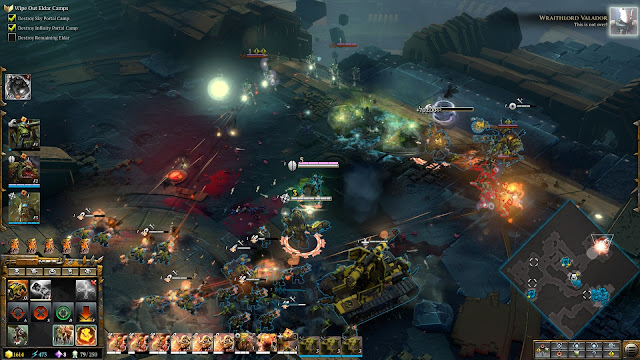 However, with the good always comes a little bit of the ‘meh’. The multi-stage missions are enthralling in their own right, and being involved in the ground-up when it comes to clearing out a potential base location for your forces all the way through to waging war from fortified strongholds has its charm. Where the multi-stage aspect falters, however, is when you have the misfortune of falling in battle towards the end of a mission arc. Because Dawn of War III lacks checkpoints to accompany the transition between different stages of the same map, there is the omnipresent threat that you’ll have to start again from the beginning even if you die towards the end of a mission’s last stages. Take it from me – be prepared to compulsively save your progress during battle, lest one blunder costs you half an hour or more of base-building. Another thing that nagged at me during the late-game was resource acquisition; the success of it fluctuates based on the number of troops you have and the points that you’ve captured, so having a large and successful army ends up slowing resource-gathering to a crawl. This might sound like a problem that’s common to many RTS games, but because of the frenetic pace of combat that’s otherwise established for 70% of your playtime, waiting for anything in Dawn of War III can often feel like an insurmountable and deadly chore. For something that is so key to the combat mechanics, it’s a bit puzzling and disappointing that the management aspects of this game lack the fluidity needed to not detract from the overall combat experience.

There’s a lot to love about Warhammer 40K: Dawn of War III, especially if you consider yourself an RTS veteran and a fan of the franchise. If you’re neither of those things, then you’re probably going to find yourself very overwhelmed. While the game’s narrative is true to the universe it’s set in and compelling in its own way, it’s not quite enough to carry the entire experience and offset the negatives that new players will have to suffer through. Even as a diehard lover of the fantasy sci-fi schtick that Warhammer 40K is peddling, I found the ‘magical item is prophesised to destroy the world so we have to all kill each over it’ storyline a little hard to look at uncritically. It’s a well-executed and on-brand iteration, but it can’t quite make up for the removal of the more detailed combat system aspects that made Dawn of War II great by switching its focus to big-picture army mechanics. Dawn of War III feels like a little bit of every other game that the franchise has churned out so far, but whether or not it will stand the test of time is uncertain; I’m already having trouble pinpointing anything particularly memorable about the campaign that doesn’t involve particular factions having really cool units. Being a fan, I probably hold this game a little closer to my heart than others will. Perhaps those keeping it at arm’s-length will be far enough away to not notice the imperfections.