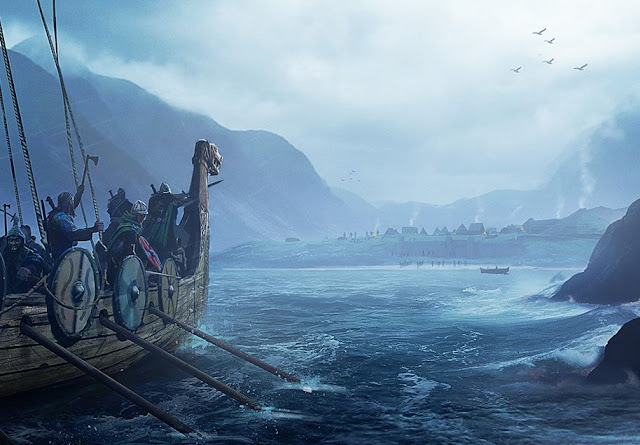 Expeditions: Viking is the latest historical RPG from Logic Artists, a Danish developer whose last offering was all about forcefully bringing the military might of Spain to faraway lands like Mexico. As the name suggests, this is a distinctly Norse-flavoured reimagining of the same sort of formula – conquer, collect comrades, profit. While Expeditions: Conquistador was the sort of feel-good, Kickstarted indie success story that everyone loves, the budget for Viking benefited from an injection of money from the Danish Film Institute, and the result is a more polished approach to its pillaging simulator of a sibling.

In a stylistic comparison to games like Divinity: Original Sin and Tyranny, Expeditions: Viking lies somewhere on the moral decision-making spectrum between the two. You may not be playing as the pawn of a ruthless dictator whose job is to subjugate everything that breathes, but you’re basically going to be up to your neck in choices that don’t lie on the Bioware scale of binary morality. I like to think of it as a good attempt at historical accuracy; anyone who’s ever heard of vikings will likely have heard about their penchant for mead and murder, as well as their unique approach to diplomatic relations. You start the game as the son (or daughter) of a thegn who has just passed away after an unfortunate military excursion to the British Isles. Everyone seems to remember your father as an all-around great guy, and your first quest is to make sure that his funeral celebrations don’t get cocked up.

Trying to make sure that your father’s shieldbrothers get along sounds pretty simple at first. You walk around, talk to some visiting dignitaries, and surprise! You slowly start to learn that a lot of people thought that your father was a bit of a prick. The praise for his exploits starts to ring hollow, and perhaps it damn well should when each fond memory of his exploits is the result of him abandoning his people to fight overseas. With each self-proclaimed friend of the family that you approach, you get a little more uncertain about whether everyone’s going to make it out of the funeral feast alive. You suddenly notice the small things: everyone’s armed, some of your father’s old friends are a little shifty-eyed, and there’s the conspicuous absence of the village rabble-rouser. You realise that the background music is muted and muffled, as if you’re hearing it through a wall, which you think is incredibly strange. 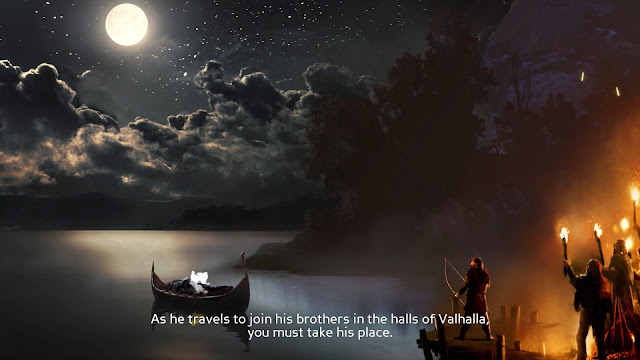 Undeterred, you sit down for the feast and say some good words about your dead dad, but before you get too comfortable, you’re beset upon by a family hellbent on challenging your claim to the seat of the thegn. They’re raving, your mate gets knocked out in a drunken fistfight, and everyone’s clamouring for you to not take this insult lying down. Whatever music was playing earlier is now racketing on at a frenetic pace, and as you steel yourself to brave the cold night and the steel of those who will challenge you, dread starts to settle in your stomach. Those loyal to your house spit vitriol and offer to fight for you, but your hard-eyed mother whispers urgently that if you show weakness, you’re as good as dead. This is the sort of scene-setting that Expeditions: Viking gleefully excels at.

There’s an incredible sense of urgency in the game which likely arises partly from the fact that you’re literally thrown into feudal conflict within mere minutes, and partly from the use of environmental storytelling. The scene of events I described above is merely one way the funeral from hell could have gone – I made three different characters with different passive characteristics and chose various dialogue outcomes to see if there would be any difference, and I was incredibly satisfied when there were. Almost every little word, no matter how inconsequential, has some sort of effect. I don’t mean that every sentence has some sort of significant narrative impact, but the attention to detail in Expeditions: Viking is refreshing because of how your decisions are used to inform the reaction of the game world to the player’s character. Every interaction feels like it has momentum once you realise that grudges run deep and fester for years in this world, and even abstaining from choice is a statement in itself that someone could misinterpret. Your choices feel weighty, as they should; you’re not playing an adventurer stuck in the wrong place at the wrong time, you’re a damn thane.

Your blasé attitude to warfare in one encounter might mean that the town gossipmonger tells everyone you’re lily-livered; you’ll only find out about this the next village over when a farmer says that they’ve heard about how you have no stomach for fighting. A scout in your party will observe a fallen deer in the woods, and an irritated party member may warn later that jibber-jabber may push you all closer to a similar fate. Choosing to free those forced into thralldom will mean that your more conservative friends become Disgruntled, and in this game, moods carry their own status effects so it’s in your best interest to maintain harmony. The way that NPCs interact with you and their surroundings depending on a variety of factors calculated behind the scenes (similar to competing dice rolls in Dungeons & Dragons when interactions depend on stat checks) makes for a very organic storytelling experience. No result is truly guaranteed, and frustration makes for an excellent motivator as NPCs will question you, challenge you, and make their own plans. 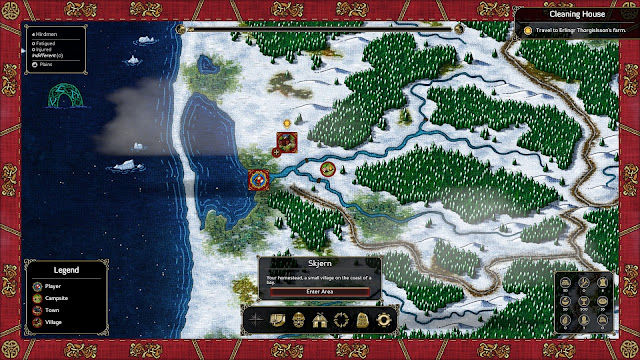 The game makes the most of its narrative approach by frequently milking as much choice out of you as possible. Sure, it can throw a lot of busywork at you, but a lot of it is optional. In fact, I enjoyed it more when I wasn’t treating it like the sort of game that needs every sidequest conquered in order to be fulfilling. So what if a merchant asks me to clear his home of rats? I’m a thegn, and I can imperiously tell others where to shove it if I want to. However, when I did choose to go on a spree of grievously wounding those who offend me, the combat was more than satisfying enough for me to reel me in.

Grid-based tactical fighting is what Expeditions: Viking is selling, and it’s hard to get that sort of stuff wrong. The approach is turn-based, which is predictable, but it’s the sort of formula that works – a fight is less about the power of one’s weapons and more about careful planning. Characters can generally spec into whatever skills they like, but each has a clear preferred set that you ascertain from existing talents. Enemies will hit hard, and they will be surprisingly proficient at not doing stupid things. The terrain is almost like a secondary opponent to contend with; one tile too far and you’ll end up tangled in bramble, slipping on some ice, or prone on the receiving end of a hunter’s net. While the mechanics themselves aren’t novel, those more comfortable with strategy games will have a much easier time juggling the veritable minefield of possible outcomes that need to be considered if you want to obtain victory without a head fracture.

For all the beauty and the brains behind Expeditions: Viking, the one gripe of mine that chips away at its score is the bugginess. The game crashed frequently, most often during the already-protracted loading screen episodes that happened every time there was a map change. Standing in the same spot in a forest would trigger repeats of the same dialogue, but the NPCs would be on different stages in their vocal loops, which would result in them talking over each other at a rapid pace. Sizeable patches were rolled out during my play experience, but even the Steam release patch didn’t manage to stamp out all the issues that reared their little heads after long fights or exploration-intensive maps. I wasn’t inconvenienced to the point that I found the game unplayable, mainly because I was lucky enough to not have the game crash during some the nail-biting fights that I’d have hated to replay again because of the RNG that factors into the many encounters, but it was definitely noticeable and it was a dampener on the experience overall. 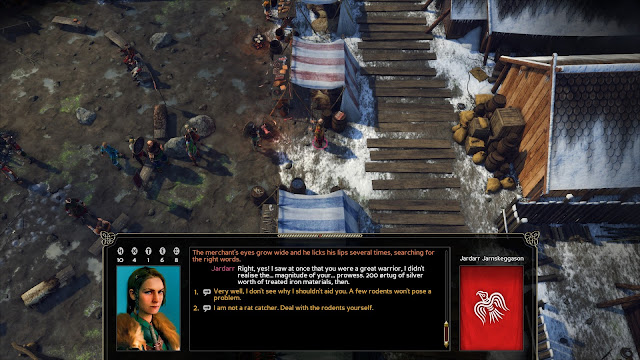 I’d recommend this game to anyone with a passing interest in tactical RPGs, and anyone who looked at Torment: Tides of Numenera and went, “this is bloody amazing.” Expeditions: Viking doesn’t make it feel good to be bad, but it doesn’t have to. It proves that being responsible is hardly the dullard’s choice when it comes to honouring Odin, and after all, history won’t remember you at all if you don’t live long enough to win.

On bringing Lost Dimension – and other niche JRPGs – to PC

A look at the Nintendo Switch’s launch; where it came from, and what comes next