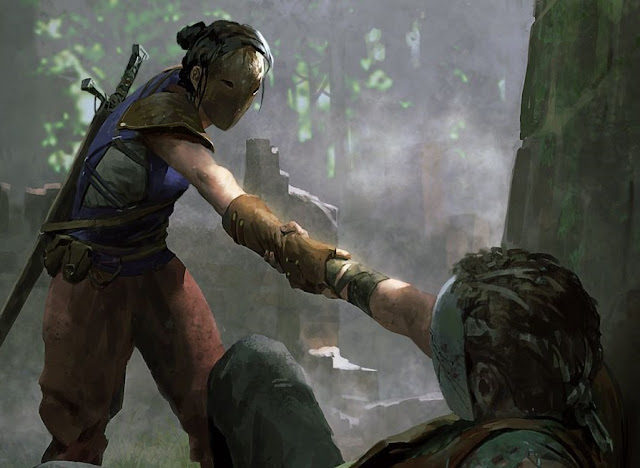 Paris-based indie outfit, Sloclap, and publisher, Devolver Digital, have announced the formal release date for Absolver. Billed as an ‘online melee action game’, it will release on PlayStation 4 and PC on August 29th. The devs also tossed a brand-new combat overview trailer our way, showcasing the details and nuance of fights with detailed voiceover analysis; see below:

According to the press material, Absolver puts players behind the mask of a Prospect, who has taken a sacred vow and chosen to join the Absolvers, an elite corps of combatants fighting to maintain stability in the world of Adal. Players will travel through the forsaken lands, monitored by the Guides, and their encounters with other Prospects online will teach them their place in this world so they can advance to become Absolvers. Encounters with both Absolvers and Prospects will have lasting consequences as you make friends or enemies and find mentors or disciples.

Prospects will choose a combat style, each with their own special abilities, and assemble their own custom Combat Deck to create a personal fighting system in intense, fluid, real-time combat. Absolver’s new trailer dives deep into these details, giving players a good look at each unique fighting method. At the beginning of their journey, players choose one of three combat styles, but others are waiting to be discovered in the world of Adal. The three introductory styles are the Kahlt Method (absorb hits without being stunned or pushed back), Forsaken (balanced and powerful, prospects can parry enemy attacks and briefly stun opponents) and Windfall (increased dexterity grants higher avoidance, leaving enemies open to powerful counter attacks).

This is one of the games that DDNet contributor, Lachlan, was able to get some quality time with at a recent game show in Sydney, and came away from the experience very impressed indeed. You can read his thoughts about the game here.

Beyond those impressions, what struck us in particular regarding the visual component is the combination of high realism, conveyed in particular through the intensely natural and realistic looking movements, with an abstracted, painterly art style – surely an unusual and interesting choice for a fighting game. We look forward to taking on the role of Prospect and learning more about the secret life of Absolvers in a few short months.