It’s the 30th anniversary of both the Dragon Quest and Final Fantasy series, so Square Enix rummaged through its extensive IP reservoir and decided that a fine vehicle for the celebrations would be a board game about how to make a lot of money via real estate and finance. If that sounds familiar in a Monopoly kind of way, then you recognised the 2011 Wii title Fortune Street (also known as Boom Street in Europe and Australia), featuring characters from the Dragon Quest and Mario series. It was the first and only game (so far) in the series to be published outside Japan, where the franchise has been going strong since 1991. Itadaki Street was originally created by Dragon Quest designer Yuji Horii.

The game will offer multiplayer for up to four. A unique feature of the 30th anniversary edition is being able to use Itadaki Coins to unlock famous scenes from the Dragon Quest and Final Fantasy series. Itadaki Street: Dragon Quest & Final Fantasy 30th Anniversary will launch in Japan this year for the PlayStation 4 and PS Vita. So far, there is no word on a localisation.

Still no plans for a Western release, but importers can get Dragon Quest XI in July

If you’re like me and love Dragon Quest too much to wait around for confirmation of a global release, you’ll be pleased to know that Dragon Quest XI has a Japanese release date: July 29. I was expecting September or October at the earliest, so this date comes as a very nice surprise. Keep in mind that this applies only to the PlayStation 4 and 3DS versions of the game; a Switch version is still planned, but it doesn’t yet have a release date. 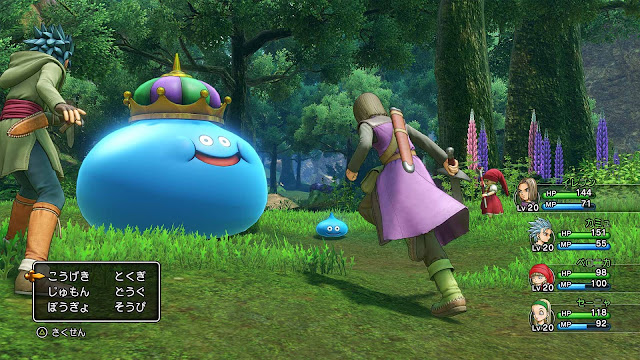 For those who decide to buy both versions, Square Enix have figured out a creative solution that’ll let you share some amount of progress across platforms, even between Sony and Nintendo. You can create a “Spell of Restoration” (presumably at save points), which saves the general state of the game so that it can be reproduced on the other platform. Not all details will be transferred, like character names, but it will at least offer some option for people to retain progress across two unconnected systems.

Pre-orders of either version of Dragon Quest XI come with two bonus in-game items: the Vest of Happiness, which increases EXP earned from battle, and the Upstart Vest, which increases gold received. Square Enix also revealed a “Dragon Quest XI Double Pack Hero’s Sword Box”, which includes both the PS4 and 3DS versions in special packaging. It’ll be sold exclusively through the Square Enix e-store and Lawson HMV stores for 16,157 yen; sadly, neither of these stores will ship the Double Pack overseas.

The developers behind Senran Kagura have worked out what people want to use the Nintendo Switch’s HD rumble for!

Yesterday’s Nintendo Direct brought us information on a whole bunch of games to look forward to. One that you won’t see too much written about is the announcement that the team behind Senran Kagura are busily working on a game in that series for the Nintendo Switch.

You won’t hear so much about that one because it was only shown off on the Japanese Direct, and it’s pretty easy to guess why when you look at the video below. Basically, the game infamous for its all-female cast having giant boobs is working hard at… creative… implementations of the Nintendo Switch’s HD rumble, which, we’re told, is remarkably good at recreating the sensation of… uh… feeling things wobble.

And I mean, sure the fellow in the video is there talking about being able to grab the girl’s hand and feel her emotions and feelings through the HD rumble, but let’s all be quite transparent about this: people playing Senran Kagura won’t be looking to hold hands. I wouldn’t get my hopes up too much for this one being localised; I’m sure the developers would be up for it, but I’m not so sure the censors would agree that it will all be in the spirit of harmless fun.

Take a deep breath, because the infamous company has released extensive details for the upcoming 4.0 Stormblood update to the MMORPG Final Fantasy XIV. To think, when it launched critics and fans alike turned their noses up at the game… and now it has a massive following, consistent updates (the last major one being Heavensward), and more — despite it being six years after launch. Oh, and more importantly, there will be bikinis. That’s reason to pause for applause, so I’ll wait for you politely to complete a rousing round. 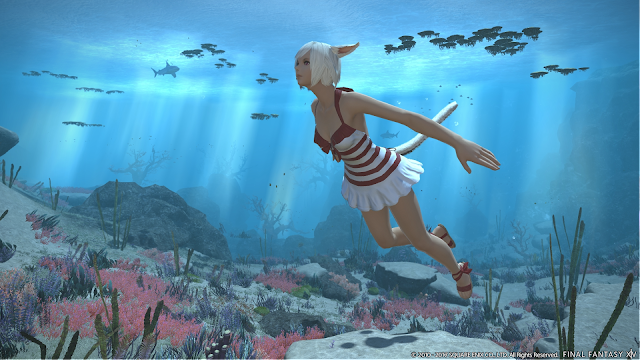 Done? Good. Down to the nitty-gritty. The Warrior of Light will be traveling to new locales in Aldenard, to the Far East where the lands are populated with primal tribes. Ala Mhigo is a city-state located in a mountainous region in — you guessed it! — the far east of Aldernard. Two decades prior to the Warrior of Light’s arrival, many rose up to take on a mad king; unfortunately, the Garlean Empire was actually controlling the situation and they swooped in, still in control to this day. They no longer control Gyr Abania though; this strict, religious area lost their temples to the occupation. There is also Doma, the lands that birthed ninjas and samurais, which lays on the eastern banks of Othard. It was invaded twenty-five years ago by the Empire and has struggled to regain control — they pushed so hard, in fact, that their failure resulted in the stripping of their fundamental freedoms. In Doma you will also find Azim Steppe (vast grasslands divided into fifty territorial tribes), Yanxia (where the One River flowls and grueling physical labour is the only way of life), and the Ruby Sea.

In addition to new locations, there is a new adventure mode, new jobs, swimming, and more to be added to FFXIV. Two new “guest creators” have been brought on board to create challenges, with a new Eight-man raid adventure on the horizon: Interdimensional Rift-Omega. It’s as science-fiction-y as it sounds, we promise. For jobs, players can now become samurais or red mages. Swimming and diving means pillaging and bikinis — we’re blushing over here! There is a new residential district names Shirogane, with architecture steeped in the heritage of the Far East. Finally, there is an increased level cap (up from 60 to 70) and increased furnishing limits (it will double per home type, so we will all be hoarders soon enough).