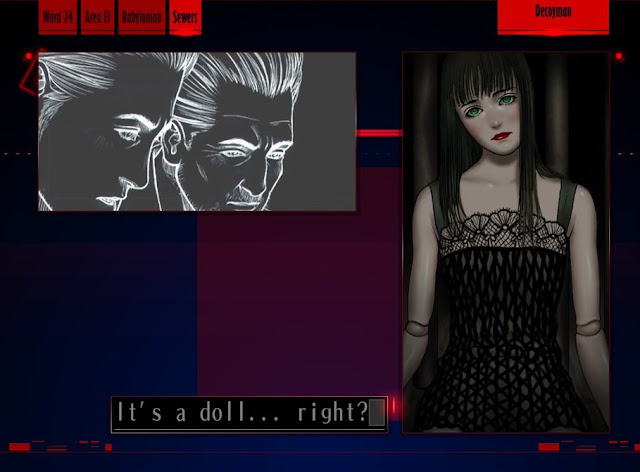 “Noir” is not just a great word; it’s a great genre. Presenting us with worlds of shadow, where the dark swallows the light, and where the good guys are not as heroic as they should be, and the bad guys represent the cancers that are slowly eating society, Noir is a genre of unrelenting moral conflict, endings that don’t leave you feeling good, and sharp, bleak humour. It’s a world of gorgeous femme fatales, private detectives, organised crime, hard drinking, chain smoking, and, of course, those iconic venetian blinds.

Related reading: For a second opinion, check out Nick’s review of the game when it was released on PC last year.

Noir is a genre that Raymond Chandler made his own, that Humphrey Bogart and Lauren Bacall then brought to the big screen in a big way, and then it all faded away. Occasional dalliance in films like Chinatown and, later, Se7en, aside, the world grew past Noir, generally preferring a cut-and-dry morality, women that didn’t weaponise their sexuality, and endings that left us much more comfortable with the outcomes. We’ve got the old example of Noir that both subverts the rules while respecting the form, such as the excellent Jessica Jones TV series, but it’s not a genre that anyone would accuse of being mainstream now.

So of course Goichi Suda would decide to make his first project upon forming Grasshopper Manufacture a Noir thriller visual novel. Suda, who has long been referencing back to generally “dead” genres, such as grindhouse in Shadows of the Damned, and exploitation film in Lollipop Chainsaw, has a love affair with vintage art styles, and in so many ways The Silver Case is a masterpiece in that same vein, and a game that one feels Raymond Chandler himself would have wholeheartedly recommended. It has taken a very long time for anyone to even think of localising this game into English, but primitive graphics aside, it still feels as modern and worthy as any other visual novel out there.

Noir is a genre that’s all about hitting audiences hard. Like a master boxer, the genre aims to patter you with sharp, fast punches before walloping you for the knockout with an almighty swing. Noir is a genre in which the characters talk fast and sharp, and the dialogue and narrative will generally progress at the same scattershot pacing as the inevitable gunshots do.

The Silver Case is, in basic terms, a murder mystery, as police do their thing and try and solve some particularly nasty murders in a particularly dank and miserable city. But that simple description also describes so many other detective stories, and doesn’t really explain the extent of The Silver Case. This game is, in some ways, similar to one of the more famous recent examples of the Noir genre: L.A. Confidential. Not the film (though it’s a fine film indeed), but rather the novel that it’s based on, by James Ellroy. That novel was written like the newspaper stories of the early century; short and sharp, with minimalist sentence structure in order to produce a reading aesthetic that was clean and without embellishment, allowing the audience to quickly digest what’s going on before moving to the next story. It’s an approach that works for Noir, as it helps establish that rat-a-tat pacing that the genre uses so effectively to spar with its audience.

The Silver Case adopts a similar spartan approach to storytelling as L.A. Confidential. It’s a visual novel that covers a lot of ground by keeping embellishments to a minimum, emphasising the key moments with vivid, often shocking, imagery. The mastery of the storytelling lies in that, despite the minimalist approach to the text, the characterisation is superb, and each and every character has their own distinct personality. You won’t like all of them; this is a noir tale, after all, but you’ll be left with no sense that any of the game’s characters are dry. 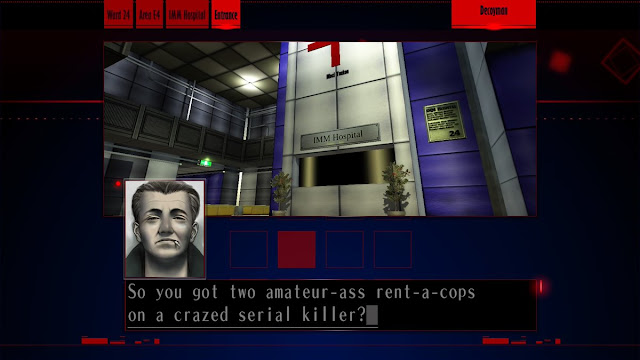 At the same time, Goichi Suda seems to have been influenced by the writings of William S. Burroughs, and particularly The Naked Lunch. I can’t say for certain if Suda has read Burroughs at some stage and then deliberately appropriated his style, but there are definitely elements of the game that reach the same kind of feverish storytelling of that masterpiece, particularly if you take into account the David Cronenberg film. There’s a similar sense of dissonance in the movement of the narrative, with conversations jumping around the place, and a very fluid understanding of time. The Silver Case is a linear story, for the most part, but the gaps between events are rarely defined, both in the moment-to-moment, as well as the overall structure of the storytelling. It’s very easy to be confused by those jumps, but at the same time there’s something so beautifully efficient about The Silver Case for people who are paying attention.

Accompanying this storytelling is a delightful tap-tap-tap sound as dialogue is spoken, as though the story is being typed out on a keyboard as the player reads along. This helps reinforce that “newsy” style of storytelling a-la L.A. Confidential, and subtly reinforces the seedy underbelly theme, as we so often see the journalists in Noir stories being drawn into this underworld, to their ultimate demise (moral or physical). In many ways The Silver Case’s one and only flaw is that it relies so heavily on being a homage to a largely dead genre, that many players will not quite understand what’s in front of them. It’s hard enough getting people on board with visual novels when they’re in comfortably familiar genres. This one’s going to lose a lot of people in the density of its heritage, I feel.

It doesn’t help that what little interactivity is in The Silver Case is unwieldy beyond measure. At various points you’ll be able to lead your character through small, enclosed areas, looking for the trigger to the next narrative sequence. I’m not sure that these sections weren’t thrown in simply to force the player to do something, but regardless of the intent, the interface to navigate around the space is unnecessarily clunky, and while there’s no pressure on moving around quickly, I found myself constantly wasting time wrestling with the most basic of commands to get my character to move and interact with stuff; this was an unpleasant dissonance with the rapid-fire storytelling experience. 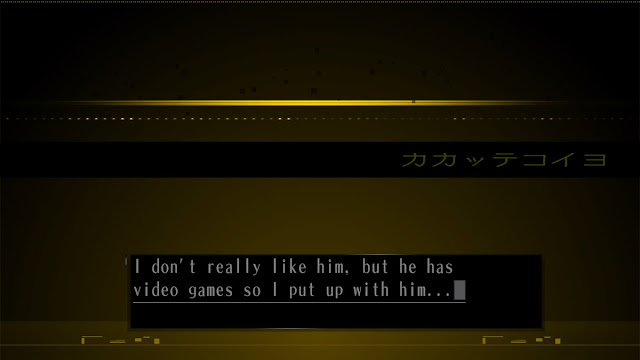 Related reading: And for a very different, but utterly mesmerising, visual novel experience, be sure to check out Danganronpa 1 & 2. Now on PS4! Matt’s full review.

Still, I got over my issues with the “gameplay,” and it was worth doing so, because Goichi Suda’s love letter to Noir is so striking and vivid that it’s a game I’ll not soon forget. By turns shocking, darkly humorous, confounding, and always creative, this was Suda-san’s first game as an independent game developer, and through it we see so much of what would become Suda’s trademarks; that same transgressive attitude, the same love for classical film and literature genres, and that same intensity in his storytelling (that will ultimately get overlooked by most critics). There’s even a reference to Bizarre Love Triangle in there, and any game maker who can get references to New Order into their games gets ten thumbs up from me.

Omega Quintet is coming to PC, courtesy of Ghostlight!