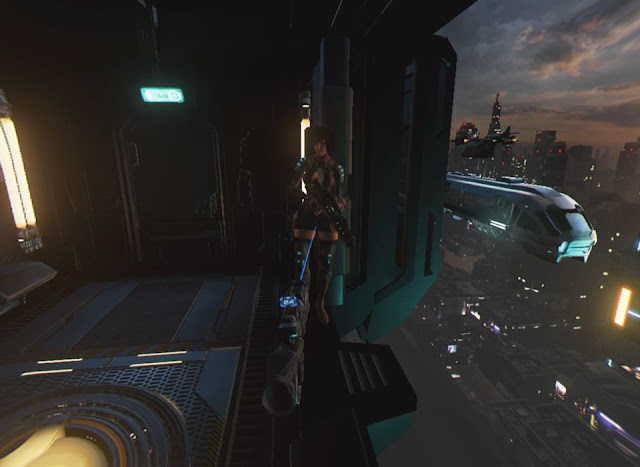 I don’t get as much time to play PlayStation VR as I would like to at the moment. I love the hardware, but it’s a little hard to throw the headset on when Persona 5, NieR: Automata, and other games have been keeping me so busy without VR support (please, can we have a VR game with Ann, Sega).

But that’s not to say there haven’t been plenty of VR games released in recent weeks and months, so I figured that I’d collect together all the games I’ve played for some short & sweet reviews. Some of these games have been around for quite a while now, so it didn’t make sense to do full reviews of them, but I do hope that you’ll check them out if you haven’t already:

Mortal Blitz is such B-grade trash, but I love every second of it. And trashy presentation aside, the game is actually a solid example of how VR can make a pedestrian genre really enjoyable; in this case, take the rails shooter and use the VR to create a more dynamic and exciting experience.

I actually can’t remember much of the plot, other than the fact that one of the characters is a woman with the most incredible legs we’ve seen in VR to date (well, aside from Hatsune Miku, of course). Point is, though, that you’re a soldier person, and you need to go on a range of missions that involve shooting everything from people to really ugly alien things.

The gameplay doesn’t do too much beyond what we’ve seen in lightgun games in the past – though being able to physically duck your head behind boxes and the like to get out of the firing range is a really nice touch. What’s most important is that the game works without giving me the slightest bit of motion sickness, and as a fan of trash B-grade science fiction, I was really able to appreciate the inherent silliness of it all. There might not be much depth here over the long term, but for some short bursts of frenetic action, it absolutely has the lightgun genre nailed.

The idea of looking down on a horde of soldiers and directing them around a battlefield is an appealing one. People have been doing it with toy soldiers and tabletop wargames for decades, and with VR we have the opportunity to recreate that experience in its entirety.

Korix is the first attempt at doing a proper strategy game on PlayStation VR. Unfortunately, it’s not a very good attempt by which I mean it’s mildly diverting but ultimately quite a shallow experience. It’s very abstracted, in that you’re directing little polygonal figures around, and while the visual effect is nice enough, the actual strategy within the game is so limited that it’s barely defensible as a strategy game at all.

The idea is to build walls and turrets (of which there is a tiny handful to choose between) to slowly creep your base towards the enemy’s headquarters, while also spawning soldiers (also a tiny selection) that will attack your opponent more directly. But you don’t have any control over those soldiers – they’ll just blindly charge at the enemy. Meanwhile, the enemy’s AI is non-existent; it will spawn slowly strengthening hordes of soldiers, but otherwise it won’t do anything. If you can get a multiplayer game going there’s a bit more strategy involved, I guess, but there isn’t much of a community wrapped around this one, leaving Korix feeling like a game that had a good idea buried away in there, but fails to give people the VR strategy experience that they’ll be looking for.

Virry’s not a game, and I know that in writing that I’ve disqualified it as a potential purchase by many. But Virry is such an important little experience, because it gives people the chance to get close to threatened animals, and hopefully come away caring a little more about conservation.

Not a game, but rather a conservation experience. This is amazing. #PS4share https://t.co/AicaTj58U4 pic.twitter.com/97J2xRgzf0

What Virry really is is a series of micro-documentaries that show you, close up and in VR, a range of different animals as they live in their natural environment. It’s the closest you’ll get to a zebra, let alone a lion, and while that’s going on, a commentator will share some basic facts about the animal and the threats that it’s facing.

Best of all, though, is that the “game” has a partnership with Lewa Wildlife Conservancy in Kenya, and by purchasing Virry, you get a couple of months access to the Conservancy’s 24/7 streaming cameras, which allow you to simply observe the animals in action. So, not only are you doing a good thing in supporting a very important cause in purchasing Virry, but you also get to enjoy the best experience of wild animals you can get short of taking yourself off to Africa for an actual safari.

I give full credit to the developers for what they tried to do with Mervils; give players a full, proper, 3D adventure game. One that mixes light platforming and objective-based challenges, and then do it in VR so people have something substantial to play in between the light gun games, horror experiences, and puzzlers that to date comprise the bulk of VR entertainment.

The problem for Mervils is that none of it works that well. It’s not a game that benefits in any substantial way from being in VR, because you’ll be focused entirely on your avatar, which sits beneath your view and demands your attention at all times; you have no time to actually enjoy the game as a VR experience, and Mervils does nothing with that VR perspective.

The gameplay is filled with little irritations, too. Jumping around is too floaty, and the camera’s a pain to manoeuvre around, as it will remain static until you press a button, meaning that unless you’re constantly refreshing where the camera is, your little Mervil character will wander to a distance that makes him a pain to control. Combat is also painfully clunky, and while the overall personality of the game is bright enough, I found that soon I had no interest in what was going on in the world, because the characters aren’t interesting enough to bother with. Mervils: A VR Adventure relies too heavily on a gimmick it doesn’t even use properly, and that’s the very definition of a limited experience.

The DDNet Debate: On music and soundtracks; what works, what we love, and what we don’t