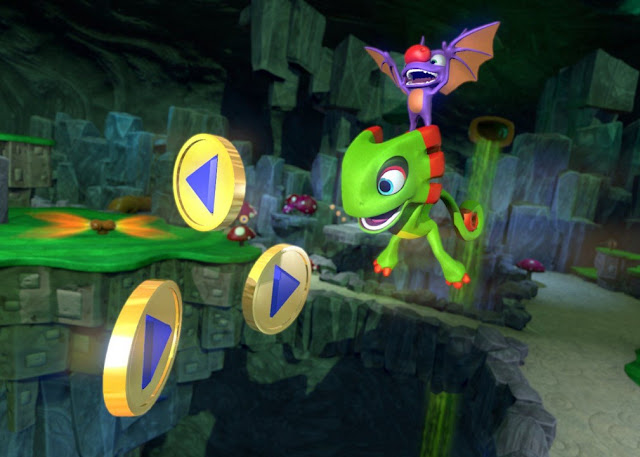 Yooka-Laylee is an old-school 3D platformer in the same vein as Nintendo 64 classics such as Banjo-Kazooie and Donkey Kong 64. Made by Playtonic Games, a team that includes several ex-Rare employees who worked together during the Nintendo 64 days, this is a game that promised an awful lot. With many fans missing the days of those early 3D platformers, Yooka-Laylee’s promise of an “spiritual successor to Banjo-Kazooie” was always going to turn heads. It’s just a pity the game didn’t quite live up to its promise.

Playtonic has definitely offered something that resembles Banjo-Kazooie, but it’s missing a lot of what made Banjo-Kazooie brilliant in the first place. I will go into what I hope is a lot of detail throughout this review, but first I want to mention the fact that I am 33 years old, and grew up on my Super Nintendo and Nintendo 64. This makes me effectively the target audience for Yooka-Laylee. Some of what I will write about will undoubtedly sting to many people who were looking forward to this, but the ultimate truth is that this game fell pretty flat very fast. I will make direct comparisons to Banjo-Kazooie through the review as well, since Yooka-Laylee is a direct attempt to be exactly what made Banjo-Kazooie great. For this purpose, I actually did go back and revisit the original Banjo-Kazooie to be sure that I don’t just have rose-tinted glasses at the time.

Upon booting Yooka-Laylee, I was greeted to a menu screen reminiscent of Banjo-Kazooie, complete with the old font and character heads making sounds when changing a selection in the menu. I thought this was really neat, and it got me very excited. But then I was rather disappointed to find that there was no charming introduction to the characters in the same way that, back in day, Banjo, Kazooie and friends were playing the classic theme song and bickering with each other at the same time. I remember watching that opening sequence in Banjo and really connecting with this bear and bird and all of their friends who argued with each other but clearly loved each other at the same time. When Banjo’s sister was kidnapped by Gruntilda, I felt so bad for Banjo. It wasn’t a complex intro, but it was effective at immediately connecting me with the characters and action. On the other hand, I just simply could not care less about Yooka and Laylee. 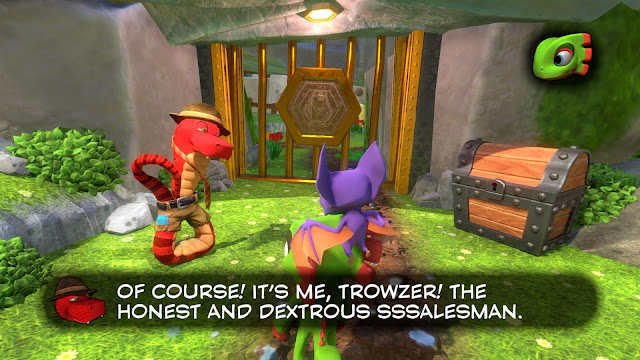 The two main antagonists of Yooka-Laylee, Capital B (a bee) and Dr Quack (a duck head in a jar), are sucking up all the books around the world in order to find a particular book filled with golden pages, as this book allows the owner to basically manipulate time and space itself. Of course, this is pretty serious stuff, but the current owners of the book, Yooka and Laylee, could not have cared less about the book until they lose it. It’s not until they arrive at Capital B’s “Hivory Towers” that the realise the significance of what is going on. And so their adventures begin. Sadly for the game, I had already stopped believing in Yooka and Laylee as meaningful characters by this point, which is a shame, as despite some other glaring issues, Yooka Laylee isn’t actually a terrible game.

Some of the NPCs throughout the game I found a lot more endearing, such as Trowzer the snake (haha), Kartos (a minecart with Kratos inspired facepaint) and of course Shovel Knight, who makes a delightful cameo in the game. Jokes and wise-cracks are made throughout the course of the game and it does have that British style humour that we saw in spades in previous N64 Rare games; the kind of stuff that will go over children’s heads but will make adults chortle. Meeting and assisting many of these NPCs help Yooka and Laylee find the golden pages of their book, called Pagies. Many Pagies are also scattered around the worlds for Yooka and Laylee to find, which brings me to another Banjo-Kazooie comparison; the hunt for stuff. Banjo was after jigsaw pieces; Jiggies. Yooka’s after Pagies. The comparison the developers themselves are encouraging just doesn’t get more blatant than this. When Banjo and Kazooie found a Jiggy, they danced and were so proud of themselves. There isn’t even an animation for Yooka and Laylee when they achieve the same thing; they just walk through the Pagie, it disappears, and is added to the collection like it was any other collectible, and then our heroes continue on like nothing happened. It’s just not charming enough.

Other elements in the game are pretty standard fare, Yooka and Laylee collect quills, of which there are 200 in each world, and exchange them with Trowzer to learn new moves. One thing that I did like is that they allowed both characters in the duo to learn their own moves. A missing opportunity in Banjo-Kazooie back in the day was that 90 per cent of the moves learned were explicitly for Kazooie, with Banjo just doing the running and jumping for the most part. Using a chameleon and a bat as the main characters opens up the opportunity for moves such as Laylee using sonar to find secrets, and Yooka eating things with a long lizard tongue in a similar fashion to Nintendo’s own Yoshi, and in the absence of a narrative context to establish the character’s relationship, the combination of abilities is the closest that the game comes to establishing that the two are, indeed, close friends. 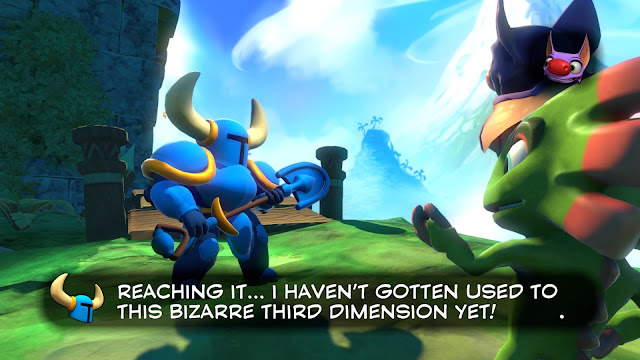 The more Pagies that Yooka and Laylee collect, the more worlds they can open up. There are five worlds in the game, which seems like a limited number, but each world can be expanded in size so that there is more of the world to explore. This does set it apart from Banjo-Kazooie, and is a pretty neat idea overall. Another character, Dr Puzz, is also present in the worlds to transform Yooka into different kinds of objects as well, giving them another way to get around and solve puzzles. The worlds themselves can be somewhat tricky to traverse thanks to a camera that we’re promised will be fixed by the time that you read this review. It’s also possible, however, that the level design itself is partly to blame, as there are moments where it layouts and the like are quite rank.

Despite the promise of a patch, Yooka-Laylee’s camera is so bad that it deserves its own paragraph. I have attempted many objectives, only for the camera to switch on me at crucial moments and have me fall off my platform, resulting in a tedious need to make my way back to where I was previously. Simply walking under a bridge or a section of ceiling causes the camera to fly right up Yooka’s butt, making it impossible to determine any kind of path I should take. Even walking near a wall causes some level of zooming that interferes with anything I want to look at. It’s just utterly terrible. I have to wonder if a patch really is going to fix it, because if the developers insist on leaving the camera so zoomed in, I can see it being a permanent problem, even if the bugs are resolved. It’s a shame that the close-in camera doesn’t work well, however, because the levels look so darn gorgeous, and we’ll lose some of the impact if the camera is pulled back. It’s a nasty case of damned if you do, damned if you don’t.

David Wise and Grant Kirkhope combined to make an incredible soundtrack to Yooka-Laylee. The initial jungle level sounds exactly like something ripped out of Banjo-Kazooie, and immediately helped set the mood that the characteridsation couldn’t. From there, the rest of the tracks give the game its own kind of distinct flavour. I would easily buy the soundtrack in a heartbeat to listen to on a relaxing Sunday afternoon. As I write this, I’ve got the title track stuck in my head and I couldn’t be happier about it. From the relaxing, soothing sounds of Glitterglaze Glacier to the intense beats of the drum during a Kartos minecart mission, the music really does capture the spirit of what Playtonic wanted in Yooka-Laylee. and begs the question, “what if the rest of the game had managed to capture this level of spirit?” 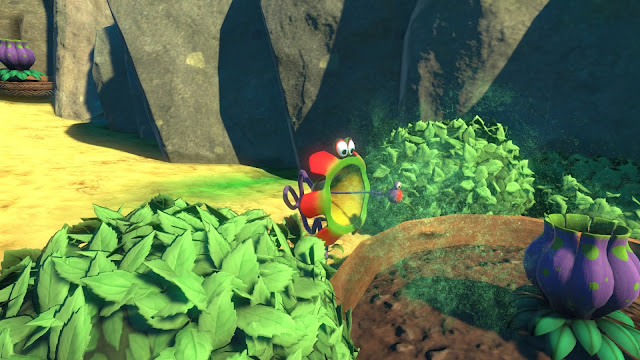 The character’s voices are another highlight in giving the game that sense of nostalgia that it’s hunting for. It’s what you’d expect out of a game like this, with cute little grunts and nonsensical gibberish just like what you would expect from a new Banjo-Kazooie title, and with the upcoming patch, these voices will be even better. The sound effects have also been cribbed from Banjo-Kazooie’s sense of style in order to maintain some level of nostalgia and familiarity. It’s generally quite difficult to actually criticise the presentation of Yooka-Laylee. The developers have a mastery and love for the aesthetics of the 3D platformer from yesteryear, and there’s no denying this raw passion.

Related reading: Another 3D platformer that struggled to live up to its goal of being a retro throwback was Ginger. Read Harvard’s review of that one here.

Yooka-Laylee doesn’t do anything to try and modernise an old-school classic. That’s completely fine in my books, I don’t need maps, checkpoints or level markers in my 3D platformers. I loved what was on offer back on the Nintendo 64, and I’m prepared to love it all over again. It’s crushing that Yooka-Laylee does not reach the heights of brilliance of the game it clearly draws its inspiration from. On its own, it is a decent game that is playable, but we were promised characters as delightful as in Banjo-Kazooie, and gameplay as slick and joyful to back those characters up. The potential was there, and this game has certainly been supported well enough by both Kickstarter and Team-17 that budget shouldn’t have been a concern either. The issue is, simply, that Yooka-Laylee proves that nostalgia is a difficult beast to wrestle with for game developers. All that being said, I do hope that Playtonic stick around though, as there is the clear potential and passion for the studio to grow and produce a true great in the genre.

Review: A Rose in the Twilight (Sony PlayStation Vita)