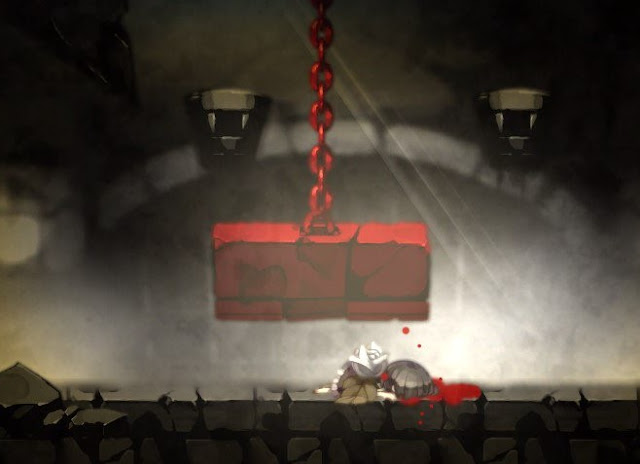 Nippon Ichi has already demonstrated that it has a Grimm-like fascination with taking pure innocence and exposing it to corruption or utter horror. Last year’s Yomawari, and The Firefly Diary from the year before it, were very different games, but the common thread between them was a propensity for inflicting severe violence and horror on little girls.

And now we have A Rose in the Twilight which, to paraphrase the immortal Nigel Tufnel from Spinal Tap, takes the action right up to 11. Whatever you thought about Nippon Ichi’s ability to run innocence through the meat grinder in previous games is nothing compared to what this game does to its little girl. And while its vision of melancholia, its gothic horror setting, and its relentlessly dark aesthetic make the game hard to stomach at times, there’s also something so sublimely beautiful about the game that it’s quite ravishing.

In A Rose in the Twilight you play as a little girl who awakens to find herself in an abandoned, decrepit, haunted castle. She is completely defenceless too, aside from three critical abilities and resources that she’ll need to use to make her way through the deadly halls and figure out what happened to the castle and, indeed, herself. Firstly she has the ability to drain blood from the dead people, and objects that have absorbed their blood, strewn around the castle, and then use that blood to animate various objects around her to clear pathways and defeat enemies. 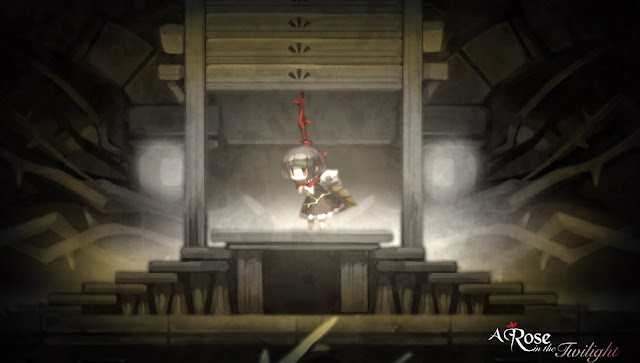 Secondly, she has an indestructible golem ally which can protect and assist her through puzzles. Finally, and most critically, the girl can’t actually die. If she falls too far and is splattered on the ground below, there is always a rose nearby that will resurrect her. If a monster jumps on her and chews her to pieces, she’ll be back. If she gets so stuck that she’s trapped, she can kill herself in order to come back again.

You could just say that this is a contrivance to explain the standard respawn mechanic you find in every puzzle platformer, but in A Rose in the Twilight there’s thematic purpose to it, too. At numerous points the girl will come across a door that has been covered in thorns and can’t be opened. The only way to get the thorns to go away is for the girl to make her way to an execution platform and end herself. Her blood will drip on the thorns, they’ll disappear, and the girl will be resurrected so that she can continue on with her grim journey.

I’ll freely admit that I never quite got over these execution scenes, not least because they’re a deliberate subversion of what we’re usually trying to do in games; that is, to keep our characters away from harm. Here we need to deliberately harm our protagonist, who happens to be incredibly cute, and the game doesn’t pull its punches in depicting these scenes. Firstly, the girl will slowly walk up the steps to the platform, where the executioner’s object will be there, set up and ready to go. It might be a noose. It might be a guillotine. It might be worse. Regardless of what’s about to kill her, after considering these objects for a moment, the girl walks up to the object, puts the noose around her neck or settles in to the guillotine’s traps, and waits. A few seconds later the device activates and we watch the girl being executed. It’s explicit, it’s painful, and it is terrifying to behold. Then she’ll resurrect, feeling momentary pain, before continuing on with her journey, with a new path opened up to her. 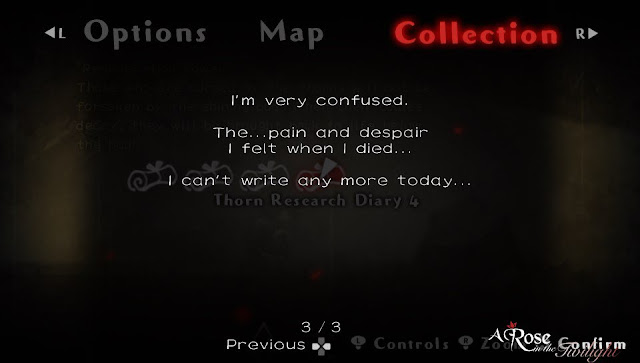 These scenes are affecting, and because A Rose in the Twilight isn’t the longest game out there – at least in terms of raw content – you’re never given the chance to become comfortable with them. This tone of gothic melancholia is reinforced through a haunting but beautiful soundtrack, and the blood of the dead people that the girl comes across. Each time she absorbs the blood of a dead person, she’s treated to a stark, brutal vision of how they were killed. These visions are presented as though stage plays – assuredly a commentary on the perverse entertainment that we draw from violence – and are just as affecting as the girl’s own executions. I found with this game, if I played for too long in a sitting, I started to feel claustrophobic, because the game creates the kind of experience that demands complete immersion, but there’s no relief once you start playing. This isn’t a criticism, mind you. Quite the opposite. It’s incredible just how much intensity has been worked into a game that, on the surface, looks quite simple.

Thankfully, the core gameplay mechanics make it easy to play in short bursts. Each room in the castle offers one or two puzzles to navigate through before reaching the end. The puzzles make use of a few previous abilities; the girl’s ability to give and take blood, and the golem’s ability to pick up and throw things. You would think that such simple mechanics would make for simple puzzles, but no; puzzles are very fair, but require real logical thought put into them. It’s a rare puzzle that will test reflexes or timing (though one or two do require one character to use their ability at just the right moment as another character does something), and you’ll very rarely feel rushed. You’ll be able to take your time and properly survey the environment before coming up with the 3, 5, 7, 11 (and so on) sequence of abilities between the two characters that will be able to complete the puzzle, and then you’ll be in a new room, and able to save and exit if you need a break. The slow, deliberate pacing of the game meant that there were times I’d only complete one or two puzzles before playing something different, but because the raw vision of the game is so memorable, the overall experience remained cohesive, because I had (and still have) every scene in the game burned into my brain. This is one I won’t be forgetting in a hurry.

Some people will be put off by the painstaking pace the characters move at. They amble along at a crawl, and without so much as a run button, you’ll spend a fair amount of time within the game’s limited run time simply watching the characters move, listening to their footsteps echoing through the deserted halls of the castle. Some will chalk it up as “boring,” but the effect is deliberate; firstly to remind the player how fragile the girl is and how cumbersome her only ally, the golem, can be. More importantly, it’s there to build the game’s dense atmosphere. The lonely “tap-tapping” as the characters move around evokes an Edgar Allan Poe-style poetic rhythm to the game’s progress, and the vast emptiness that the game implies about the size of the castle as a result makes it feel grand, elegant. Like the Castle of Otranto, its ability to dwarf the players within it makes it the perfect setting for a gothic melancholia atmosphere. 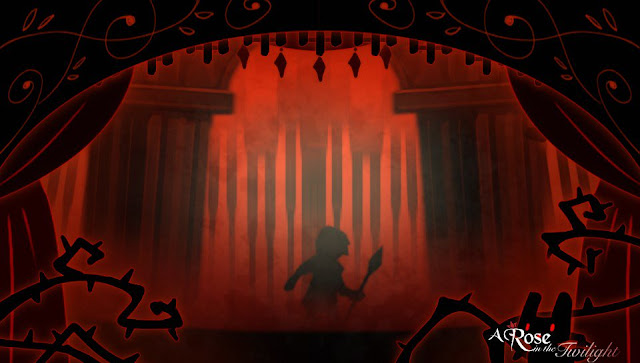 Related reading: The first title in this thematic trilogy by NISA is The Firefly Diary. Matt’s full review.

A rose is perhaps the ultimate symbol of the link between pain and romance. It’s the flower that is considered the most romantic or beautiful by many, if not most, but it also has sharp thorns; thorns that will prick you badly and make you bleed if you’re not careful with them. A Rose in the Twilight is, in its entirety, a metaphor for the rose itself; it’s a truly beautiful masterpiece, but it’s also a gothic kind of beauty, in that it’s more than happy to stab you sharply, even as you appreciate everything about it. It’s a ravishing, masterful work, that will be played by just a handful, but hopefully remembered for a long time to come.