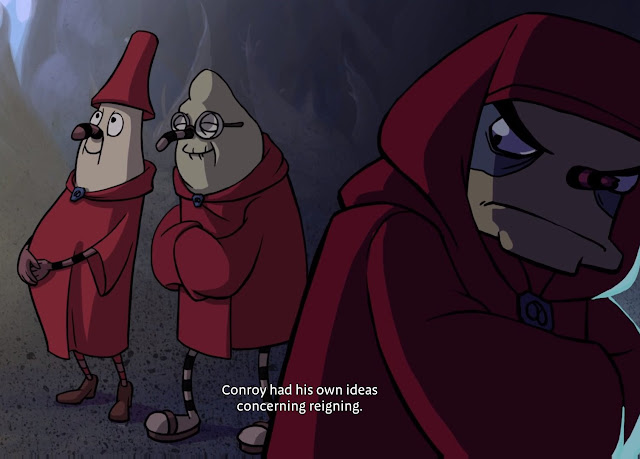 Robert, our young hero, wears a striped windsock on his nose. Peck the pigeon looks rather like a sausage balloon and has a thing for old, smelly fish. Uncle Conroy is a killjoy and worse – never before has the phrase “Bring me the hedgehog!” instilled such utter terror in me as when uttered by Conroy. These are just some of the quirky characters you encounter in the utterly charming point-and-click puzzle adventure The Inner World. The charm of this game grows on the fertile soil of a unique hand-drawn art style that looks simplistic and cartoonish (with bold outlines) at first glance, but fits the purpose and target audience (PG rating for family-friendly) like, well, like a windsock over a flute nose!

Robert is an oddity in the world of Asposia. His nose has four holes, which can be played as a flute. So Uncle Conroy, the last powerful wind monk abbot in Asposia, has kept the embarrassment Robert shut away at the monastery all his life. One day, Robert tumbles down the garbage chute and faces life as led by normal Asposians. The outlook for Asposia – a spherical world surrounded entirely by earth – is slow asphyxiation, for two of the three wind fountains have ceased to supply fresh air. The wind gods in their anger have, so says Conroy, sent the Basylian dragons whose stare will turn people to stone. Robert starts out on a journey that will lead him to discover the truth behind Asposia’s predicament and, of course, pose the ultimate challenge: to save this world. Little does Robert know that this quest is entwined with his own mysterious family history.

Early on, Robert meets sassy thief Laura, who sports an attitude to match the glamorous Wanted! poster that so deeply impresses him. They are the ideal adventuring match, with Laura’s hard-nosed, sarcastic personality a great foil for Robert’s sweet, innocent nature. In fact, Robert’s cluelessness about practically everything turns out his greatest weapon in subduing unwilling, uncooperative Asposians and a source of humour in the conversations. If you are one of those players who likes to skip through dialogue really fast, you will likely encounter the one unfortunate glitch in this game: click too quickly on a dialogue bubble (especially one that occurs just before a cutscene) and the game may freeze. This happened twice to me. Fortunately, the game autosaves really well, and I never lost any progress whatsoever upon restarting. I confess to being an impatient ‘fast clicker’ in many puzzle adventure games; but in The Inner World I became so engrossed in the whimsical universe that I happily read dialogue entries not strictly needed to progress the action, simply for the pleasure of finding out more about what makes this world tick and listening to the excellent voice acting bring it all alive. 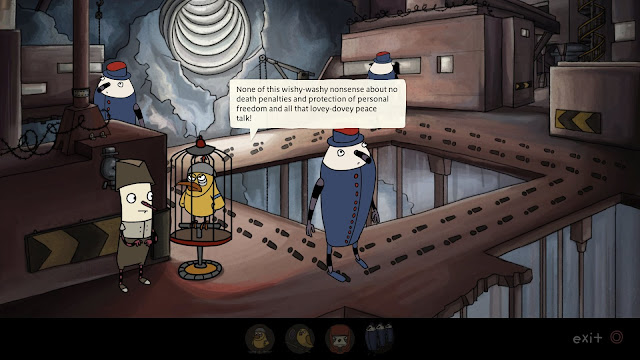 You’re in for a shock If you are expecting really basic, mundane puzzles to breeze through the story’s five chapters. These are some pretty twisted, often Russian-doll-type demanding puzzles, and the developer incorporated a step-by-step multi-level hint system for a good reason. The key to puzzle nirvana lies in reprogramming your mind to think like an Asposian, for our own drab logic will not come up with the imaginative solutions you need to get Robert and Laura through the pitfalls strewn across their journey. This highly creative process of puzzling makes The Inner World ideal as a family game; both young and old(er) will find enjoyment on many levels. I never expected experiences such as getting the absolutely most unlikely creature drunk, undressing a holy man, or getting a hedgehog high on a ‘substance’, and these will stay with me for a long time. Most puzzles, once solved, feature a short, gratifying animation, and the more extended animated cutscenes between story segments really bring the whole game to life. The innate problem of this genre – a succession of static puzzle scenes – is aerated (!) by the judicious use of beautifully executed animations throughout all aspects of the game.

Laura turns out to be not just a convenient side-kick but a pivotal character in the unfolding secrets, for the search for her missing father will bring them to the epicentre that decides Asposia’s fate. She takes over the action and puzzle-solving in one chapter entirely. In the final chapter, Robert has to take on the ultimate fight on his own; which is fitting, I suppose, but did leave me wishing they could’ve cooperated in the grand finale. I’d be delighted if developer Studio Fizbin manages to get both characters puzzling together in the sequel due later this year. I wasn’t expecting much character development in a puzzle game, but Robert’s journey and its darker moments shape a more mature and rounded person than the guileless boy we meet at the beginning who will annoyingly keep asking “But why?” and repeating people’s phrases as questions. And Laura, too, goes through a transformation that is not unexpected, but nonetheless pleasing.

I had a great time playing The Inner World and was sad to say goodbye to its wacky denizens, the cheeky humour and the fairytale world of Asposia. The transition from original PC game to PS4 is solid and I’m happy to say the controls and uncluttered menu system work as well as one could hope for on console (cue: sidelong glance at Deponia). If there is one weakness to the storytelling, it’s the somewhat predictable finale; it’s as if the participants had run out of air in the end … ahem. The Inner World does not try to reinvent the wheel, rather it sticks closely to the classic gameplay of its genre. This is no criticism when the adventure tale is this well executed, offering ample delight for eye, ear and brain. The story of Asposia is a cohesive work of art, more than just the sum of its parts glued together, and that is why I will remember it when other puzzle games have faded from my inner eye.

Game Theory: On Persona 5 and the perception of reality