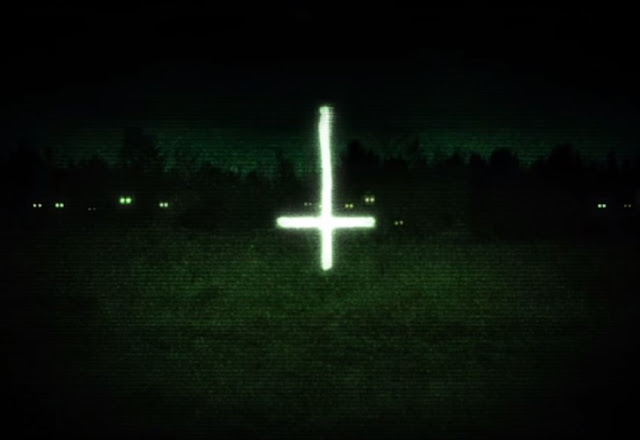 Games academic, Ian Bogost, recently wrote a piece that proved to be controversial. In it, he laid out some of the issues in the way that game creators often try to tell stories using similar narrative structures to what those in literature and film have traditionally done; effectively arguing that games should stop trying to conform to the narrative structures of those other mediums, and should find their own identities.

Outlast 2 was coincidentally released at the same time as this article and proves the point perfectly. What we have here is a through-and-through attempt at the kind of revolutionary shock horror that made books such as Matthew Lewis’s The Monk and Marquis De Sade’s 120 Days of Sodom so effective, and were later brought to film via the work of people like Eli Roth in Hostel. It’s a nasty, sadistic game that works really, really hard to do what it wants to do, but its utter artificiality as a result of it being a game, and not a book or film, eventually compromises everything that it looks to achieve.

There’s the perception, early on, that this is an exploration game. Where the first Outlast confined your unfortunate protagonist into hallways of a hellish mental asylum, this one drops our “hero” into what looks like an open wilderness in the backwaters of America, and initially this is an intriguing idea; you’ll wonder if you’ll be able to explore around and approach the horrors that you know are ahead at your own time and on your own initiative, but it doesn’t take long for it to become obvious that this game’s every bit as linear as the first. Every moment of the game is heavily scripted, every challenge has a single solution, and there are no opportunities of any substance to deviate from what the game wants you to do. 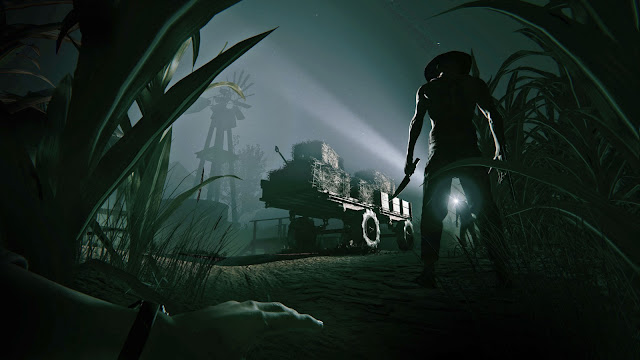 The reason for this is obvious; Outlast 2 needs to be so highly scripted, because it tries so hard to be so cinematic that any deviation from the game’s set pacing would test the carefully-constructed atmosphere the game looks to achieve. Putting aside for a moment that, at 8-10 hours, it’s far, far too long for shock horror (I was well and truly numb to everything going on halfway through), Outlast 2 seems to be a game that the developers would rather you didn’t play at all, for they’ve carefully planned out every second of the journey.

The artificiality of it all really breaks the game’s immersion when your character starts dying. Having to replay sections (as generous as the checkpoint system is) ruins the suspense; you know exactly what’s coming up next. This is an issue with all horror games to an extent, but you feel it all the more keenly in Outlast 2, as there’s no combat to speak of. You see a monster, you run and hide and wait for your moment to escape; if you need to do this again and again to figure out the best way to run and hide from the monsters, you’re quickly going to lose any shock that you might feel in encountering them.

It’s also a game that relies on its extreme violence and sadistic edge, and the more repetition you introduce into that kind of experience the less engaging it progressively becomes. I have to make it clear that this game really is sadistic; at one point my character was nailed to a cross, and seeing this through the first person perspective was is pretty affecting. There’s sexual violence at points, and even though you never get a chance to really get to know your character’s wife (as she’s barely given any screentime that doesn’t involve horrible things happening to her), seeing and hearing what happens to her can only be described as genuinely horrific. There are endless scenes of gore, torture, and plenty of hideously ugly monsters to cap it all off; as I said, it’s the kind of game that needed to be over in two hours, not ten, because it’s so relentless that it becomes quite numbing. There’s little argument, however, that out of all the attempts to bring goreporn to games, this is the most effective. 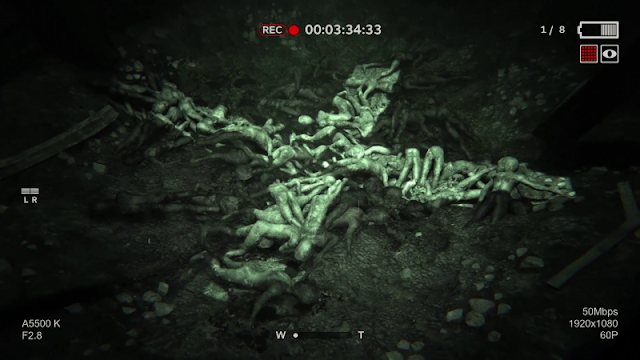 The game tries to make a point of it all, though, and this is its most significant failing. Like Lewis’s The Monk, or the writings of Marquis De Sade, the subtext to what’s going on is that it’s all a damning criticism of religion. So much of that extreme horror was written out of a revolutionary spirit to tear down what the authors saw as a hypocritical organisation that was inflicting violence on people every single day. Eli Roth cottoned on to the same spirit in Hostel, replacing religion, whose influence weakened substantially over the years, with a different kind of abusive system; in his case capitalism.

The authors and artists behind these works made the horror so extreme because they were so completely angry with what they saw as grave injustices in the world. The intensity and brutality was an almighty scream of frustration and, often, impotent rage against an overwhelming force that dominated (or dominates) life.

In contrast, Outlast 2 feels forced – like it’s pushing for the most extreme imagery not because that’s what hit the artists in a fit of revolutionary creativity, but rather because a development team put their heads together and came up with each scene as an ultimate violence to inflict on the player. It feels dry, even cynical, and too measured to properly generate a response of raw, claustrophobic, fear. Religion is an easy target now, so right from the start the’s a less grand intent behind the narrative, and the developers were also quite careful to take the imagery far enough to the extreme so as to create that safe distance between what the player witnesses, and the behaviour of religions in the real world. Lewis’s monk and the priests that pop up in De Sade’s stories are from the actual church, which is why they’re so controversial, and the books so powerful; what they depict is not what the church is meant to stand for. 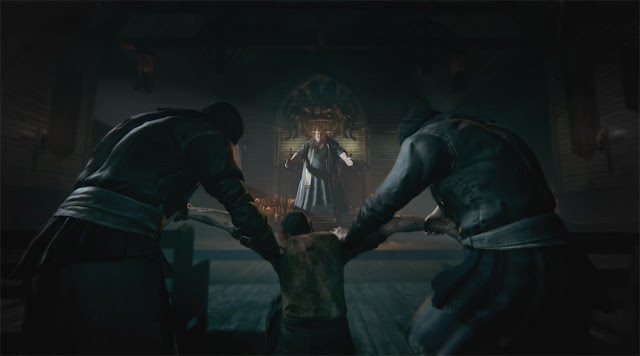 Outlast 2 is oddly safe for how extreme its visual depictions can be. Yes, it’s obvious that the game’s about Christianity, but it turns Christianity into a cult, rather than depicting the day-to-day members of the religion as hypocrites, rapists and murderers. Once you turn things into cults they become easy targets. There’s no social or cultural critique in depicting cults as the bad guys, because everyone knows cults are scary and filled with scary people. It’s easy to dismiss a Christian cult as something different to Christianity. It’s clear that the developers wanted to criticise religion – and particularly Christianity – with their game, but they compromised their own vision in bastardising the religion so much in the process.

As a horror experience Outlast 2 works as a bit of grindhouse exploitation. It’s intense, it’s sharp, and it’s a grisly, beautiful game. But it’s also so linear and tries to be so cinematic that it opens itself to comparisons to similar stories told in other media, and as weird as it is to say, Outlast 2 is also far too safe. When Bogost writes about games finding their own identity, he means games like Outlast, which should stop trying to tell stories like Marquis De Sade did (because no game developer is confident enough to actually do that), and should instead find ways of exploring those same themes that play to the strengths of the medium. Outlast 2 doesn’t seem to want to be a game at all, and it’s inviting comparisons to great works of art that will never go well for it by doing so.