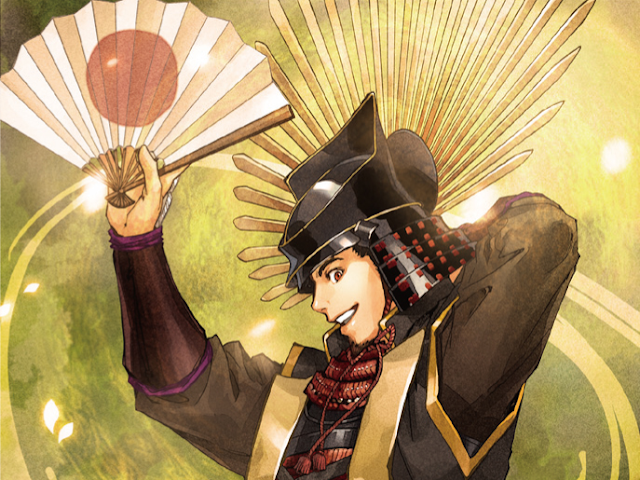 So, for all those people interested in learning a little bit more about the history of Japan, I’ve started a series of pieces looking at various elements of Japan’s history and its personalities. If there are any particular bits of history you’d like to learn about, please do drop me a note.

Yesterday we looked at the first of the three “great unifiers;” Nobunaga Oda. This time around we’re going to take a look at the second, and in many ways the most interesting, Hideyoshi Toyotomi.

As I mentioned in the piece on Oda, the three unifiers had such different approaches to the task of taking a nation torn apart by centuries of civil war and bringing it back together again that a little story about how each of them approached a simple problem became a defining summary of their personalities:

So, what does this quote mean for Hideyoshi Toyotomi?

“Little bird, if you don’t sing, I’ll make you sing”

Toyotomi wasn’t exactly a nice fellow; amongst other things, just after Nobunaga Oda had opened the country to Christianity, Toyotomi, following Oda’s death, decided to crack down on non-state sponsored religion and crucified 26 Christians, which led to the religion being driven underground for some time afterwards.

But his was also a true rags-to-riches story, and we all love a good one of those. So fantastic was Toyotomi’s rise to prominence that it was him, and not the other two great unifiers, that Japan’s great historical fiction writer, Eiji Yoshikawa, immortalised in a novel – Taiko – which I highly recommend to everyone interested in Sengoku Japan.

In short, the man who would become Hideyoshi Toyotomi after a number of name changes started life as the son of a mere peasant warrior, and we don’t know a whole lot more about his early years than that. According to Yoshikawa’s story (and it must be assumed that there are significant embellishments here, though there’s likely the seed of truth buried within), Toyotomi was sent to a temple to study, but finding that not to his taste, he instead adopted the name Kinoshita Tokichiro and went on a journey, finally joining the Imagawa clan as a servant to a minor ruler.

He came across some money there – not legitimately – and left, winding up joining the Oda clan as a sandal bearer to Nobunaga Oda himself. This was a very humble role, to say the least, but he quickly found himself in Oda’s good graces and was soon given supervision of the repair of a castle, and managed its kitchens.

After building or repairing other castles in critical locations, it soon became apparent that Toyotomi had a number of particular talents that would serve the Oda clan well; he was an expert in logistics and people management, and he was superb at negotiation. He was able to acquire the well-regarded chief strategist of a rival clan, Takenaka Shigeharu, through negotiation, and thus saved the Oda clan a real headache in removing that major threat from their campaigns.

He also proved himself to be a tactical genius on the battlefield, handing Oda an easy victory in his most famous battle, the siege of Inabayama Castle. It was at that point that he was elevated to the ranks of Oda’s most valued generals, and he adopted the name Hashiba Hideyoshi.

As valued as he was, Toyotomi was often the target of jokes by Oda and other generals. He was given the nickname “Monkey” on account of his physical unattractiveness. He was also notoriously unfaithful to his wife, Nene, whom he married early on. Japanese samurai lords were never the most faithful of men, but Toyotomi was particularly renowned for his love of women other than his principal wife.

By the time Mitsuhide Akechi betrayed and killed Nobunaga Oda, Hideyoshi was one of the most powerful generals in Japan, and upon hearing of Oda’s death, he quickly moved to exact revenge on Akechi, and then removed another powerful Oda general, Katsuie Shibata, to absorb the remainder of Oda’s forces into his own.

From there, Toyotomi continued Oda’s work. He took control of Shikoku Island and conquered Kyushu, effectively bringing all of Japan under his control. He chose Osaka to be his seat of power, and constructed the magnificent castle that was burned down, but subsequently reconstructed, which you can see today if you head into the city.

With Japan now stable, Toyotomi had two goals remaining; secure his line and dynasty, and launch an invasion of China. The first he struggled with mightily, with heirs dying; at one point he needed to appoint a nephew to ensure that someone could take over in the event of his death. Toyotomi’s ruthlessness became apparent when, after the birth of a son of his own, Hideyoshi ordered his nephew to commit seppuku (ritual suicide) to prevent a succession dispute, and he additionally murdered his nephew’s entire family, including women and children. This was also the point when he cracked down on religion and ordered the execution of the 26 Christians.

He launched two campaigns into Korea, in a bid to secure a path into China. The first campaign was relatively successful, with the Japanese forces holding both Seoul and Pyongyang, before the Korean navy was able to destroy the Japanese boats and prevent resupply efforts. A Chinese army then rushed to support the Koreans in driving the Japanese out of the key cities. A second attempt to invade Korea struggled from the outset, and Hideyoshi died while on this campaign.

Following his death, Ieyasu Tokugawa was to become the third great unifier of Japan, and the only one of the three men who was actually able to claim the title of Shogun. Tokugawa was fortunate, in a way, since he inherited a number of Toyotomi’s domestic policies that helped keep the ruling classes in control. Toyotomi hadn’t allowed the peasants to arm themselves, which created a distinct line between the samurai and working class. He had also imposed extreme restrictions on travel, a more advanced taxation system, and a detailed census to better understand the population.

When we see Hideyoshi Toyotomi presented in video games, he generally is depicted as a relatively unassuming fellow. Nobunaga Oda always has a sinister gravitas, while Toyotomi tends to be a lithe fellow, with monkey-face features to emphasise his nickname. He comes across as oddly charming and appealing as a result, a more earthy, natural fellow whom we want to like on principle.

What we don’t generally see in games is Toyotomi’s darker side. The most obvious example I can think of is in the Samurai Warriors series, where we often see him fighting by his wife’s – Nene’s – side, who is also a playable character. None of the other women Toyotomi bedded are depicted in the game at all, and this is different to Nobunaga, whose boyfriend, Ranmaru Mori, is indeed present.

We also don’t get a sense of Toyotomi’s aggressive domestic and foreign policies. Again, It’s relatively easy to depict Nobunaga Oda in games as a close proxy for the real man, because a lot of Oda’s “sins” were committed on the battlefield. By contrast, I feel that many people who find Hideyoshi to be a fun, quirky, clever character would be surprised to learn about the real man. While Hideyoshi was a relatively “clean” general for the era, and even loyal in the way he immediately moved to avenge Oda after Mitsuhide Akechi betrayed him, the quick-talking larrikinism we generally see in games (and, indeed, other media) means that Hideyoshi Toyotomi is perhaps the least accurately depicted hero in future retellings of Sengoku history.