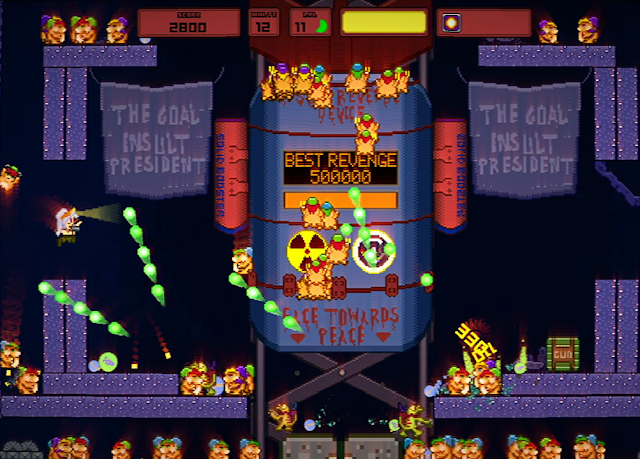 Relying on an amusing style that wears its retro arcade stylings on its shirt sleeve, Molemen Must Die! never takes itself too seriously. With a focus on lightning quick action, rapid deaths and achieving the highest score possible, this game reminds me of the quarter munchers of old – for better and for worse.

To start off, the plot here is pretty thin, which is of course something that arcade games of old were well known for. Anyone who played Bad Dudes (the president has been kidnapped by ninjas!) or Double Dragon (the girlfriend has been kidnapped by a gang!) knows that a splash of story upfront is about all you need to give the upcoming carnage purpose. Here we have a temper tantrum throwing president who is overreacting to a public slight. If this sounds at all familiar then… well, congratulations: you probably turned on the news and seen what’s been going on in the United States in the last couple of months.

In this case, the thin-skinned president took a pie to the face courtesy of the Mole King. The appropriate reaction? Well, one could wipe the pie off, or perhaps ask security why they were taking a nap during the incident. However, the obvious choice is to arm a massive bomb that is being sent into an enormous hole with the intention of having it go off as close to the centre of the Earth as possible. The parallels to a president who became famous for the line you’re fired!” and now has access to the biggest red buttons in the world are pretty hard to miss.

Of course this is all ridiculous, and it’s meant to be. It however manages to set the stage for the chaotic combat that sees you taking control of a soldier who has the sole job of escorting the bomb as far as you can. Combat is centred on jumping and shooting with loads of crazy power-ups that attack the Molemen and their allies in a variety of ways. Everything is drawn in a pixelated sprite aesthetic that fits the feeling of the title quite nicely, with lots of projectiles, explosions and critters all presented in brightly flashing colours.

The gameplay revolves around a continually downward scrolling screen (which is a nice change from the usual left-to-right you see in action/platforming titles). You can’t get too far ahead of the bomb. Fall off of the bottom by getting too far and your fellow will die. Also, you need to actually protect the bomb. The Molemen will latch on and damage it, trying to end its descent prematurely. Aside from having to deal with loads of overly aggressive critters that want to take you and the bomb out, you have to navigate projectiles of theirs (such as upward flying rockets), spinning platforms and more. The deeper the bomb makes it, the better your score.

Once the match ends you get a status report on how you did (often including some pretty ridiculous comments at the bottom like “At this depth, the bomb demolished most of New Jersey’s coffee houses!!!”), and you get new random power-ups for your next round. Also as you gain experience, you unlock access to new types of weapons. Online leaderboards serve as the primary reason to fight Molemen Must Die! up again, as this is not a game with an ending. That lends solid ‘one more time’ feel to how the game plays, making it easy to pick up and give it a few goes before inevitably moving onto something else due to the lack of continued narrative or overarching goals. 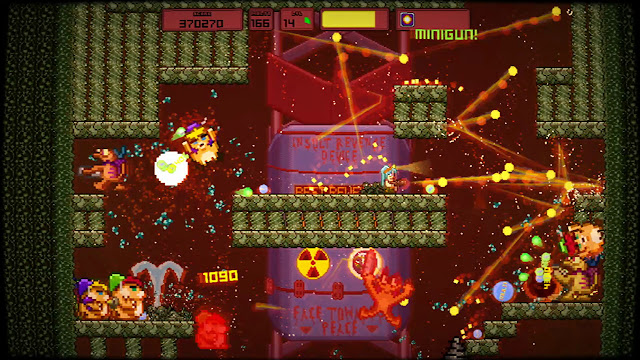 I will strongly recommend playing this game with a controller. Mouse and keyboard work just fine but… seriously, pick up and use your controller. Movement with jumping and shooting buttons just work far better with a controller in-hand. Even with a controller, you are going to die and while I usually knew why – there were times where my eyes were not on my character and I was not certain what took me out. The chaos cannot be overstated here, nor it’s difficulty. It’s the kind of game that a certain niche will find challenging, and will make some incredibly… acrobatic… feats proving their skills, but that lack of more tangible goals will always limit this experience to other people.

Molemen Must Die! is a pretty solid action title, especially given its low price. Certainly it is a shallow game, but at a price point of three dollars, it’s not hard to get your money’s worth out of it. If you like a good laugh at the expense of an overly sensitive man who wants to build a wall… erm,  drop a bomb, then you will likely get a chuckle out of the premise here. However, other than a few bits of background signage and the wordless introduction that quickly plays out at the start of each game, the political tongue-in-cheek is quickly forgotten in favour of the frantic action.