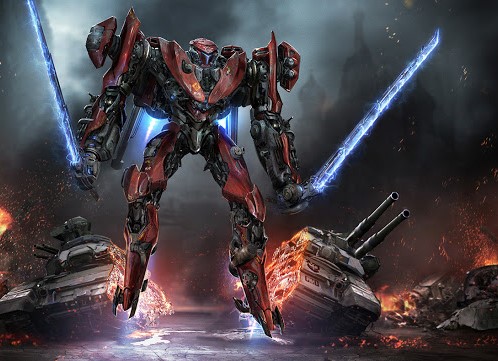 MechRunner is an endless runner with guns and and a Transformer-like robot that can shift between tank and bipedal forms. That isn’t necessarily a recipe for a great game, but it should at least be a recipe for a bit of mindless fun. Unfortunately, MechRunner only really delivers on the “mindless” part; a combination of dull gameplay and clunky design make this a game with little enjoyment to be found.

At the most basic level, MechRunner works like any other endless runner: your character moves forward automatically, you strafe left and right to avoid obstacles, and the speed (and therefore the difficulty) increases as you get further along. This is where MechRunner starts to fall apart. Most endless runner games have distinct “lanes”, which make obstacles clear cut – if you’re in the same lane as the thing, you crash into it and die.

In MechRunner, you can freely move left and right within the game area, which means crashes depend on collision detection. MechRunner’s hit detection is really uneven, so much of the game is spent running into things that, visually, you cleared with ease. That issue gets compounded by collapsing buildings that regularly put debris in a path that was clear beforehand, often with no time to get out of the way. Luckily, a crash isn’t instant death here; you can weather a fair few collisions before you die, but it’s still frustrating to keep losing health to things beyond your control. 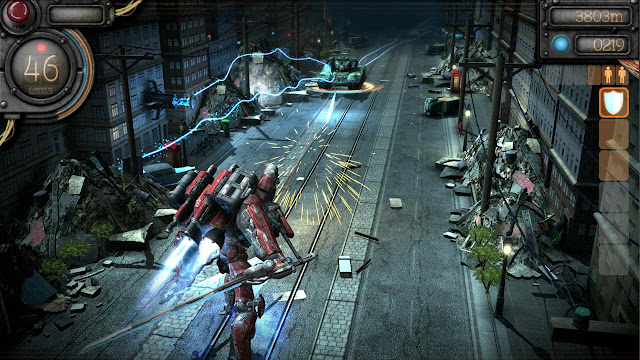 It’s also not clear, at least initially, what debris counts as an obstacle and what is just set dressing. MechRunner takes place in a dystopian future, in the midst of a collapsing city, so the streets are rife with abandoned cars, collapsed buildings, and piles of junk. Some of these things are small enough that your mech can just blast through them without a scratch, while others take a chunk of your health. That’s fair enough, but the distinction isn’t really clear cut, so it takes a bit of trial and error to figure out what’s safe and what isn’t.

It’s a running game first and foremost, but MechRunner is also a shooter. In tank form, you can fire laser shots and missiles, while robot form has a sword and machine gun. With these, you can take out enemies that get in your way.

This is where things get weird. MechRunner is an endless runner, but the running stops when you encounter enemies. At this point, you simply strafe from side to side to dodge their attacks, with no forward momentum, while firing back. Some enemies move about, but they’re rather slow and the space for combat is small, so you never really need to worry too much about aiming. Just avoid their gunfire and shoot, and they go down quickly enough. On its own merits, this battle system works well enough, but it’s weirdly disjointed from the rest of the game, which is built around speed and momentum. 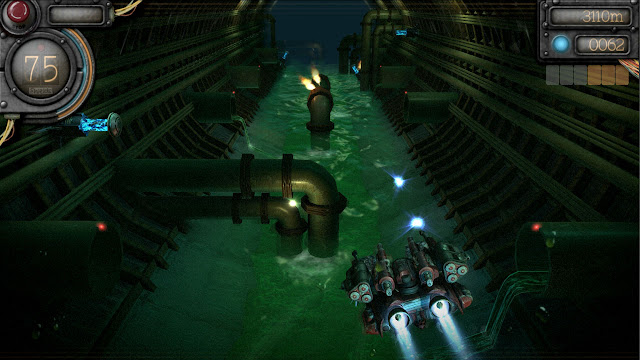 That’s more or less all there is to the game. The enemies are few, and despite minor differences in their weapons and how they move, they’re all fundamentally the same in how you deal with them. It gets very tiring very quickly, and this is where the final little problem comes in: if you want to “progress” in any meaningful sense, you need to spend a lot of time running, shooting, and running some more. There are different guns and upgrades, but you have to unlock them by levelling up and buy them with energy shards collected when you run. You’re going to need a lot of experience points and a lot of shards, even just for the first tier of upgrades, and they don’t really offer any substantial improvements. Were the game itself more engaging, this wouldn’t be an issue, but as it is it’s just a lot of work for very little payoff.

Related reading: Another endless runner on PS4 that you might want to consider if you’re a fan of the genre is Infinity Runner. Matt’s full review.

The one group of unlocks that is worthwhile are new levels, but as you might expect, these are the most expensive things in the game. If you get bored of the decrepit city, you can look forward to a sewer or a railway line, but you’re going to waste a lot more time in the city before you can get to either of those other locations. And when you do, it’s just more of the same, really.

MechRunner might work as a mobile game. With some fixes to hit detection, it could be a mildly enjoyable way of wasting a few moments while you wait for a bus. But when I settle in and get comfy for some gaming at home, I want something that’s going to hold my attention for more than five minutes, and MechRunner barely manages even that.