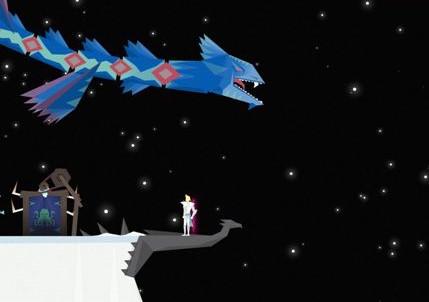 Sometimes the indie scene catches you by surprise. Whether by novel gameplay mechanic, unexpected plot twist or affecting graphical style, the best indie games manage to make the player stop and say “well, I’ve never seen that before”. In Polish indie duo Lichthund’s Lichtspeer, that moment occurs about 20 seconds into the game where the player speaks to a bored space god who only wants to see the world burn. Releasing on PSVita after successful PC and PS4 launches last year, Lichtspeer is pure irreverent arcade action.

The core game is very simply about tossing spears. Aim is paramount as varieties of enemies stream from one side of the stage, eager to munch on slower players. Bonus points are awarded for styling on your opponents with headshots and long shots. It’s all quite standard fare. There is a slight element of strategy through the unlockable and upgradeable special moves, which in later levels will need to be rationed out in appropriate moments, but there’s still not enough to create depth.

It is impressive how many levels and how many variations Lichthund manage to create using this premise. The game is a series of stages, each with five individual levels, and your score is tracked across each stage and aggregated onto an online leaderboard. I didn’t find any individual stage particularly memorable – they’re mostly differentiated by music and art assets rather than gameplay – but there were a lot of them. For the asking price, this will take you some time to complete. An additional “rage-quit” mode provides the challenge for those seeking it, but I found the normal difficult was more than adequate. 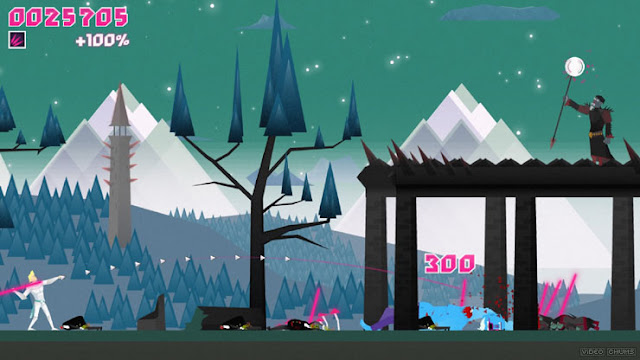 Lichtspeer is one of the most aesthetically cohesive indie games I’ve played in a long while. It’s one third 1980’s sci-fi, one third 2080 dystopia and one third 800BC Germanic mythology. The graphics are sharp and angular – fluid in motion and clear enough for unimpeded gameplay. There’s lots of small jokes thrown into the backgrounds and enemy designs for the overly attentive, which goes to show how much care went into the game’s development. The soundtrack is all pulsing industrial dance music, and while it’s silly to complain that an industrial track is repetitive, after grinding through level after level it just proves too much for me.

My main fault for the game, especially the Vita port, is the controls. The little left joystick is just too imprecise to measure your shots quickly enough for the later levels, the touch screen is hard to use because you tend to cover parts of it up while aiming. While I appreciate the option to use the rear touch pad it just feels off. (I’ve never found the Vita’s rear touch pad useful for any game, but perhaps that’s my personal preference). Regardless, between the three control schemes and the option to adjust sensitivity, it’s still down to a matter of finding the least-bad way of aiming – Lichthund’s team has tried to be as helpful as poissible, but the hardware lets the game down more than anything else.

And this rolls forward into unfortunate implications for the game as a whole – it’s really, really easy to criticise on a mechanical level. Chucking spears is great but enemy designs create incremental difficulty by having smaller and smaller vulnerable points. Levels start to feature multiple threats coming from different areas which make much of the game a juggling act. Unlockable spear powerups serve as a delaying agent for the inevitable, overwhelming death awaiting you, at which point you end up feeling like a plaything of a sadistic god. And, most importantly, a tiny, rapidly zigzagging fish is hilarious the first time it kills you but less so on the second, and not at all on the third. Lichtspeer is still loads of fun, don’t get me wrong, but most of that fun comes from aesthetic design and not from the gameplay itself. 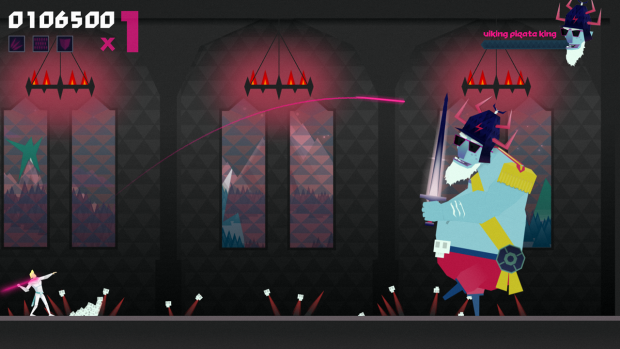 Except the bosses. The bosses are hands down amazing because they take the scattered, everything-is-out-to-kill-you menagerie of the normal levels and distil it into a choreographed battle of wits between player and designer. There are still tiny hitboxes and small windows outside of which certain death looms eagerly, but it’s easier to forget because there’s direction in the conflict. I like my boss fights to feel like a reward rather than a challenge, and Lichthund really get me on that front.

And with that, the split between aesthetic pleasure and unforgiving gameplay will be what drives the spear between whether this game is a worthwhile buy or not. There are a few things which the developers get absolutely right, and as a product of a small-team it’s fun to simply celebrate the sheer joy with which Lichtspeer was made. There’s value in the art, the style, the writing and the magic when it all comes together. As much as I enjoyed all that, however, I can’t say that this is a game which plays well.