Children of Zodiarcs on a roll

Children of Zodiarcs is a Square Enix Collective-approved title with a highly successful Kickstarter campaign behind it. Square is now publishing the game for PC, Mac, and PS4 later this year, saying they’ll have further details and release dates”very soon”.

According to Cardboard Utopia’s Kickstarter page, “Children of Zodiarcs is a story-driven, single-player tactical RPG that combines traditional tactical gameplay with the thrill of collectible cards and craftable dice.”

The story initially sounds ho-hum — an evil empire, a group of young rebels fighting against the corrupt system — but soon develops intriguing facets and a mysterious world. On the hunt for an ancient relic, the group seeks refuge in the city’s desolate slums. They are pursued by heavily armed city guards, rival gangs and psychotic families of subterranean cannibals. In the world of Children of Zodiarcs, no one escapes unscathed.

For gameplay, cards take the place of all abilities and attacks, drawn at random from your custom-built decks during battle. The ability to build your deck of cards and customise your dice makes combat in Children of Zodiarcs about how well you can adapt to changing situations.

Konami has finally released Suikoden IV (the sequel to one of our top 100 games of all time) on the US PlayStation Network. The European PSN added the PS2 Classic title already in November 2016. This means Suikoden IV can now be downloaded to your PS3. The series reissue is thus almost complete; only Suikoden V is missing and surely Konami will oblige in due time. 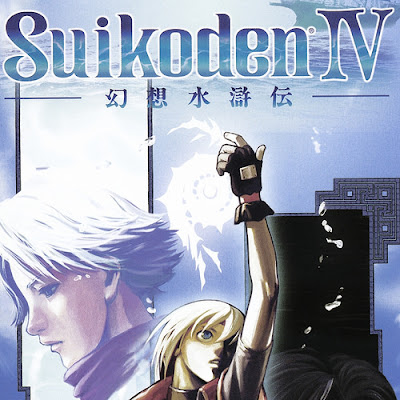 Suikoden IV is a prequel (by 150 years) to the first Suikoden game and proved a rather divisive entry in the series. This new release — 12 years after its launch — weighs in at 4GB and at $9.99 is priced at the lower end of PS2 Classics.

Square Enix shared the latest on Dragon Quest XI in this week’s issue of Jump magazine with the reveal of two new characters: a young girl named Senya (right) and a fearless genius named Veronica (left). 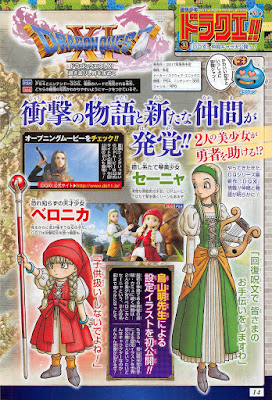 Senya The Peaceful Maid: “I will help everyone with a recovery spell.” A beautiful girl, found in the game’s opening movie wielding a harp.

Veronica The Prodigy Girl that Knows No Fear: “Don’t treat me like a child!” A strong-willed girl by looks, in the opening video we get to see her unleash attack spells. Senya will serve as the healer of the party, and while Veronica’s role is not specified in the magazine, we could assume her specialty will be spell casting.

Dragon Quest XI releases in Japan in 2017 for PlayStation 4 and 3DS, with the Switch version arriving further down the line.

Spike Chunsoft announced 428: Shibuya Scramble during a press conference at GDC in San Francisco. The game will be released in the west for PlayStation 4 and PC in spring 2018. The Western title of ‘428: Fuusa Sareta Shibuya de’ evokes the famous scramble crossing in Shibuya (a popular landmark in Tokyo). The visual novel/adventure game was first released by Chunsoft in Japan in 2008 for the Wii, followed in 2009 by PS3 and PSP versions, and a mobile version in 2011. 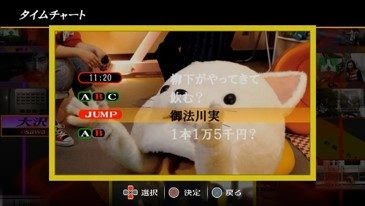 The story, according to Spike Chunsoft’s press kit, centres around a kidnapping on the streets of Shibuya, which brings together a temperamental detective, a hard-boiled journalist, a former gang leader, the head researcher of a big pharma company, and a part-timer stuck in a cat costume. What follows is a series of events each more unexpected and outrageous than the last.

The game features real actors and locations. 428: Shibuya Scramble uses a mix of still photography and live action footage for a cinematic gaming experience that takes you through downtown Tokyo. The narrative employs the JUMP system to move between scenarios as five stories run in parallel, making for fascinating choices as you discover how the story threads intertwine. And sometimes the wrong decision can lead to the right outcome, or at least an amusing game over. 428: Shibuya Scramble offers over 50 endings, multiple bonus modes and extra scenarios.

New details on Toukiden 2 ahead of release

Koei Tecmo has shared new information and a new trailer for the upcoming Toukiden 2, including details on its character creation system, new enemies, and online features.

Read the details below:

Toukiden 2 offers a rich online environment in which Slayers can team up to take on the ferocious demons known as Oni. Slayers will find mysterious Portal Stones scattered throughout the Otherworld, which, when touched, will transport them to the multiplayer lobby. Accepting missions at the Command Hub will allow up to four players to take on Oni throughout the Ages, granting them the upper-hand in battle with well-coordinated teamwork. Multiplayer features can be enjoyed on both PlayStation®4 and PlayStation®Vita system versions, with local ad-hoc network multiplayer available for PlayStation Vita users. Each Slayer can make themselves unique by utilizing the game’s vast character creation system, which boasts a wide variety of different visual styles never previously available in the Toukiden series.

Online multiplayer mode aside, the campaign experience has also been heavily enhanced for Toukiden 2. Apart from the main storyline missions delivered from the Holy Mount, players can explore an immense open world and encounter other Slayers for cooperative Joint Operations. By aiding those in need a variety of rewards become available in the form of weaponry, armor and new Mitama, as well the opportunity to form a party! Those playing offline can carry out Joint Operations by meeting Doppelgangers, the Ghost Data of their friends, which offer the same functionality as human companions.

While carrying out these operations in the Otherworld, Slayers may find it useful to exchange equipment to even the odds against tough opponents. Accessing the Reliquaries – containers for sacred relics – across the world will allow them to place items inside for retrieval by other Slayers. Donating items into a Reliquary not only aids fellow players, but returns an item of equal value! This new feature to the hunting-action genre allows Slayers to unite and aid each other in a way which was never previously possible.

The new additions in Toukiden 2 don’t stop there! The game’s boundless battlefield hosts a plethora of new Oni inspired by western lore. The Drakwing, a beast resembling a legendary dragon, the Canidaemon, a wolf-like creature which harnesses the power of wind and lighting in its tail, the Wingspawn, an Oni which breaths deadly poison which turns humans into demons and the Bruteclaw, a heavily armored six-legged demon are only a few of the new enemies that plague the Ages.

Toukiden 2 will come to the PlayStation 4, PlayStation Vita, and PC in North America and Europe on March 21 and March 24,  respectively. Pre-order bonuses are available from select retailers before launch, including the Tenko Costume armor, which allows Slayers to dress up as their fluffy partners, and the Sanada Masayuki, Sanada Nobuyuki, Sarutobi Sasuke and Chiku Rin In Mitama help bolster player’s skills and abilities.

Review: NieR: Automata; the greatest game ever made (Sony PlayStation 4)