Ripstone Games — known for titles such as Pure Pool and Pure Hold’em — announced a sequel to its 2012 game Pure Chess: Chess Ultra. The new Ultra game is built from the ground up using Unreal Engine 4 and will offer 4K display. VR is also an option, with the Oculus Rift, HTC Vive, and PlayStation VR all supported. We have reviewed Pure Chess in its many iterations before and consider it indispensable for any lover of chess, or indeed strategic board games; you can read our PS4 review here.

Chess Ultra features a plethora of single-player and online game modes. This includes Chess Grandmaster approved levels in single-player, and ranked, regular, Fischer, and Marathon matches in multi-player. A special Twitch integration mode will enable streamers to play against their viewers using the chat window. Chess Ultra is coming to PC, PS4, and Xbox One this spring.

Fight for the survival of the human race in Aven Colony

Texas-based developer Mothership Entertainment has been building Aven Colony with Unreal Engine 4 since November 2013. Its mission (per the developer’s website) is to “create games with depth – games that give players a deep, rich, and interesting landscape of decisions.” Now Mothership and publisher Team17 have released a beautiful new trailer titled A Brave New World.

The player will need to build the colony’s infrastructure, manage resources and the citizens’ well-being, and guide the colony to prosperity — all while coping with the harsh and often dangerous environment of humanity’s first extrasolar settlement on Aven Prime, an alien planet of deserts, tundras, and jungles light years from earth.

Aven Colony offers a rich simulation of an extraterrestrial colony, including a fully functional day/night cycle, player-controllable game speeds, 12 distinct information “overlay” modes, a rich morale system and social policies, and much more. Thankfully, the developers have not forgotten the importance of storytelling and promise a unique narrative revealing the secrets of the civilisation that once lived on Aven Prime. To cope with the complexity of the colony-building, a mission objective system will unobtrusively guide the player at the start of the campaign mode, with broader objectives toward the endgame.

Developer Zeboyd Games issued a press release via a Kickstarter updatefor Cosmic Star Heroine, which will finally launch for PlayStation 4 and PC on April 11. The PlayStation Vita version still needs more time according to the developer, but the PS4 version of the game will be cross-buy with the Vita. 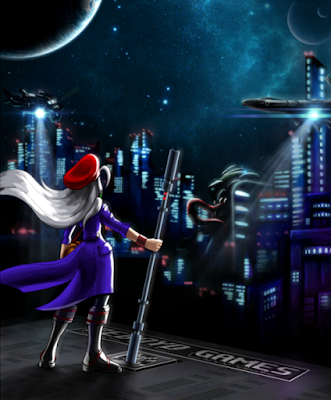 Cosmic Star Heroine has been in development for nearly four years by the two-man studio behind Cthulhu Saves the World. It is said to be inspired by turn-based RPGs such as Chrono Trigger, Phantasy Star, and Suikoden. The hero/ine, Alyssa L’Salle, one of the top secret agents at the Agency of Peace & Intelligence, uncovers a horrible conspiracy. She has to go rogue in order to save the galaxy — but everyone (and everything) is out to stop her!

The game sports modern game design features, such as Save Anywhere, no separate battle screens, innovative turn-based combat system that focuses on flow & strategy, a spaceship for your travel comfort. The nostalgic art component is catered for with a 2D visual style straight from the 16-bit era, animated cutscenes reminiscent of the Sega CD & Turbo Duo era, and a soundtrack by HyperDuck SoundWorks (Dust: An Elysian Tail, Precipice of Darkness 4).

The only trailer available appears to be from E3 2016.

A new gameplay trailer has been released for the upcoming PlayStation 4 version of Ys VIII: Lacrimosa of Dana, focusing on a specific gameplay feature. New to Ys VIII are Domination Battles, a campaign mode that will be exclusive to the PlayStation 4 version of Ys VIII. In this mode, you’ll have the chance to occupy the bases where the beasts of the Isle of Seiren have built their lairs. There, the player has the option of commencing a Domination Battle.

During the encounters, you can place bonfires inside the circles within the area; these will weaken the enemies giving you the edge during battles. There are several enemy lairs across the field, simply destroying them will stop the spawning of beasts around that area. Once you have destroyed all of the lairs or a certain amount of time passes, a boss battle will trigger; when defeated the mission will end, rewarding you with various items depending on your score.

The PlayStation 4 edition of Ys VIII: Lacrimosa of Dana is scheduled to release in Q2 2017 for Europe and North America, with the Japanese version arriving on May 25th.

Retro reflections: On my history with Nintendo handheld consoles

The Nintendo Switch is rushed and deeply flawed, but it’s also a sheer delight to play