Your operating system will fenestrate you the Kingsway

I first cut my teeth on the Windows operating system with its 16-bit version 3.1 — codenamed Janus, after the two-faced Roman god. If you hit a wrong key sequence, windows upon windows would spawn, flooding your screen and leaving me on the verge of tears at the prospect of clearing up that fenestrated mess. Memories of these emotions swam up as I gazed upon GIFs re-enacting this devilish dance on the Adult Swim webpage for Kingsway, a point-and-click RPG by indie developer Andrew Morrish.

I live and breathe RPGs. I happily throw myself into any old or new role-playing mechanic. We RPGers know the importance of keeping well-organised on multiple fronts; in other words, multitasking is second nature to us. But Kingsway may well be one tortured retro experience too far even for me. The UI is your overworld in Kingsway. Inventory? Look in your file folder! Quests? Check your email! Enemies? Watch those pop-up windows! Health Warning: confusion may arise — is this work or play? What’s more, every day is Groundhog Day, randomly generated anew. Kingsway has the potential to turn out the most out-of-left-field, addictive game this summer (winter for us downunder) … or the greatest turn-off since, well, I guess since 1992 and Windows 3.

Kingsway is being developed for PC (a Steam page is up) and the game’s release is projected for this summer. The above announcement trailer introduces you to the features of the Kingsway OS with dulcet tones.

5pb. is bringing the best part of the Konosuba series to life: the panties!

Konosuba is a show that cheekily toys with the usual harem anime trope by saddling its hapless protagonist with women that, according to him, are far from waifu material. Well, the joke’s on ol’ Kazuma; that just leaves more waifus for me.

Anyone who’s watched an episode of the anime or read the manga knows that the prized bounty in the world of Konosuba isn’t up top — it’s panties. Panty shots and panty stealing appear to be the only way that Kazuma can survive the series’ RPG-styled universe, so it’s only appropriate that the teaser trailer’s focus is exactly that.

Picture this in your mind’s eye: you’re hanging out at the inn after a long day of adventuring, and there’s a lone pair of cotton panties atop the bar. Your knees go weak. Your arms are heavy. Which one of your companions is now walking more gingerly? 5pb. invites us to ask that question and many more. Check out the website for the game here.

The Legend of Heroes: Trails of Cold Steel is one of those rare JRPGs where every character is likeable, to the point that even choosing a party of six is difficult. Trails of Cold Steel II dialed that up a notch by making Sara (who is the best, no arguments) a mainstay of the roster, and adding some wonderful guest characters for the first half of the game . Trails of Cold Steel III looks set to take that a step further, with another three members of Class VII: Juna Crawford, Kurt Vander, and Altina Orion. 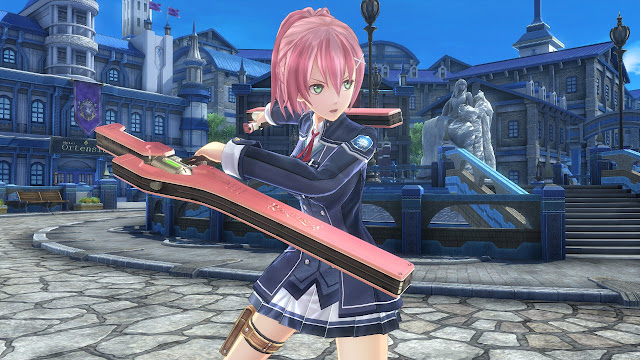 The new characters were revealed in Weekly Famitsu last week. Juna a “lively girl from Crossbell State filled with a sense of justice” who fights with a pair Gun Breakers —which are gun / tonfa hybrids. Kurt is a member of the Vander family, sworn to protect the Imperial family, but has lost his goal in life; he fights with dual swords. Finally, Altina will be familiar to anyone who’s played Trails of Cold Steel II — she’s the Black Rabbit from the Imperial Intelligence Agency.

Famitsu’s article also revealed that Trails of Cold Steel III starts a year and a half after Trails of Cold Steel II, and Rean, having graduated, is now an instructor at the new Thors Military Academy Reaves II Branch School. He’s not going to compare to Sara Valstein as a teacher, but maybe that’s for the best. Meanwhile, I’m going to have to figure out how to fit Juna and Altina into a party that’s already bursting at the seams with wonderful characters.

For a samurai RPG dripping with Sumi-e art style: Tale of Ronin

I watch dozens of game trailers a day, yet Tale of Ronin’s debut trailer stopped me in my tracks and wouldn’t let me go. I watched it again; later a third time. By now I’ve lost count of my viewings. It is composed entirely of shades of earth colour, some stark black and white, and slashes of vivid red, beautiful and savage. It looks as if freshly hand-painted, with ink and soft brushes, on textured paper. It breathes the spirit of the traditional sumi-e art style. It’s a game that wants to bring out the human side of the samurai.

We don’t have much other detail apart from those 1:29 minutes of video. The action looks fast and furious, flourishing katana precision, and seems to proceed in a side-scrolling manner. There is a small, semi-radial menu in the top left corner, showing selections or shortcuts for items and maybe skills. And you can briefly see dialogue options, indicating choice and consequence, at the bottom.

The game is in development by Dead Mage for all PC platforms, PlayStation 4, and Xbox One. I know little about the developer, except that a PC title of theirs is called Shadow Blade: Reload and that they are also working on another PC game by the name of Children of Morta (which actually looks rather cool as well). Like Ronin, they don’t fritter away words as mere embellishment, and all we can glean from their scant published information is that they have an “extreme interest in the Samurai culture”. That much should be evident from the trailer. They did let slip one detail though; they use the Sekai System that creates a persistent world: each time you die, you return to the same world, but as a new ronin with a new story. The release date is a terse TBA. I will wait, with the patience of a samurai.