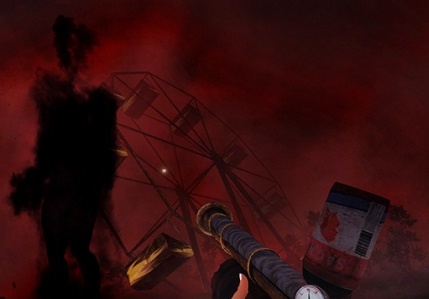 Sylvio, a horror adventure title by Swedish studio Stroboskop, is an odd game. It’s a game built upon the concept of Electronic Voice Phenomena, or EPV, where microphone usage in supposedly haunted places can make recordings which bear hidden messages from spirits. It’s also mechanically one of the strangest horror games I’ve ever played, mixing elements of puzzle, adventure, open world and shooting into its short runtime. And somehow it all still works. First released for PC in 2015, Sylvio is seeing a release for the PS4 before the studio settles down to work on the game’s sequel.

Related reading: Another horror game that has flown under the radar and is really worth looking into is The Park. Matt C’s review here.

Sylvio is by and large a game about finding things. The protagonist spends the game walking through the empty expanse of Saginaw, an abandoned park buried under a landslide, and the claustrophobic corridors of bizarre locations searching for messages left by otherworldly beings, which she records with a microphone and deciphers with a tape recorder. This recorder is perhaps one of my favourite game mechanics of recent times – allowing the player to manipulate a sound clip, whether by reversing it or adjusting its speed, in order to discover the hidden message behind a wall of radio static. It’s an elegantly simple concept which draws the player into the world of ghost hunting, and breathes life into the game as you walk through its many locales.

The protagonist’s pensive wandering through hazy corridors is occasionally broken up by some puzzle and platforming segments. While it’s possible to argue that these are tonally inconsistent with the ghost story theme, I quite like the inventiveness of the puzzles and they drive home the game’s fantasy of finding meaning in the cryptic and surreal. Platforming can be frustrating as the game is first person, and your vision is limited to the scope of your flashlight, but it allows the level designs to be more vertical and the locales feel more spatially dense as a result. 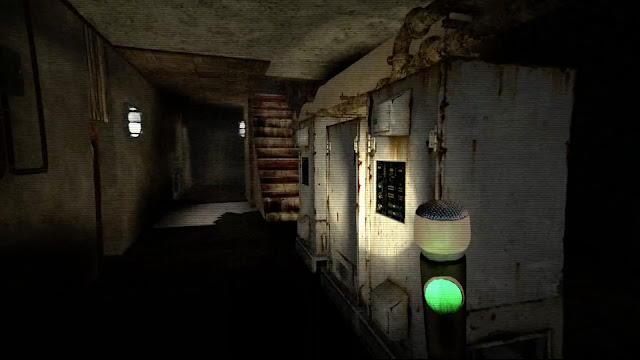 As for the scare factor, I didn’t find myself too frightened through the game’s running time, but I was still immensely satisfied with the game’s tone. Stroboskop uses jump scares very sparingly, but also to great effect: they tend to occur while the player is searching for something important. Sylvio bears a recurring motif of searching for one thing only to find something else, and the designers create a fearful mood through the reversal of player expectations. There’s nothing about the enemy designs which are particularly scary (they are mostly featureless black shadows) but the timing of their appearance alone is enough to make the player jolt. The sound design also goes to great lengths to make the player uneasy, especially in the message decoding segments as most people will be naturally unsettled by the sound of speech played backwards. The result is a horror game which won’t leave you screaming, but will leave a lasting, chilling impression on most players.

Sylvio’s porting to PS4 is a solid job, with the game’s feel left intact. I did have my initial gripes with the control scheme, partially owing to the game’s insistence on having three different inventories (for your tools, your collectibles and your spirit recorder). The graphics do take a slight dip, particularly the graphical distortions which on PC command the player’s attention whenever an apparition is around, but were barely noticeable on PS4 until the spirit is right on top of you. One positive that the PS4 version boasts is the controller’s speaker – the sounds of the spirit recorder come right out of that speaker and you can feel it in your hands, allowing the experience to be a little more immersive.

The game’s main pitfall is some questionable level design choices. The levels are neither the streamlined, choreographed designs employed by games like SOMA, nor are they the expansive locales ripe for exploration and hidden secrets as seen in games like The Evil Within. Sylvio’s levels task the player with finding a key, so they can open a specific door, so they find another key which can open a door somewhere else in the level, with occasional ghost signals along the way. The result is an overall mixed experience – sometimes the player will retrieve a key item and know exactly where to go, at other times it’s a futile hunt for a door which is frustratingly hidden. A few times, the correct path was a direction which a player’s eyes aren’t drawn to while they are exploring naturally – a small issue, but one which will frustrate players who don’t habitually probe every nook and cranny. 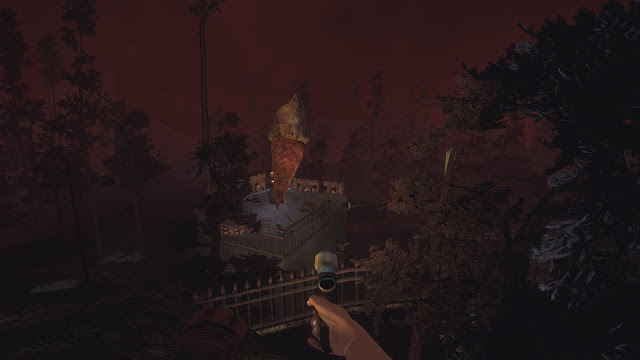 Sylvio also features an overworld, on which the player can drive a car and search for collectibles, as well as entrances to future levels. This world is unfortunately quite sparsely decorated, with nothing but red trees and the odd abandoned house for the player to explore. Between whispers on your recording device and fragments of piano sheet music, there’s a lot to collect in Sylvio but finding it all is a chore not many players will be willing to undertake. I did, however, very much appreciate how the driving segments slow down gameplay and allow the player to think and reflect about the previous level before being thrust into the next.

One positive of the levels is that there’s often a rich through-line of environmental storytelling embedded into the player’s path. Due to the game’s theme that each apparition has a story to tell, each location you visit also has its own narrative which you can piece together by exploring. The game is broken up into a series of interconnected levels revolving around a centralised big puzzle, and each one of these levels corresponds to an individual’s psyche. At the end of each level, the player may start a séance to further interact with the level’s ghost. In a way, each level is a character, and exploring the setting is listening to the unresolved matters behind the death of the resident ghost. After a few hours, I found something which I didn’t know I was searching for: intimacy.

It’s been a while since I’ve played through a proper horror game and became so invested in the “villains” of the tale. The team at Stroboskop was determined to take an inventive, artistic look at the culture of ghost hunting and go to great lengths to highlight the experience of using EPV technology. Of course, the game’s individual parts are rusty and don’t play as smoothly as I would have liked, but Sylvio manages to conjure some incredible moments with its humble mechanics – fans of Project Zero or Deadly Premonition will know what I mean. The narrative can be minimalistic and obtuse, but I had a great time trying to piece together meaning while finding more and more clues. It is my hope that horror aficionados stumble upon Sylvio searching for a high octane frightfest, but instead finding a superb meditation on mortality and our own relationship with the dead.