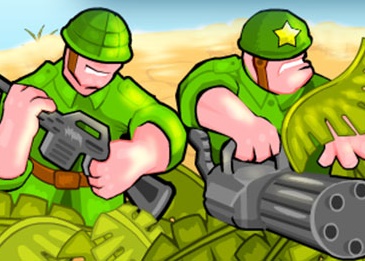 There are some games that play brilliantly regardless of the platform they’re released on. Star Wars: Knights of the Old Republic is as good on mobile as it ever was on PC. Mini Metro likewise. XCOM works as well on PC and console as it does mobile. And then there’s Battalion Commander, which might have been passably fun on mobile, but plays like trash on console.

And this is bizarre, because Battalion Commander isn’t even a game that’s been released on iOS or Android, but plays like the developers forgot what platform they were developing for. This was originally one of those free-to-play Flash games on the online gaming services, and it perhaps should have stayed there.

It’s a vertically-scrolling shooter. These can be a great deal of fun; think of the classic Ikari Warriors, which was a great deal of fun because it gave complete control to the person playing the game and then challenged them to take on some intensely difficult levels. Battalion Commander inexplicably decides to take all control away aside from the left thumb-stick.


The battalion commander in question can be moved around, but he’ll just keep on firing even when there’s nothing there, looking like a complete imbecile in the process. It honestly feels like the development team completely and utterly forgot that controllers have buttons, and were testing with some sort of 1970s tracking ball that didn’t. There is some slight variety to the action whenever the commander rescues a squad member on his mission, as the squad member immediately joins the fight and adds additional firepower, but that’s pretty much it.

The game does get difficult as time progresses, but even there the developers have struggled to balance the systems, and what we have instead makes easy work out of game, and kills the remote challenge that gave it whatever appeal it might ever have. The commander starts out only being able to recruit riflemen with similar firepower to himself, before gaining the skill to save Grenadiers, vehicles, flamethrowers and more. Unlocking these requires earning XP and money in a similar fashion to unlocking stuff in a mobile game. The XP raises the commander to the next level, unlocking the ability to purchase some upgrades. The issue is, by the time enough XP is earned, there’s more than enough money to just buy everything anyway, completely losing the point of having those dual monetisation systems.

The art direction does a decent job of showcasing everything that is going on, and there’s nothing wrong with any of the collision detection which is a playability accomplishment. The cartoon-like approach is also clear enough that you won’t wind up confused about what is being shot by your men as opposed to the stuff flying around the screen. That being said, there are times where the squad of men cannot possibly avoid being hit, and the commander will lose men along the way. I’m not a fan of challenge being arbitrary like that. I don’t think anyone is. 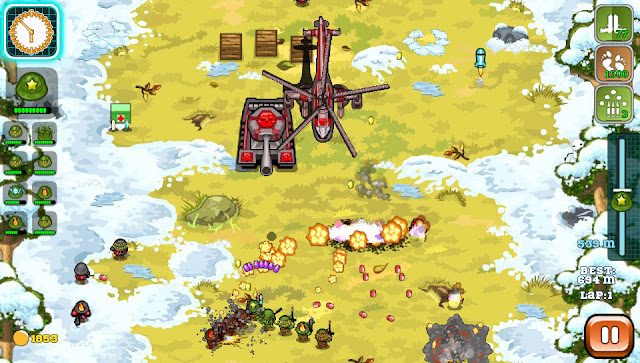 Another aspect that makes the game feel like it was made for mobile devices is the fact that the game has a giant button with “RATE” written on it, taking up as much real estate on the main title screen as the “play” and “options” buttons. This kind of begging for thumbs up is, of course, common in mobile gaming, but hardly something that people looking for immersive console experiences appreciate. In the end I was glad that the button was there, as the “RATE” button took me to the PlayStation Store, and I saw some games that were on sale and purchased them, and then I had fun. But I don’t think that was the intention here.

The unfortunate thing about Battalion Commander is that if it was one of those free-to-play mobile games, I’d probably have fun with it I could see some others even enjoying it enough to toss it a couple of coins in support. Sitting on trains or in doctor’s waiting rooms, or standing in queues, I often go to my phone to keep me occupied and this kind of game would have fit the bill perfectly. But if I am to sit in front of my PlayStation 4, I’m not going to want to play something that requires minimal effort, no narrative and five minutes of my time. Simple as that.