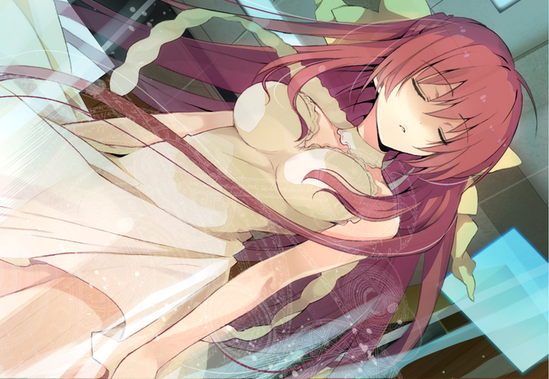 Suicide is something that’s not often explored in video games. Fair enough – it’s a tricky subject in any medium, let alone an interactive one. It needs a great deal of care. Getting it right is a difficult task, and there’s a lot of room for things to go wrong,

That hasn’t phased Takahashi Wataru, the founder of the Japanese indie game circle Liz Arts. Wataru’s first game, Risette’s Prescription, was a harrowing story of child abuse, self-harm, suicide, and grief. In the space of a couple of hours, it explored these difficult themes in a way that was blunt, but also careful, thoughtful, even cute and endearing. It’s a game that will shatter your heart into pieces, and then build it up again, piece by piece.

Memory’s Dogma is a much more elaborate and polished game than Risette’s Prescription. In terms of sheer length, there’s a good ten hours here (depending on your reading speed), and this is only the first episode. There’s an intricate sci-fi thriller plot that’s a framework for the more serious aspects of the game, and a reasonably captivating tale in its own right. The production values are through the roof this time around, with some phenomenal artwork and a stunning soundtrack 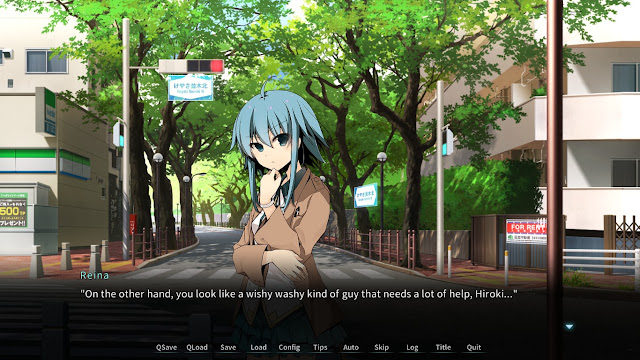 On paper, Memory’s Dogma is a completely different game, but it shares a lot with Risette’s Prescription. For all its sci-fi trappings and mysterious plot trajectories, it’s fundamentally a game about depression, suicide, and grief. Like Liz Arts’ previous work, it’s candid – almost comically blunt, at times – but it’s also careful and considered in its approach. As someone who lives with depression, and who’s thought seriously about suicide in the past (though it’s not something I’ve ever attempted), Memory’s Dogma hit real close to home for me.

The very first scene opens with Kusuhara Hiroki (you) waking up in hospital, dazed and confused, with his hands and forearms wrapped in bandages. “Cutting your wrists is the least guaranteed way of killing yourself. I thought I told you this last time,” chimes in Hiroki’s friend, Kakeru. His devil-may-care attitude to something so serious is astonishing at first, but it cleverly sets up the dynamics of the friendship. Kakeru cares, otherwise he wouldn’t be there. They’re close enough, and it’s something that’s happened often enough, that they can joke about something like this.

The reason for the suicide attempts soon becomes apparent: a few weeks prior, Hiroki’s best friend, Mizunashi Sorano, died. He’s understandably stricken with grief, and that’s manifested in a deep depression and suicidal impulses. As Hiroki himself describes it, there are times when he feels like Sorano is “calling out” to him, and the only way for him to join her is to go to the same place she’s gone. 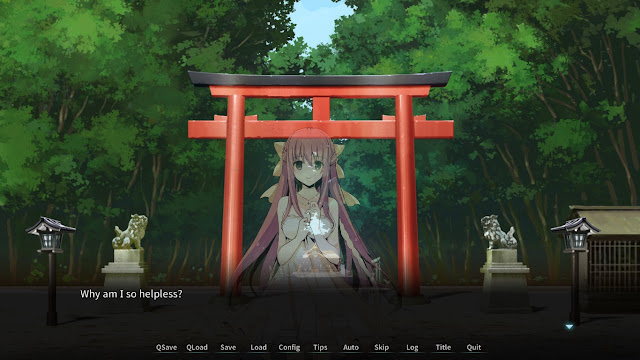 What really struck me (though wasn’t too surprising, after Risette’s Prescription) was just how authentically Memory’s Dogma captures what it can be like to be depressed and suicidal. If it’s not something you’ve experienced it can be hard to understand, but being depressed typically doesn’t involve being really, really sad. There are moments of that sure, but in my experience, the day-to-day of living with depression is emptiness, more than anything else. It’s hard to feel anything, good or bad, which makes it hard to care.

This is something that Memory’s Dogma captures really well through Hiroki. He can be a bit of a debbie downer at times, but he’s generally quite congenial and friendly in his interactions with other people. However, because he’s the character you play as, you’re also privy to his thoughts, and you can see how much of a struggle it is for him just to go through the motions of being alive.

Similarly, thoughts of suicide aren’t necessarily the result of overwhelming sadness. Everyone’s experience will be different of course, but for me (and, anecdotally, for a lot of other people) it’s not so much about wanting to die as it is about not seeing the point of being alive. Hiroki is much the same. He isn’t looking for a way to die, he just doesn’t really care whether or not he lives. He has his suicide attempts, but they’re from a place of wanting to see Sorano and feeling like she’s calling to him; dying is just a means to that end. 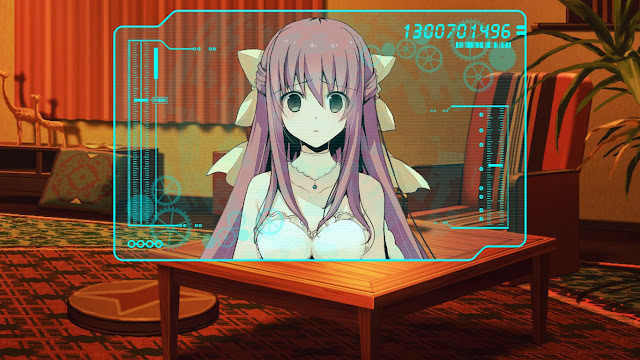 The irony in all this is that there’s a clear-cut way for Hiroki to meet Sorano again, without killing himself. In near-future setting of Memory’s Dogma, memories of deceased people are digitised, stored, and used to re-create their personality in a holographic form. These memories are stored at Connect Centres for 49 days, giving friends and family a last chance to say their goodbyes. Sorano is digitised in just the same way, but Hiroki can’t bring himself to actually visit. Depression has a way of obscuring helpful interventions and become its own self-fulfilling prophecy. (There is also the question of the “realness” of a digital re-creation of someone’s personality, but that isn’t something that the game explores in any great depth.)

So Memory’s Dogma does an impressive job of capturing those little nuances of being depressed and suicidal. Importantly, it also puts attention on the other side of the coin: the impact it has on other people. Anyone with friends or family who are depressed will know that we can be difficult people to be around.

There’s a really powerful moment midway through the game where Hiroki volunteers himself for a dangerous job, saying he’s best suited for it because he doesn’t care if he dies. It’s a seemingly practical suggestion, and not an unusual comment from Hiroki at that point, but this time it results in his recently-met friend Reina getting really, really angry at him. 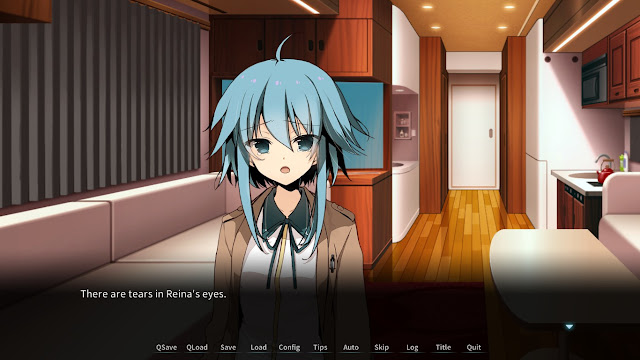 You see, Reina had saved Hiroki’s life not long before that. She’d put her own life at risk to do so, and here’s Hiroki just casually talking about not caring if he lives or dies. It’s ungrateful, at the least, but the more important factor here is that even though Hiroki doesn’t value his own life, he’s clearly worthy in the eyes of others. His friends care about him, whether they’ve known him for years or just met him a few days earlier.

Later developments show just how much Kakeru has given up to be a point of support for Hiroki. He’s good at keeping it under wraps, but Kakeru is under a whole lot of stress from looking after Hiroki through his repeated suicide attempts. He does it because he cares, and he hides it because he doesn’t want to make things even worse for Hiroki, but it’s a huge strain on Kakeru nonetheless.

The important thing here is that even though everyone is their own person, they’re also someone to everyone else around them. It seems an obvious thing, but when you’re depressed it can be really hard to see just how much you affect other people. It can be hard to see how much your death would impact the people who care about you, but they really do care. 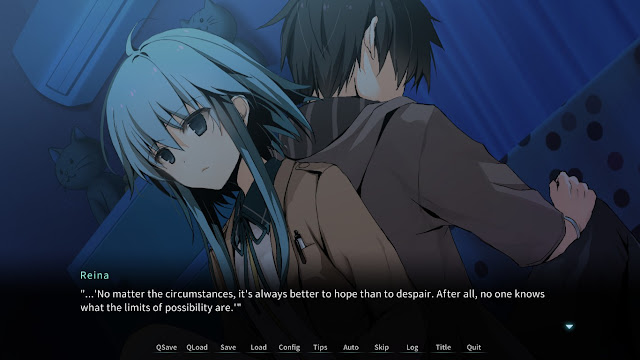 As such, much of the latter part of Memory’s Dogma is about Hiroki’s journey to understand this, and to do right by the people who love him by trying to get his depression under control. It’s not the most original of character arcs, but it feels genuine. The way Hiroki’s relationships with those around him grow over the course of the game is beautiful, with plenty of funny, sweet, and dramatic moments.

Of course, there’s a lot more to Memory’s Dogma, too. There’s a sci-fi thriller about digitised memories and genetic superpowers, and there are magical girls and happy-go-lucky cops. What underpins all of that, though, are themes of depression, grief, and suicide, and they’re approached with a powerful, thought-provoking authenticity that few games can match.

The 24 games of Christmas! Game #8: Pokemon Sun and Moon