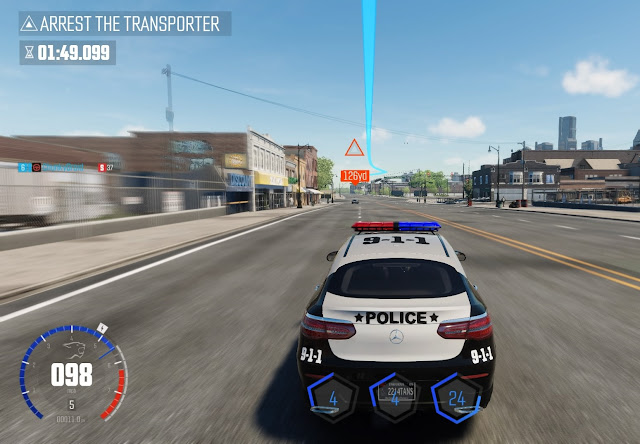 Ubisoft’s The Crew has had a bumpy ride over the past couple of years. Its open world semi-MMO approach has had many fans and many detractors. Overall, The Crew has been decent at what it does but never seemed to reach the heights of its potential. Ubisoft has now tried to remedy this by throwing more content at players with the release of the expansion pack Calling All Units.

Related reading: Nick’s review of the original release of The Crew.

Calling All Units is about taking on the persona of the other side of the law; the police. The add-on offers a few flashy police cars to get the job done, all of which are equipped with nifty gadgets such as EMP shocks to stop the criminals in their tracks. It adds enough to make the game interesting again with a few extra play modes, but does not do much of anything else.

In order to familiarise players with the new game modes, Calling All Units shoehorns in some extra story missions featuring a new protagonist, Clara. Clara is attempting to take down a bunch of Street Racers who call themselves The Harvesters, and takes on a variety of missions to do so. The first mission requires that she chase down Alex, the main character of the actual game, to test out her weapons and to see how well she handles the vehicle she’s given. It seemed a little jarring to the character of Alex when I chased him down in a matter of seconds, being that he’s supposed to be one of the best street racers of all time, but it did teach me how to use the weapons available, so there is that.


Apart from the traditionally terrible story, the point of Calling All Units is to have a good time with a crew online. You are able to invite a crew to join you in a chase, or you can be invited into one simply enough. The feel of having a number of people chasing you down online is thrilling, and made me wish I was a tad better at the game itself. Equally as thrilling is being part of a group of police cars working together to chase down a target. It does feel really fun to just be a part of something like this as the rubber-band AI gets old very quickly.

With the game needing to be always online comes with its own set of problems. I was invited into a game of chase which I willingly obliged. After completing the game, the game accessed the servers and dumped me on top of a mountain and demanded that I compete in a set of extreme events, rather than drop me off where I was originally, on the way to a story mission. While I could fix it by fast-travelling near the location of the story mission, it was nonetheless needlessly tedious. Another problem involved me joining a chase, only for it to immediately commend me for my incredible chasing ability and saying that I won, have some free XP and bonuses. In the name of balance, the next game I joined, I was scolded for my terrible ability to chase others, told me I lost and had the failure that I had no part in added to my permanent record.

Calling All Units doesn’t set out to do anything new, it’s pretty much an online only version of Need for Speed: Pursuit. The new mechanics of chasing down others online with a group of others is indeed fun, and for the most part the online does work. The story does nothing exciting whatsoever, but it does teach the new mechanics and how they work. Fans of The Crew will likely get something out of this, but it’s not nearly enough to turn The Crew into an essential game, either.