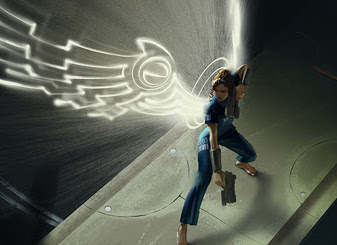 From the beginning, Seraph by Dreadbit games is a different kind of platforming experience. Being put in control of an angel is nothing new, but Dreadbit takes a different approach by creating a hybrid partnership in which both you and an AI will work together as one. Put into the role of an angelic being known as Seraph, you will be controlling her movements and pulling the trigger against demon hordes while the AI will take care of the aiming.

From a gameplay standpoint alone Seraph stands out amongst the competition with its unique design. Supporting this gameplay uniqueness is that it also doesn’t follow standard conventions to the angels-and-demons approach. Most fiction has these two factions at war with one another in varieties of different times and spaces. While this part is still at the core and par for the course, in Seraph’s word demons cannot make it to the human realm without the aid of an angel.

Waking up from inside of a pod inside of her manmade prison, Seraph not only discovers that the guards meant to keep her in are dead, but that she was the source of the demon incursion. Picking up the weapons of her now dead guards, she heads out to the rest of her prison to destroy the demons and take her powers back in order to finally leave the human realm and head back home to her own. 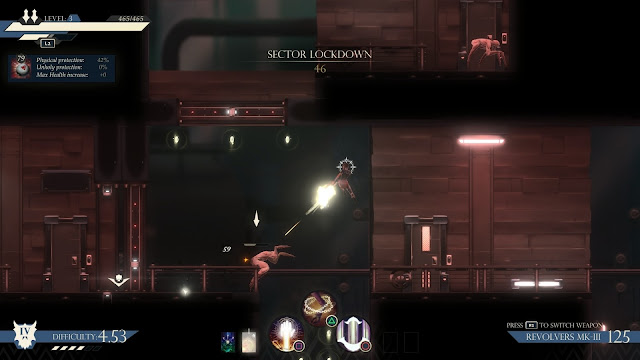 Getting comfortable with those weapons that Seraph picks up is important because not only are they the main weapons with unlimited ammo, they are also at the core of the gameplay design. As a player you have two main responsibilities. The first is to move around the stage in search of the next objective. The second is to pull the trigger.

While these two ideas are rather simple, the journey will be anything but. Between the entrance and the exit to every stage Seraph will need to run, jump, shoot and teleport her way through hordes of demons. Movement itself is rather graceful and the ability to teleport through angelic powers makes what would normally be impossible actions nothing more than an afterthought. The stage designs keep this aspect in mind and, unlike in a Metroidvania, Seraph can access just about everything from the outset. The only things that are not available and will need to be obtained are passive abilities and weapon upgrades for combat allowing for even more effectiveness in battle; something you’ll need as the difficulty does escalate.

Seraph’s AI that controls the aiming is an absolute marvel and works flawlessly. Announced back in March, I honestly wasn’t sure if it would be able to be as smooth as promised or work as well as intended. It does. When moving through enemies Seraph adjusts her aim to make the most out of any given situation and the only time she will miss is because you moved her to where the enemy now has cover of a ledge or of a floor. Having two weapons makes this even more interesting as she can target two separate enemies as you move around. If there are three or more enemies then a quick flick of the right joystick can adjust her aim to an enemy in particular to dispatch them quicker. 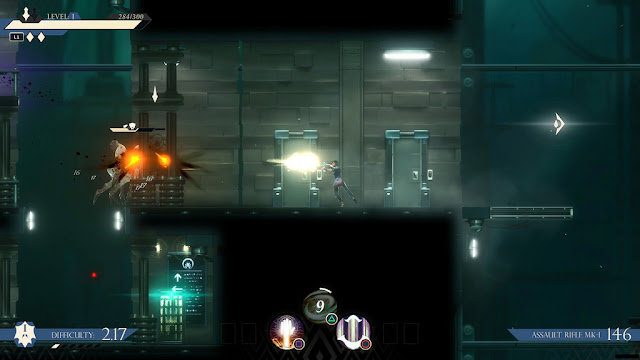 Having the AI control the aiming sounds like it could make the game too easy but it is anything but. Not allowing players to control where to aim has allowed for Dreadbit to up the challenge when it comes to moving around. Aiding the uniqueness that is being presented is an evolving difficulty that increases as you the player get better. As the demons are slain and Seraph re-absorbs her powers, there’s a shift that comes into play. Re-obtaining her powers is akin to experience and when she levels up, Seraph can choose from a variety of abilities in order to facilitate her battle. At the same time, as more and more demons are dispatched her remaining power unlocks become less frequent, making the demons themselves more of a threat.

With an evolving difficulty level there was one last interesting design concept and it is that visually, enemy design is limited. Generally this can seem to be a lack of effort however in this particular case, it is anything but. As enemies become stronger, they don’t simply gain more hit points or armour and hit harder. As enemies become stronger they look the same, but their movement patterns change, they obtain new abilities, they act in different manners. In short, you won’t actually know what challenge the enemy offers until you start fighting it. Each of the base designs will give you a vague understanding of the enemy, but then having a new attack routine come at you because that difficulty counter ticked past a certain point is certainly thrilling, and will keep you on your toes from start to finish.

Seraph on a whole is brilliant and refreshing in its design. Having the player be able to concentrate on movement while the AI handles the aiming is an inspired idea and I honestly hope to see more of in the future, while the organic approach to difficulty and movement makes for a game that is mesmerising and deeply engaging from start to finish.