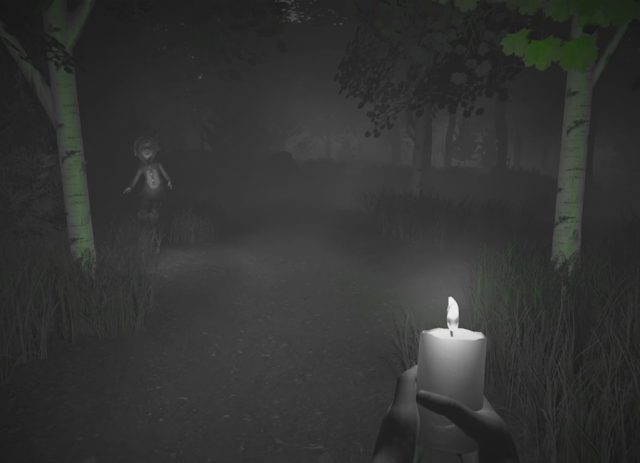 Wick, by Hellbent Games, is a horror game for a new age.

The story goes that there is an old urban legend, a campfire game for teens designed to scare the pants off those silly enough to actually try it. The victim is placed alone in the forest – in this case an abandoned summer camp – and given a few candles with which to last the night. As a premise, it’s straight out of the same realm of urban legendry that spawned countless B-grade found-footage horror films, and Wick is the embodiment of that particular sub-genre. As voiceless, faceless, blank-slate Sam, you are tasked with surviving from midnight to dawn on candles alone. All the while, ghosts of children try to prevent you from surviving. Because of course there’s ghosts of creepy children in the abandoned summer camp.

What this translates to is a first person game where you have to wander through a half-dozen chapters set in the exact same map looking for candles that do little at all while running in the opposite direction of whatever randomly generated ghost appears in front of you at the time and maybe stumble across lost items that a dead kid might have used at some point while you’re at it.

Every chapter is framed as an hour between 12am and 6am. You start facing a lit candle and a handful of matches in your inventory, and from there you have to survive the hour. I say “hour”, but each hour chapter only lasts for eight minutes all up, and is entirely self-contained. Each hour contains a specific mix of ghosts, and three non-randomised items to collect if you want to access the skeleton backstory and reach the final chapter. Every hour is set on the exact same map every time, effectively making each chapter a slight remix of the one before it – a decision that does not add to the longevity of the game at all.

A handful of candles are scattered around the map each hour, their location determined entirely by randomisation. Candle placement is signalled by a glimmer in the distance, unreliably marking the way to the next minute-and-a-half of light. Placement is sometimes friendly, frequently hostile, with the randomisation occasionally doing really annoying things like placing four candles in the space of a 30 second walk while abandoning the rest of the map. Apparently holding a lit candle reduces the aggressiveness of the appearing ghosts or something. I never really noticed a difference. But hey, being able to see the environment around me helped get lost fewer times.

Which is a big problem in Wick. While you may eventually get to know your bearings playing the same map over and over again, the muddle of trees and bumpy ground and distance between clear landmarks makes it very difficult to navigate without getting totally lost. I suppose that’s part of what Hellbent Games was going for, but as a side effect I never experienced a sense of location. There were trees. And dirt. And a graveyard and a bus and a bridge and a shed somewhere that I might eventually stumble across maybe. And had I been in this direction and collected the candles before? Wick misses the very careful balance between familiarity and disorientation, skewing way too heavily to the infuriating muddle of complete lack of spatial identity. 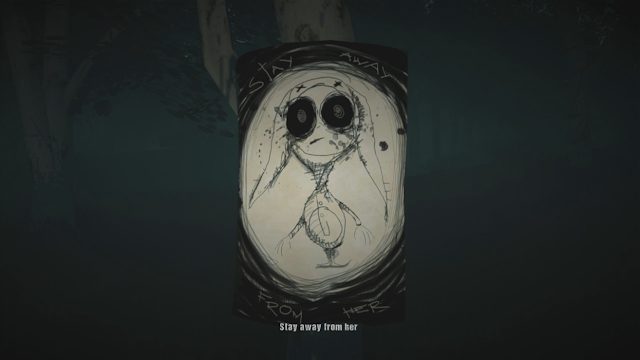 The aforementioned collectable items – a broken mask, a lost shoe, a rusted leg brace and the like – appear in a fixed location each hour, and disappear forever once collected. Each pickup triggers a short soundbite, designed to reveal some kind of backstory of tragedy and abuse or whatever, and they can be passingly interesting, but lack real substance. Below-par voice acting induces eye-rolling moments as an overacted priest expounds the terrors of abandoning religion, or a little girl chants a mangled nursery rhyme. Collected items are viewable later with a slightly more expanded caption in a menu between chapters, but it’s hardly a fulfilling backstory.

Again, the randomisation is your actual worst enemy here, as sometimes a number of ghosts can spawn in sequence, causing you to run away from one and straight into the field of another. This, of course, results in death, and having to start your eight minutes again from the start. 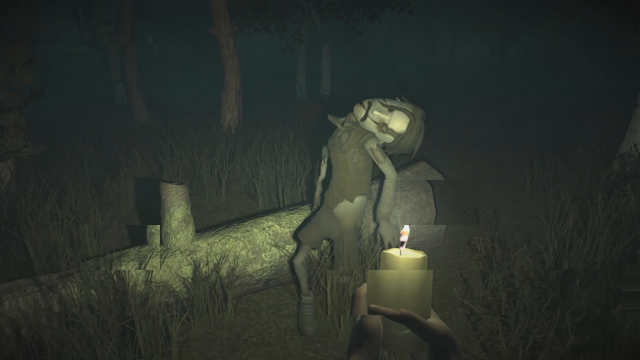 What makes it even more frustrating is the inherent unwieldiness of the controls. While it may have worked wonderfully on PC, where a mouse allows you to do a very rapid about-face when presented with the particular type of abrupt apparitioning on display, the PS4 controller adds a frustrating and fatal slowness to turning. There is no snappiness available on the PS4’s sticks, making that necessary 180 degree turn when a ghost pops up in front of you way too slow. Even with the in-game sensitivity turned up to max, turning is just too slow to make escape a certainty and, instead of being scary, it meant ghost encounters too often ended in frustrating, controller-induced death – and having to start the eight minutes all over again.

There are a few semi-random events that add a little flavour – some involving a location’s history such as the ruined cottage’s house fire, some involving the ghosts such as being chased through the school bus by Tim. It doesn’t take long to collect them all, however. More startling are the truly random moments intent on invoking the hallowed jump scare. Sometimes children will run across your vision or flash in your face disappearing immediately, accompanied by a sharp violin screech or static burst. While harmless, their abruptness can stimulate that base horror reflex of shocked reactivity. More creepy, but no more subtle, are the times when your candle will be blown out with a giggle, or you’ll black out and be teleported somewhere random. Cliched scare moments like this are rare enough to be fresh and unexpected, but not so rare that you won’t see several of them each chapter. As a horror battering ram, it works. As a complex and intelligent builder of atmosphere, it’s less effective.

Thankfully, Wick comes with the free content update that was also delivered to the PC version. The No Way Out scenario adds a handful of well-hidden collectables in the earliest stages which, once found, unlocks another chapter set a year previous. As internet personality and urban legend ‘tuber “TBubber”, you visit a brand new (tiny) area of the summer camp (for a minute) before being tasked with retrieving six items to place on the children’s graves. The difficulty ramps up here, with ghosts more aggressive and fewer candles than before. It also adds three or four new locational encounters. TBubber is a voiced protagonist too, and will often offer his thoughts on stumbling in the dark and running into trees. While TBubber is annoying, this allows for some much needed personality and characterisation to occur, even offering a glimpse of a backstory about a rift between YouTube partners and the regret that ensues. No Way Out is a pleasantly refreshing remix of the original scenario, but not one that will hold your attention for very long. 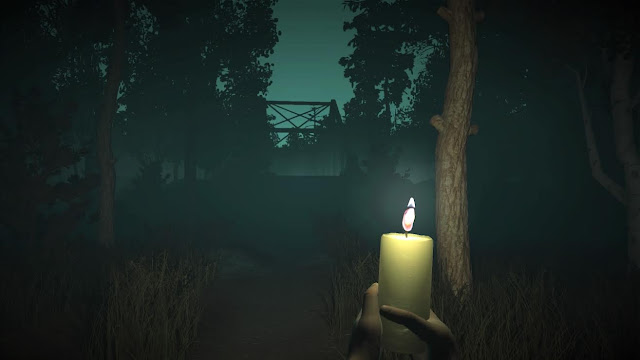 Wick unashamedly targets a very specific audience – namely streamers. Random jump scares able to be overreacted to on camera. The minimal space in game for actual lore, instead implementing fragments that streamers can add their own take – and thus insert their own identity – to. Short sequences that can fill out a half-hour or hour timeslot without requiring actual introduction. It all reveals an ethos of streamer-accessibility, and it fills its niche well. I can imagine that it would be enjoyable to watch a streamer you like play, but it’s not actually enjoyable to play.

Related reading: For a horror game that does atmosphere incredibly well, you can’t look past Here They Lie on PlayStation VR. Matt’s full review.

If you want cheap jump scares, Wick will do the job. If you’re after a more nuanced approach, one that goes beyond the superficial horror of sudden apparitions accompanied by heavy breathing, identical music, and a handful of different shaped insta-kill radii, then Wick is not for you. Wick is a blunt instrument – one designed not for players, but for observers of players. Aside from the occasional sudden jump caused by an inattentive ear, there is little of that creepy unease, that apprehensive discomfort, to elevate the overall horror experience.