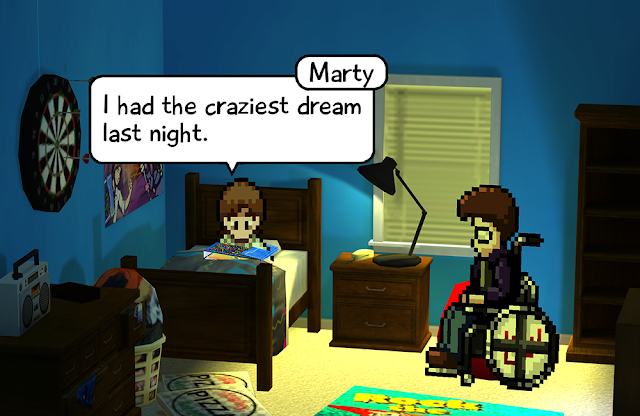 I am one lucky girl: it seems as though much of what I love from my childhood in the late ’80s and ’90s is coming back with gusto. Tamagotchis, Lisa Frank stationary sets, Ghostbusters, Ninja Turtles… these have all had a reboot in recent memory, and it’s only a small sampling of everything old that is becoming new once more. Enter Saturday Morning RPG, a game that has made its rounds from starting with iOS several years ago and ending here at current-gen consoles. The game takes all that was great about Saturday morning cartoons and mashes it together with JRPG elements, creating something that is all kinds of wonderful.

Saturday Morning RPG borrows its episodic structure from the same television genre named in the game’s title. Each episode takes approximately an hour to play through to 100 per cent completion, making it a perfect weekend morning activity without sucking up the entire day — after all, in the ‘80s kids actually went outside to play for a portion of the day. Every inch of the game oozes respect for its namesake era, from the Trapper Keeper that plays an integral part in both the story and the interface to the scratch-n-sniff stickers that give the player bonuses in battle. This was also the era when myself and many others became acquainted with in-home game systems for the first time, and as a result longer narrative games such as JRPGs became the norm versus arcade games where the point was to get to the highest level with the most points. The inclusion of so much inspiration could easily cause the game to feel weighed down or gimmicky, but Saturday Morning RPG is a downright pleasure to play; I actually had a big smile on my face most of the time.

I’d like to return to my previous mention of the Trapper Keeper, as it plays such an integral part in the game. For those unfamiliar, a Trapper Keeper was an often-replicated (or at least attempted — my personal favourite version was the Note Tote of the ‘90s) binder with sliding plastic rings instead of snap-closing metal rings, pockets, folders, and a wraparound flap with a velcro closure. It kept everything in place even for the most untidy of folk. In Saturday Morning RPG, the entire story revolves around the Trapper Keeper-esque binder that our hero Marty acquires. It gives him magical powers (who doesn’t want that?!) and allows him to use objects found in his daily life against his newfound mortal enemy, a group that goes by the name of HOOD. The binder and powers come to him in a dream, of course, but then transfer to his daily life and usual hangouts. 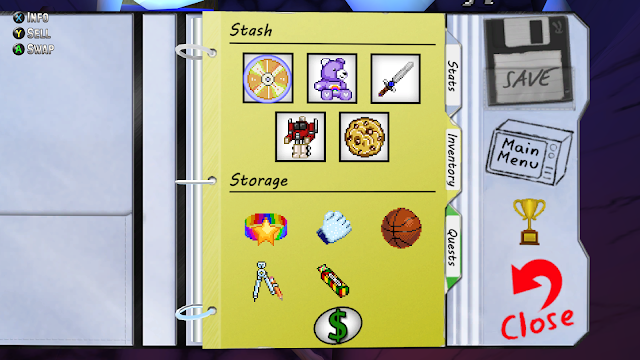 The binder is not only the source of Marty’s power, it is also where the player controls everything in the game. Look at the binder’s cover to select which scratch-n-sniff stickers will be the most helpful, or open the flap to reveal the save option (represented by a floppy disk) and tabs for stats, inventory (further broken down into the on-hand stash and stored items), and quests. The quests tab is perhaps the most important as it is what guides Marty through the story while also giving him the chance to explore via side-quests. Main quests come automatically and take the player from the designated start to finish points of the chapter; side-quests, however, must be found by talking to characters that aren’t essential for the main quest. Side-quests are the best part of each episode because they allow Marty to explore the current map with much more detail, such as when he helps two shy high school students fall in love by bringing notes back and forth between them. After all, this was long before text messaging; I can’t be the only one remembering folding notes into fancy squares to pass them to friends between classes, and this quest made me feel particularly nostalgic.

Battles, as are everything else in this game, are nostalgia-driven to the core. The game’s heavy JRPG inspiration is obvious in battles, with a familiar turn-base battle system reliant on HP, MP, physical attacks, spells, and items. It is here that scratch-n-sniff stickers finally get the importance they deserved back in the day: the stickers give your player bonuses such as extra HP or an attack stat increase, but you’ll need to “scratch” them fast enough by wagging a joystick back and forth. There are only select stickers available to keep on your binder, so choose wisely. Some bonuses look tempting because they provide such a sharp increase in a certain stat but those are often the ones quite difficult to scratch off in the limited time allotted. As such, sticker organization becomes a delicate balancing act; only the best should be given prominence on your binder. Marty’s stash also becomes relevant during battles as the items he has found become weapons to be used against the enemy. My absolute, hands-down, irrefutable favourite is the Carebear that gives Marty the ability to beam rainbows out of his belly and directly at his enemies. Top that all off with often familiar enemies, and the battles altogether become a love story to the past. Some are difficult, sure, but what true player would feel completely satisfied finishing an easy game?

Related reading: Another game that relies heavily on nostalgia, World of Final Fantasy, is also a must-play.

In a way, Saturday Morning RPG is even more retro than its theme would suggest: it was retro when originally released back in 2012, and now its double the retro with ports to current generation consoles. Retro squared? Regardless of how much I can say retro in this paragraph, the word truly does represent the heart and soul of Saturday Morning RPG. At one point above I described battles as a “love story to the past,” and that statement is at the core of all that Saturday Morning RPG is.