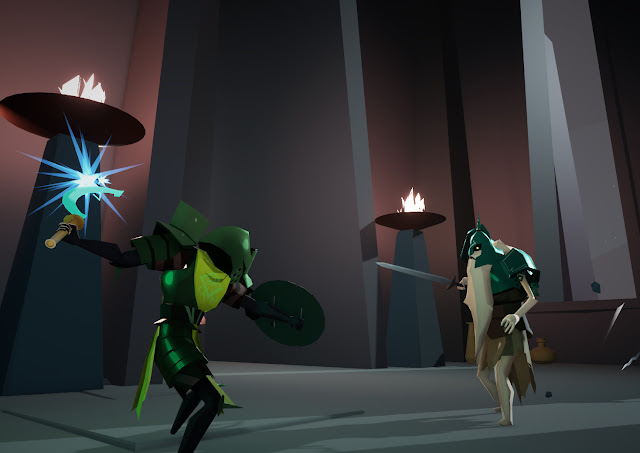 Ever since Dark Souls landed on the scene, people have loved calling any game with a high difficulty curve that demanded patience and practice “the Dark Souls of XXXX”. The “Dark Souls of shooters”, the “Dark Souls of rhythm games,” and so on and so forth; it’s quite silly, but it’s an effective way of creating an immediate impression on the audience nonetheless.

Related reading: Dark Souls is the obvious inspiration for this game. Click on for Matt’s review of the  third game in the series.

So I’ll throw another one in there: Necropolis is the Dark Souls of action roguelikes. The difference is that unlike some of the other games that are billed as “Dark Souls-like”, Necropolis doesn’t just deserve that comparison because it’s a challenging, unforgiving game. The ambience and atmosphere, narrative structures and basic gameplay will also be very familiar to Souls veterans. Aside from the aesthetic and more traditional co-op gameplay than Dark Souls’ white-and-red souls summoning system, it would be easy after playing this to assume that From Software was actually involved in the production of it.

Necropolis loves being as obtuse as From Software in its storytelling. You’ll take control of a hero – a formless, faceless character who looks like he or she is the dark twin to Journey’s hero. There’s no personality, no identifying characteristics, and indeed you’re not even going to give him or her a name. Playing in co-operative, there’ll be a small group of these characters working together, but aside from the user’s screen name floating on the top of their heads, you’re not going to be able to tell one from another.

This sword is awesome. Takes down enemies by the horde. #PS4share https://t.co/lj8GJREmA2 pic.twitter.com/r1e6FQMd2v

This is deliberate, because the characters will be dying a whole lot. As with other roguelikes, levels are randomised (and sometimes incredibly dull as a result), and each failure, resulting in the character’s death, will set a new dungeon to explore. The character will also be tossed back in with all their favourite equipment gone. There aren’t experience levels in Necropolis, so the loot is so critical to overcoming its more difficult challenges. Playing well will earn some permanent bonuses in “Tokens,” which can be used to power up the character in a variety of ways, but for the most part you’ll be expected to play well and have earned powerful equipment to survive the deeper reaches of the dungeon.

Where Necropolis and Dark Souls set themselves apart is in delivery. Both games have a grim atmosphere, where the silences are as telling as the fast action moments; but where Dark Souls aims to tell a melancholic and quite poetic story, like the gothic epics of old, Necropolis is more interested in having a laugh. It’s an incredibly self-aware game, and the messages that it delivers at the start of each adventure, and the character’s inevitable death, are often hilarious. There is mystery to Necropolis: for example, there’s a giant ziggurat that keeps sending thoughts at you telepathically, and a withered old crone straight from a Souls game who will sell you stuff. That mystery will take some piecing together over many play sessions and character deaths, just like in the Souls games. But if it’s possible for a game to wink, Necropolis’s little moments of dry or sarcastic humour make sure that we all know that it’s quite self-aware, and indeed highlights how fundamentally pretentious these kinds of games can be in trying to be “obscure.”

The randomness of level design, meanwhile, will make you appreciate just how perfectly tuned the Souls games are. The Necropolis labyrinth is split into rooms, each with a doorway in and one or two doorways back out. While there’s a moment of apprehension every time your character moves through a door, as the room beyond could be anything from benign to guaranteed annihilation for your character, the lack of control the developers have over the experience means that the deeply meaningful environmental storytelling of the Dark Souls games is lacking here. What the developers have done in incorporating puzzles, traps, and complex linking between rooms in Necropolis is truly impressive. Most roguelikes feature little more than corridors and rooms randomly played in a completely incoherent manner. Necropolis is much more than that, but at the same time the environments never feel “planned,” and there’s never a sense, as your character wanders through the hallways, that the level design team actually created a history for the space to give it narrative context. As a consequence the world of Necropolis feels empty and, dare I say it, dull. 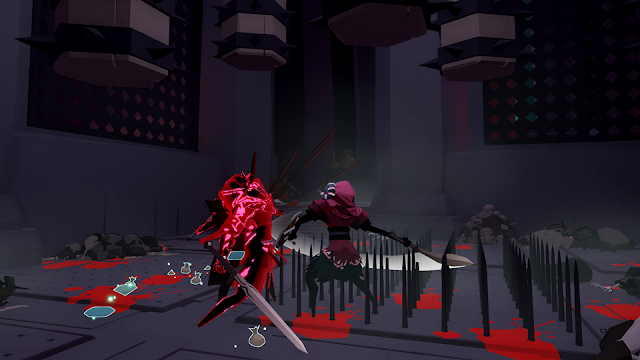 The first encounter with each new enemy is a truly intense moment. Even the most basic foes can be threatening in groups, and many of them have attack patterns that aren’t immediately predictable. Enemies do begin to feel less threatening as you get used to the attack patterns, and they do so at a quicker rate than in the Souls games, where there are enemies (not even bosses) that to this day I don’t look forward to facing. Here, too, the game has fun with itself, though, by turning friendly fire off. A big horde of monsters descending on you is not necessarily going to spell game over; provided you’re smart with the dodging and blocking, you’ll be able to remove half the enemies before you’ve even swung your own weapon. It’s something you’ll need to watch in multiplayer, too, because it’s quite possible to accidentally kill your allies (yes, accidentally). Kicking own goals is always good for a laugh.

As the game drags on, the sameness results in tedium, especially if you’re not enjoying the adventure with friends (and you’ll need to be friends with them, as Necropolis doesn’t do random matchmaking). Repetition and what effectively amounts to palette-swapped enemies suggest that the development team had a wonderful idea, but lacked the creative vision to extend it across an entire game.

Necropolis is best taken as a satire. It’s not perfect in that role, but it’s good fun nonetheless, and a healthy foil to the kind of experiences that have become so in-demand with the success of the Souls games. If you’re able to get the full complement of four players together, you’re in for some classically entertaining and self-aware dungeon crawling fun.