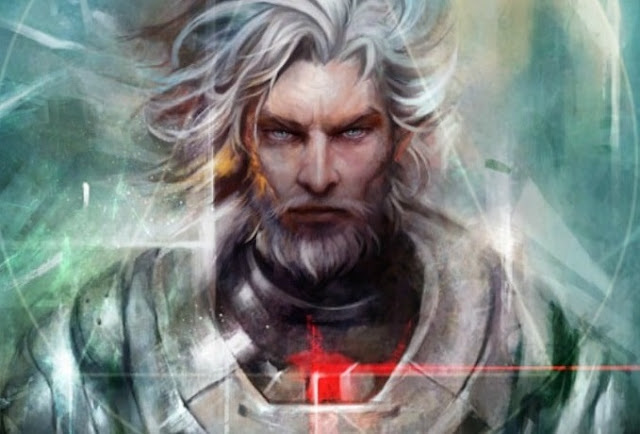 When the son of a large, intergalactic corporation goes missing on a remote, derelict mining planet, a squad of mercenaries is sent on a search and rescue mission. However, a crash landing leaves only one survivor, an old soldier by the name of Jameson. Alone on a hostile alien planet, he has to find a way to escape, uncovering the mysteries that the planet holds.

Doing so involves exploring an expansive network of forests, caves, temples, factories, and other locations, with the aid of upgrades for his power suit. Boots that eliminate fall damage, double jumps, and underwater breathing are just a few of the upgrades you find along the way, and each one gives you new ways to reach previously inaccessible areas. 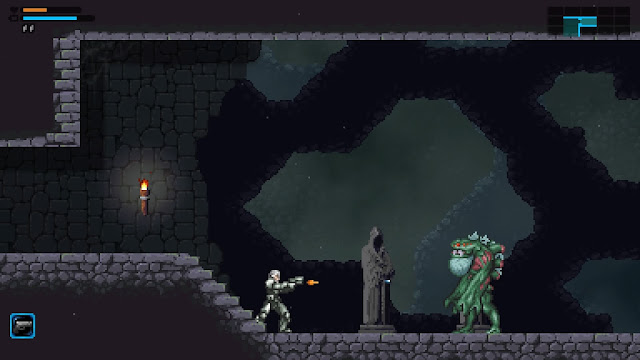 What at first appears to be a simple 2D platformer in terms of level design quickly gives way to a labyrinth of interconnected pathways. It’s a game that rewards exploration – not just because of what you find hidden away, but also because of the intrinsic thrill of piecing together the puzzle that is the map. You may find a shortcut back to somewhere you’ve been before, you may find a health upgrade or a new gun, you may just fill in another segment of the map. Whatever the case, the process of discovery is an exciting one.

Sound familiar? Despite the developer’s proclamations to the contrary, Exile’s End is Metroid in all but name. I don’t just mean that in terms of upgrades and level design either; Exile’s End has that same sense of foreboding isolation that’s such a trademark of Metroid, despite the fact that Jameson has radio contact with an off-world ally. It even has a similar art style, with 16-bit graphics that are relatively simple, even by pixel art standards, but use background layers to create a fantastic sense of depth.

Unfortunately, Exile’s End also comes with all the flaws of the games that so clearly inspired it. Brilliant as Metroid and Super Metroid are, the genre that they spawned has come a long way in the last couple of decades, especially when it comes to user-friendliness. Like so many games designed to mimic the difficulty of the 8-bit generation, Exile’s End seems to mistake tedium and frustration for the sort of carefully-designed challenge that actually brings something to the table. 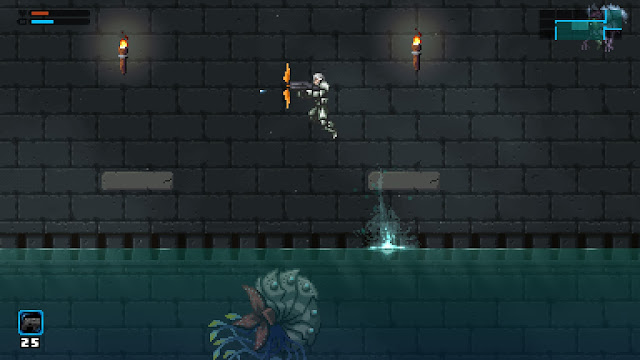 Objectives are often vague, resulting in a lot of aimless running around as you try to figure out where to go next. Given the exploration-driven nature of the game, this isn’t a bad thing in its own right, but it’s complicated by a raft of other issues. There’s no way of tracking goals, or even getting a reminder of what’s happening. If you miss a hint in some dialogue, accidentally skip a cutscene – which is surprisingly easy to do – or simply forget, you’re out of luck.

The simple map shows where you’ve been, and hints at places you haven’t, but there are no annotations of any sort. At any given time, you’ll have a handful of unexplored places sprawled across the breadth of the map, but there’s no way of keeping track of just what it is that’s stopping you from progressing at each of these points. It’s always exciting to go back and revisit places with a new upgrade, but unless you can remember where and when you encountered whatever it is that you can now traverse, expect more aimless running around.

To top it all off, the adventure game-style puzzles are often obscure to a fault. The one that particularly stands out is a door that you need to unlock by lighting three nearby candles – only, the candles don’t look anything like candles when they’re not lit, there’s no indication that they have any connection to the door, and you have no means of starting a fire. As it turns out, you light a candle by jumping past it, but because they’re a bit out of the way and just look like part of the background, there’s nothing that would even suggest doing this. To be fair, this is one of the more extreme examples, but there are a lot of similarly vague puzzles. 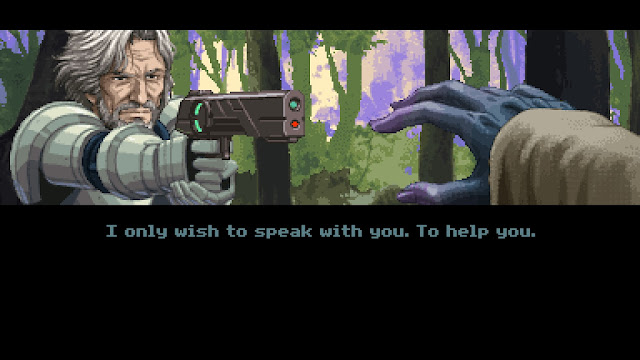 Some people will enjoy this, of course, but in my experience, playing Exile’s End involves a lot more aimless running around than it should. It’s frustrating because these are all problems that have been solved as the Metroidvania genre’s developed over the years. When it’s allowed to shine, it’s a wonderful game that almost rivals the original Metroid, I just wish it didn’t spend so much time getting in its own way out of a commitment to dated ideas about difficulty.

On the ridiculous expectations that people have for Final Fantasy