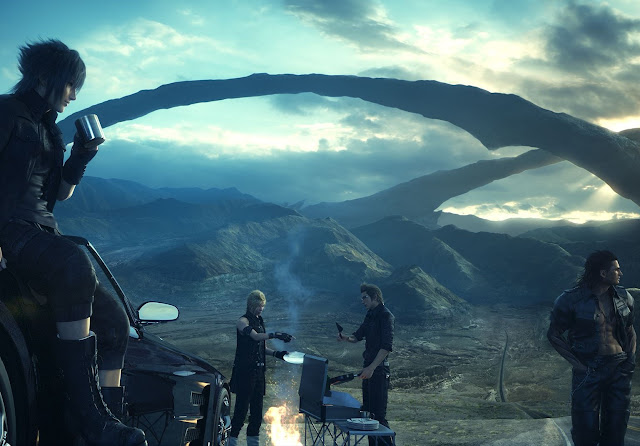 I am reviewing Final Fantasy XV, but it’s going to take quite a while; expect it towards the end of the week. It’s not just that the game is huge (it most certainly is, and I’m not nearly far enough through it to start judging it purely on content), it’s also a game that I will need to sit down and really think on.

Related reading: It’s all but essential that you watch Final Fantasy XV: Kingsglaive before playing this game in order to get the full back story. Matt’s write-up of that.

In short, I’m not ready to review Final Fantasy XV yet, but I can tell you right now that this is the most intelligent and fundamentally interesting AAA game that we’ve seen in quite some time. If this one doesn’t restore people’s faith in Final Fantasy as a franchise, then nothing will.

The very first thing that pops up when you start playing is the simple message: A Final Fantasy for Fans and First-Timers. It’s clearly the mission statement that the development team took to the entire game; that this should be a game that everyone could enjoy, even if they’ve never played a Final Fantasy before, but would also have those elements and features that Final Fantasy veterans would appreciate. I was worried before the game was released that Square Enix, in going for the ultra-pacey combat and big open world-like gameplay, would forget about the core that makes a Final Fantasy game so compelling. The prequel film helped allay those fears, but when I started playing the actual game, residual concerns washed away instantly; this doesn’t feel like an open world game, though it assuredly is one. This doesn’t feel like an action game, though it certainly pushes you through combat quickly. This is vintage Final Fantasy, dressed up in such a way that, one hopes, the series can find a new audience.

The first thing that you see when you start playing is a group of four young men pushing a broken-down car along a highway, as Stand By Me plays in the background. They’re bantering with one another in youthful exuberance, without a genuine care in the world. This is a big adventure for them, and right from that moment you know that Square Enix was quite genuine in its promises that this a coming of age story. Because it doesn’t take long for things to go to hell, and suddenly the adventure they’re thrown in is all-to-real. Each of them will need to grow up quickly.

At the same time, the narrative so far doesn’t feel forced in the slightest, and, even more impressively, that applies to the characters. Each of the boys looks like he would fit nicely into a cliche; there’s the big burly guy, the sexy glasses-wearing nerd, and prince Noctis, the main protagonist, looks like he should be the vintage Squall/ Cloud emo type. But they’re not, right from the outset. These are just kids. There’s no nonsensical typecasting pidgonholing each character into a single personality trait, which the Final Fantasy series is so well known for. They have rounded and interesting personalities, and with such an intense focus on just the four of them, we get to know them pretty well, pretty quickly.

I was also disappointed when the news originally broke that this was going to be a game with no playable female characters. The women have always been my favourite Final Fantasy characters, but because this game is so authentically about the bonding between men, it does make sense that the core adventuring group would not include women. It’s not like women don’t participate in the story, either; I’m quite in love with Lunafreya, who seems to be much more than the standard damsel in distress type. In all aspects Square Enix has been really careful with the writing, and it’s the most mature and refined plot we’ve seen in a Final Fantasy game to date. 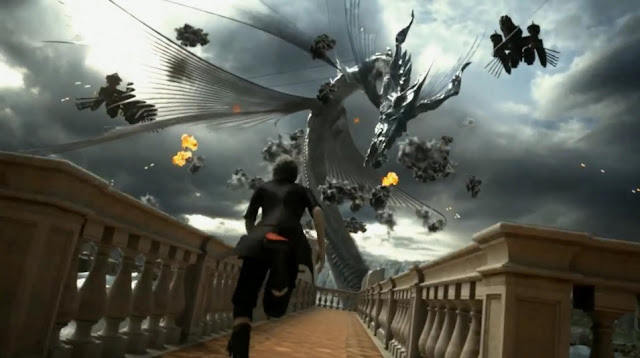 At the same time, the game doesn’t lose its heritage. The enemy is an empire that uses magitek technology to overpower its foes. There are crystals, and there’s the odd moment that very carefully refers back to previous Final Fantasy games. About an hour into the game, we have a moment with the group of men looking out over the ruins of their homeland (having been attacked by the empire), and it’s strongly reminiscent of the moment in the original Final Fantasy when the group pass over the bridge for the first time.

The game is filled with references back to its Final Fantasy heritage. You can ride chocobos. When you’re driving around in the car, you can put a variety of Final Fantasy soundtracks on to listen to in the background. Plenty of the enemies will be familiar to Final Fantasy fans, and the flow of the game itself is so reminiscent of Final Fantasy tradition. For all the promise of an open world, if you simply want to participate in the narrative, it’s possible to have the car autopilot you down the road to the next location. When you play that way, you’ll be experiencing the same flow as the typical Final Fantasy game, having some rest time in a “town” area before heading out on a combat mission. Alternatively, you can go exploring – and what a massive world there is to explore in Final Fantasy XV. The structure for missions is perhaps not as refined as in the other great open world RPG, The Witcher 3, but it’s certainly less obsessive in its busywork, as in the likes of Dragon Age: Inquisition, and that’s for the better. The world has a more organic feel than other open world games, which are too busy and “gamey” to be places to exist within.

Final Fantasy XV is incredible, and if you’re looking for some buyer’s advice, then while this isn’t a review, I’m confident that the rest of the game will live up to the first 15 or so hours I’ve played so far, and I therefore have no problem recommending it. The review itself will come later this week, after I’ve had a chance to better digest the deeper themes of the narrative; but on a very simple level, it is so, so good to finally have a new Final Fantasy game to play. It’s been a while between bites.