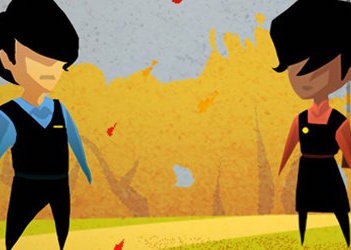 The boom in indie development has seen a wonderful surge in puzzle platformers over the last few years. It makes sense, when you think about it: this is a genre that’s low on development needs (relatively speaking), but with an incredibly high ceiling for creativity and innovation. The basic mechanics of the 2D platformer are robust enough and open-ended enough to allow for a huge degree of experimentation, the likes of which we’ve seen in everything from introspective deconstructions like Limbo to games that push the boundaries of puzzle design, like Fez.

Four Sided Fantasy yet another example of that kind of creativity at work. Under normal circumstances, it works like any other platformer as the camera tracks your movements, but at any point in time you can hold R2 to “freeze” the screen and walk off the edge. Doing so causes you to wrap around to the opposite edge – so running out of the right-hand edge of the screen will make you appear in the left, falling through the bottom will make you appear at the top, and so on.

This setup allows for some intriguing puzzles. They start quite simply, as you overcome straightforward obstacles by wrapping around to the other side of them, but they progressively get more demanding and challenge your spatial reasoning. Some puzzles will task you with “falling upwards”, so to speak, by dropping out of the bottom of the frame, un-freezing when you appear at the top so that the camera centres on you, and then freezing it again – now at a higher point than you could have reached by jumping – and so on, to keep getting higher and higher. Others need you to be very precise in when and where you freeze the frame, so that the geometry of the level lines up just right and you can squeeze through a gap. 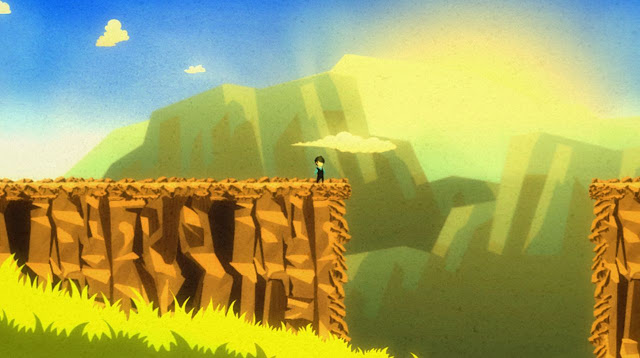 To further complicate matters, each new level introduces its own gimmick. In one level, gravity reverses each time you wrap, forcing you to plan your moves so that positioning and gravity both line up to allow you to bypass obstacles. Another stage is divided into two planes, with every wrap having the additional quirk of switching between them. The most challenging level cuts the screen in half, freezing whichever side you’re not using so that you can drag disparate pieces of the level together. It all adds up to up to some rather brain-bending puzzling.

That said, Four Sided Fantasy is relatively easy by puzzle platformer standards, and as much as it makes you think outside the box, solutions usually present themselves before too long. This isn’t a bad thing at all, and it gives the game a meditative quality that fits in well with the serene presentation, but it also feels like this curious framework doesn’t come close to being pushed to its limits. On the other hand, I did find myself relying on trial and error quite often, which was mildly frustrating, but that’s perhaps a failure of my own spatial reasoning as much as may be the fault of the game’s design.

Fortunately, this trial-and-error never got so tiresome that it impacted the overall mood of the game. As I said, it’s a meditative, serene game, with a beautiful papercraft aesthetic and mellow soundtrack. It’s a game that’s less about overcoming obtuse challenges as it is about going with the flow. In the developers’ own words, it’s a “concise puzzle gaming experience that respects your time” – this is no doubt a reference to the brevity of the game, but in respecting your time, Four Sided Fantasy also doesn’t expect you to spent the bulk of a play session bashing your head against a brick wall trying to find some abstract solution. 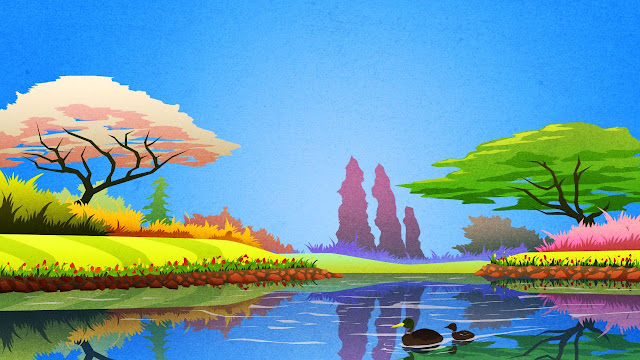 The one puzzle that doesn’t have any easy solution, however, is the story. Simply put, it’s a vague, wordless tale that’s less about plot and more about emotion, as you guide a pair of nameless protagonists across a beautiful landscape over the course of four seasons. It’s the sort of narrative that’ll leave many players scratching their heads and asking “What does it mean?”, but that meaning will come from your own personal take on the events of the game.

For me, it was a bittersweet tale of star-crossed lovers, going to the ends of the earth in an effort to be together but never quite getting there – in fact, they were foiling themselves with their very effort to connect. Every time you wrap, you switch between the two characters, so they’re constantly working together to proceed through the game, but the obstacles that you, as the player, are trying to overcome serve as ever-present barriers between the two characters. It’s a poignant image painted through the very heart of the game’s mechanics, all wrapped up with an ending that’s strange and depressing, but a perfect fit for this take on the game.

Other perspectives I’ve seen suggest that it’s the story of childhood friends or siblings drifting apart as they grow old and move through life – that for all our efforts to keep in touch with those close to us, life has an annoying tendency of getting in the way. It’s the sort of narrative that’s open to interpretation, with just enough structure to allow players to project their own subjective experiences on to it. Even if you’re not interested in that kind of deep reading, there’s a blissful experience to be had in just letting the beauty of the game wash over you.

At the very least, Four Sided Fantasy is a welcome addition to the flourishing pool of indie puzzle platformers, and is yet more proof that there’s still plenty of life left in the genre.

Retro Reflections: On one of my first branching story JRPGs