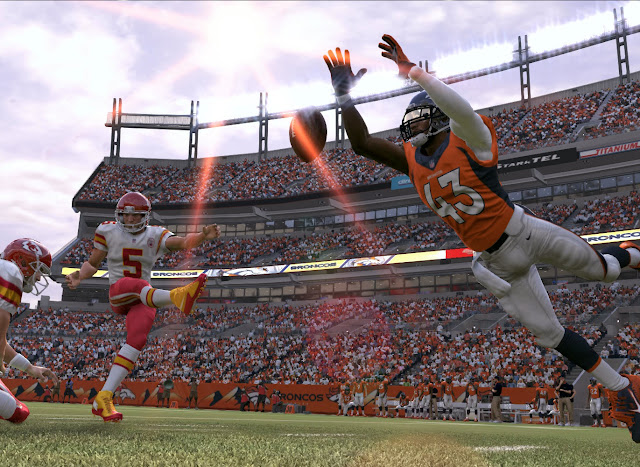 There will always be some people who say that sports titles should not update every year, but perhaps just offer up their rosters as a DLC update. I disagree with that notion, so long as the development team continues to try and improve on what they had with future iterations. Not every new feature or idea works in any single sports release, and there is probably never going to be any such thing as the perfect NFL video game, but Madden NFL 17 is certainly a step towards that lofty goal.

As someone who has been playing Madden football since the Sega Genesis days, I have seen a lot of changes in the series over the years. Some of them work really well (hit stick) and some are pretty terrible (QB passing cone or fight for the fumble). The big shiny things are what people look for in any new release, and there are some worth noting here with this release.

Some of the newer items of note include the new announcers (something I was super excited by back in the 2016 EA E3 conference and a frequent point of criticism for me over the last few years), a tackle-breaking mini-game, modifications in how zone coverage AI works, a kick block mechanic and new options for making Franchise mode a more streamlined experience. 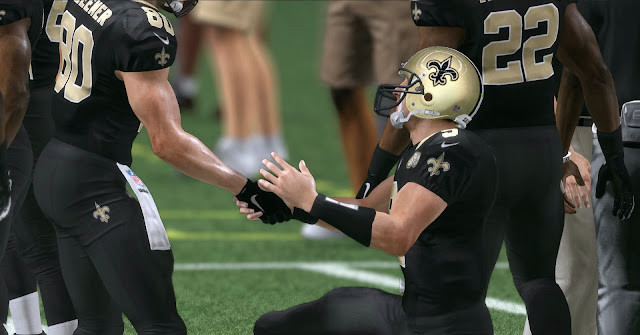 These are the items that make it easier for EA to sell the updated version of the game because such features can call attention to why players should make the investment. For me however, it is often the little things that make or break the experience once I am more than a day or two into the game, and Madden NFL 17 pulls it weight on that front as well. Like the actual game of football, sometimes it is the dirty work in the trenches that make the biggest impact, and here Madden 17 succeeds more often than not.

First and foremost, I need to talk about the commentary. When Madden first released years ago and John Madden’s trademark “Boom!”s were incorporated, they were awesome. Over the years technological improvements allowed for the audio component of the Madden games to become more sophisticated as they attempted to replicate the broadcast experience. The last few years Jim Nantz and Phil Simms led the charge on the commentary, and whether you love or hate them, they added a sense of authenticity to the presentation. That being said, the audio system was really starting to show its age with recycled lines I had heard over and over again the prior couple of years, and also comments that seemed out of context with the action on the field. What once was a highlight for the series in making the experience more authentic was starting to hurt the game badly.

This year we have a couple of new voices in the booth who are far less well-known in Charles Davis and Brandon Gaudin, but they do a great job in not only bringing some fresh commentary to the table, but providing EA with a lot of options going forward. I recall reading one article prior to the game’s release that because these two announcers had fewer commitments to tie them up, EA was able to record three times the commentary with them than they had been able to with their prior stable of announces over the last few years. Additionally, they have stated that both Charles and Brandon will continue to record new stuff that will be injected over the coming season in an effort to keep things as relevant and fresh as possible. As someone who had grown very tired of some of Phil Simms’ stilted remarks being rehashed over the past few years, these two are a welcome breath of fresh air. However, it is not just the new audio itself that stands out (and both of these guys are great to listen to), but how effectively EA has managed to stitch together the audio so seamlessly.

The action on the field is very similar to what we have seen out of Madden 17 over the last few years, but there are plenty of refinements to take note of. The engine that EA Sports introduced a few years ago is finally maturing into a place where awkward/unrealistic animations happen far less than they used to and the end result is a series of fluid interactions that really pop on the running moves in particular. Instead of having a specific outcome based on X player coming at Y player from Z angle, I have seen those exact same scenarios play out in dozens of different ways now, and it is a far more realistic representation of the pro game. It really shows up in the ball carrying, where heavier players truck over defenders more effectively than their skinnier counterparts who rely on jukes and spins to leave defenders in the dust. When tackling does happen, the aforementioned mini-game is an interesting change of pace. Instead of simply hammering away on a button and hoping that luck breaks the tackle, now a button icon will occasionally pop up on-screen over the ball carrier’s head and the player to press the corresponding button ‘wins’. This means if the ball carrier wins, he breaks the tackle and if the defender wins, the ball carrier is going to get planted hard. When I first heard about the feature, I thought it might play out similar to the old Fight for the Fumble mechanic years ago that I hated, but in fact this is a pretty seamless integration I am quite fond of. 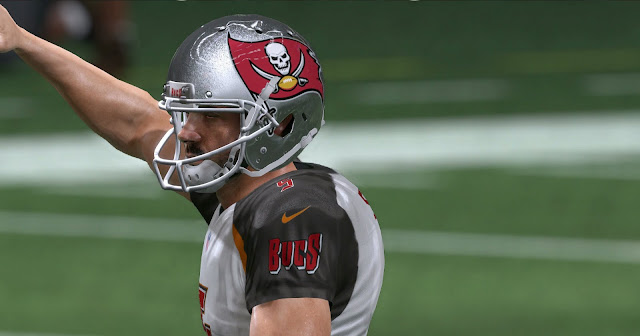 The trench play is also continuing to see improvement. Defenders shoot gaps like never before. Blockers actually do a decent job of sealing seams and trying to create pockets, but in years past defensive linemen simply engaged blockers while linebackers seemed to be on rails – rushing forward or dropping back without any real regard for the holes in the line. This system still could use refinement, but the improvement is notable. The changes in zone coverage are also legitimate. I have been relying on man coverage almost exclusively for the last few years, but the addition to the zone behaviours works because it makes the coverage less predictable than before. I will state that I still have an easier time throwing the ball than running it, but I was not as capable of taking advantage of the opposing AI defensively as I have been in the past. Additionally, I did not find myself using man coverage so heavily. This year zone is a viable option that works in specific situations – just like it should be.

While I like the idea that you can have key moments in the blocking of the kicking game, it sounds better in theory than in execution. I like that the option is there, and it is very cool when it happens – but it still seems a little difficult to pull off. Maybe my own personal timing is just off – it’s not as though I am new to the series, but it took me nearly five full seasons in Franchise mode to pull off my first successful block. I realise these should not be happening every week, but I would guess most teams get a blocked punt or kick more frequently than once every half a decade.

As Franchise Mode is where I spend the majority of my time (go Lions!), I found some of the new changes to be pretty interesting. The addition of the practice squad and the ability to edit the everything about anyone are nice touches that the community has been asking about for some time now. The Big Decisions system plays out pretty simply at first, with things like whether to cut a player or trade for someone at a particular position coming across as somewhat artificial and not really all that big of a deal. However, there are some nice wrinkles that show up later such as whether or not to play your injured star that I rather enjoyed. Also, weekly practices are useful again as you try to gameplan for your upcoming opponents while earning some experience for your players so they can be further developed. 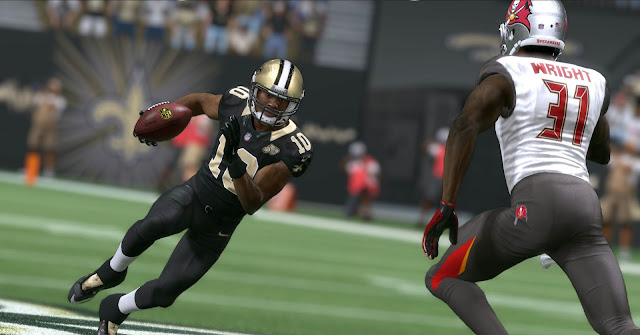 One of the new features that I like, even though I personally don’t get much use out of it, is the idea of playing important moments during the game and simulating the rest. For those familiar with the Madden franchise, think of it as how Career Mode played out in the past where you only participate in the on-field action when your player is in the game. Here Madden simulates most of the game for you, but has you come in and manage a particular down or possession turning a roughly one hour experience into something you can plough through in say fifteen or twenty minutes. I am too much of a control freak to want to do this, but for my buddy Mike at work who has very limited pockets of time to play loves it.

There are some returning modes as well such as Madden Ultimate Team (it is sort of like card collecting where you earn rewards to purchase packs of cards that then give you access to those players) and Draft modes (think Fantasy Football where you draft your team out of pools of available players), online and more. These are all worthy distractions, but I tend to lose myself in the team management options of Franchise Mode the most and that is where I believe Madden 17 delivers the most bang for its buck.

Madden NFL 17 is not a perfect game. You still have a handful of oddball AI and animation moments, but they are far fewer between than in years past and this year’s iteration delivers a much more authentic experience than any football game has to date. Is Madden NFL 17 worth upgrading to if you already own last year’s version? I believe so as it is a step forward in just about every area and there were no discernible steps backwards.