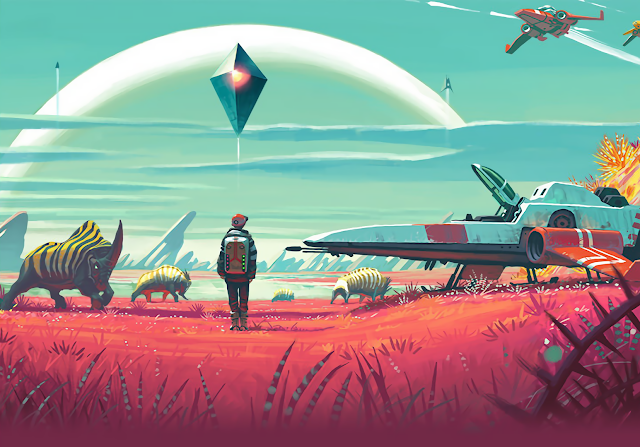 Welcome to 2016, a year with more amazing game releases than anybody could possibly play, and a year in which people are losing their minds because a highly-anticipated game might be “only” 30 hours long. Someone who allegedly obtained a copy pre-release shared some details about the game, including the claim that he reached the centre of the universe—ostensibly the game’s overarching goal—in some 30 hours, despite developer claims that this would take hundreds of hours.

Now, there’s a lot to pick apart in this whole thing. Has this guy actually reached the centre of the universe, or is he just confusing that with the centre of one of the game’s galaxies? Even if it is a 30-hour game, that’s hardly a small amount of time. As Vice’s Austin Walker points out, it brings a lot of the game industry’s hype culture problem into focus.

What most concerns me, though, is that this is just the latest in a long line of “scandals” about the length of a game. Metal Gear Solid V: Ground Zeroes, The Order: 1886, and Ryse: Son of Rome are just a few recent examples of games thrown under the bus in the lead up to their release for report around their length. This is all just part of a wider, ongoing discussion about game length and perceived worth in terms of “bang for your buck.” It’s a valuation system that prioritizes quantity over quality, which is very strange to me. Is a long, crappy game really better value than a short one that’s great? How does having to spend more time with a bad game just to get some sense of closure improve the experience in any way?

This ties closely into another game industry obsession with how big a game is in terms of sheer size of the game world—be it the size of the maps, the number of environments, or both. There was a lot of concern about Destiny having just four planets at its launch, but that was the least of its problems, as it turned out. If it hadn’t been such a soulless and vapid game, those four planets would have been plenty. On the other hand, I’ve seen a lot of criticism of Star Ocean: Integrity and Faithlessness’ lack of environments and single-planet setting, but to me that’s a non issue because those locations themselves are lovely and the game and story that ties them all together is great.

Of course, the marketing arm has responded by doing what it does, which is speaking the language of the audience and trying to sell games on scope. I’ve lost count of how many headlines I’ve seen boasting the purported length of a game, or claiming that the map for this particular generic, pointlessly open-world game is just so much bigger than its predecessor.

No Man’s Sky has been no different, with advertising materials celebrating its 18 quintillion planets as though that’s a marker of quality and Sean Murray talking about the hundreds of hours it would take to finish the game. If No Man’s Sky turns out to be the wonderful game I hope it will be, it won’t be because of how big or how long it is—it will be because of how captivating the sense of exploration and discovery is, and scope is just a means to that end.

This isn’t to say that games can’t or shouldn’t be criticised on scale, because they absolutely can. A game can be too short, and it can be too small—but it can also be too long, or too big. It’s not a question of raw numbers or some pseudo-objective measure about how long a game that costs X dollars should be, but of the experience that’s been crafted and how well the scope fits that.

If a game is too short, it’s because it felt somehow incomplete, like there was more story that needed to be told or aspects of the game design that never got the time they needed to grow, not because you finished it in 8 hours and wanted to play it for 20. If a game is too small, it’s because the experience felt constrained by its size and the quality suffered as a result, not because other similar games have maps that are bigger.

This focus on scale is worrying, because the publishers are listening. They’re taking otherwise good games and watering down the experiences by filling them with bloat. They’re artificially padding out stories to meet some arbitrary quota of how long a game “should” be. They’re taking games that would be better served by being linear, focused experiences and turning them into big, open-world games because it’s the Thing To Do.

All the power of this generation’s hardware is being funnelled into games that are bigger, instead of pushing the boundaries of what games can be and can do, and that’s because we keep demanding that. We complain about games being too short and too small, so publishers listen and make games that are bigger and longer.

While all this goes on, we laugh and joke about about how expansive our backlogs are. We live in a time in which we’re inundated with more games—good games, bad games, and everything in between—than anyone could possibly play. We live in a time when games are cheaper than ever thanks to a sale-obsessed gaming culture and a relatively static price of games despite 20 years of inflation in every other part of the economy. Yet here we are, complaining that our games aren’t long enough, aren’t big enough, and aren’t good enough value for money.

Let’s try talking about the quality of the game, next time.