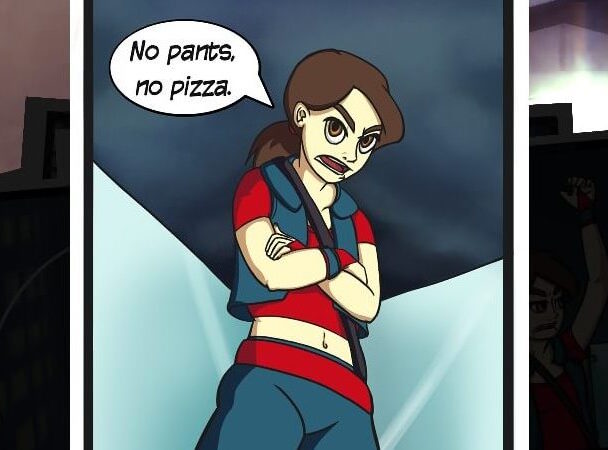 Ninja Pizza Girl is a sharp reminder that you should never be in pizza delivery. The nakedness that is potentially about to greet you with every door that you knock on is, all in itself, reason to list this right up there with the most hellish jobs there is.

Related reading: For a second opinion, Harvard has a review of the PC original release.

There’s a moment early on where you’re delivering a pizza to a guy that looks like he’s a fairly regular pizza connoisseur (i.e. he’s got rolls rolling over the top of more rolls), and he opens the door for you in nothing but his underwear. Now I mean, if it was Hatsune Miku there are the door, that would be one thing, but this is a bit like how nudist beaches quickly loose their appeal when you realise who actually goes to them.

I’m actually not sure if the developers have any experience in pizza delivery themselves, but I can confirm (by way of my first job) that this actually happens. And for some reason it’s never the future supermodels that are comfortable enough in their bodies to answer the door in well-worn undies.

Anyhow, that aside, this is actually a really ace little game from the Aussies at Disparity Games. Launched on PC last year, it has made its way to home consoles in what I believe is a far more natural fit for the kind of gameplay that it offers. By that I mean that you can play a platformer on PC, but if you’re anything like me you grew up with that particular genre on your Nintendo consoles and it just doesn’t feel right playing one while sitting at the computer desk.

Ninja Pizza Girl is a speedrunning platformer in which you need to get from one end of the level to the other in strict (often very strict) time frames. At your disposal to get there more quickly are various parkour moves allowing you to leap from building to building and seamlessly slide under obstacles as they pop up. While it’s not one of those auto “runner” games of the Temple Run ilk, and you do have control over your character’s movements, in practice you’re rarely going to be pressing the control pad in anything but hard left or right, depending on the way the level is designed.

Like with Mirror’s Edge, Ninja Pizza Girl is set on the rooftops, away from the masses, traffic, and hell on the streets. It’s liberating and the environment naturally facilitates the free running theme. It’s also vaguely dystopic in its aesthetics, though its heavy use of dark tones is a complete contrast to Mirror’s Edge’s bright minimalism. Unlike Mirror’s Edge, Ninja Pizza Girl has a sense of humour about what it does, however, with the exchanges between characters before and after missions being quite funny. 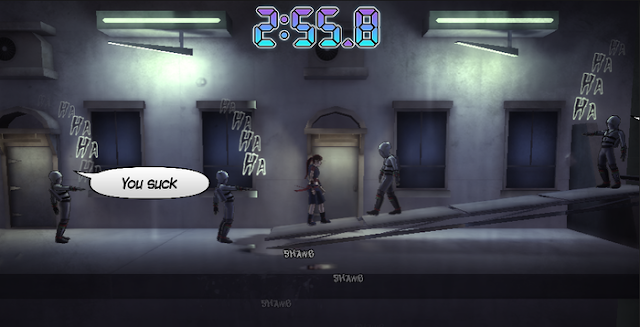 That humour belies some fairly serious themes running underneath the game, however. Ninja Pizza Girl’s narrative consistently addresses themes around bullying; a serious topic that Australian schools are grappling with (and I assume transfers across schools in most places around the world). Because the game has such a sense of humour its way of addressing the topic is never heavy handed, though it makes a clear point of it.

That’s between missions, however. In the missions themselves, it’s all about speed. Each level is non-linear in design; an arrow will point you in the vague direction of the objective, but each level has a couple of different possible paths to take, each with their own unique jumps and tricks to perform. Completionists will want to replay each level a few times, as there are collectibles in each level to pick up, but the main goal is to simply gun it from start to finish as quickly as possible.

It feels great in motion. Your character, moves with fluidity and grace, and obstacles are spaced in such a way that you’ll need to consistently move between jumping and sliding in order to get past them. Like a dance, there’s a certain rhythm to overcoming Ninja Pizza Girls’ challenges, and as the game starts to throw moving platforms, trampolines, and posts to swing off, it becomes challenging in just the right way; at no stage did I have my time affected by an obstacle and think to myself that it wasn’t possible to do better next time. 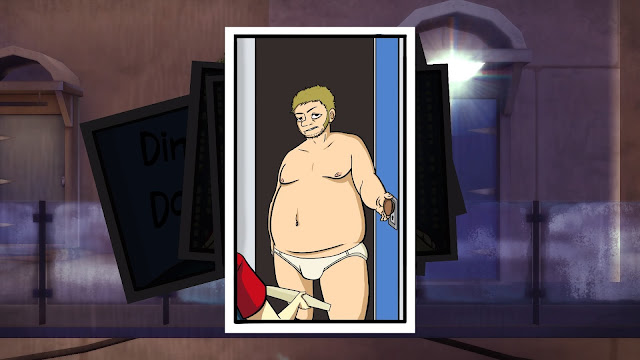 There are a couple of issue that let the game down. The more critical of these is the way that interactive objects occasionally blend in with the background. It does happen rarely, but when it does – especially at the speed that the game moves – it can make the first run through a level a little confusing. Of course, if you miss a jump it’s easy enough to roll with the punches and continue through a level on another path, so it’s really only the aforementioned completionists that will need to come to terms with the occasional difficult to spot object.

The other issue is the loading times. Ninja Pizza Girl isn’t an overly complex looking game – much of the aesthetic appeal is in the slick motion of the characters, so the loading times felt excessive to me. Normally this wouldn’t be as much of a bother, but when each level is done and dusted in a few minutes (at most), the need to constantly jump into a loading screen becomes draining.

Still, Ninja Pizza Girl is a fine little 2D platformer with a personality all of its own, a good sense of humour, and a strong message to share. It feels at home on console, played on the big screen television and with a controller in hand, and Disparity Games has on its hands an IP that deserves continued development into the future.

Review: I Am Setsuna (Sony PlayStation 4)