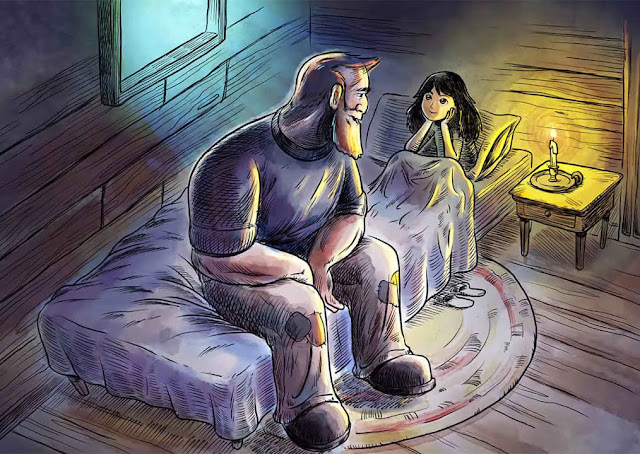 Song of the Deep is a beautiful game that tries to chart its own course, but too often reminds me of other, more polished games. That is not to say Song of the Deep is a bad game by any means, as there are several elements that make it interesting, but the end result is a mixed experience that is held back by repetition and a lacking narrative.

Things start off well enough, with an introduction not unlike a child’s fairytale book. The simple cinematics to start do an excellent job of setting the stage and making you invested in the protagonist. The tale begins by explaining how the young girl listens to her father’s fanciful stories about a world beneath the surface of the sea – a place he often ventures out into. One night he does not return, and our young girl find herself building a ramshackle submarine to try and locate her father.

The game then takes over and we are plunged right into the action with little tutorial or narrative takes a back seat to early exploration. Initially I was reminded of a game that we are very fond of here, Child of Light. The fantastic nature of it all, seen through the eyes of a young girl with a fairytale like narrative all wrapped up in a lovely visual package that makes great use of colour and parallax scrolling techniques as you explore the world and unlock new abilities along the way. 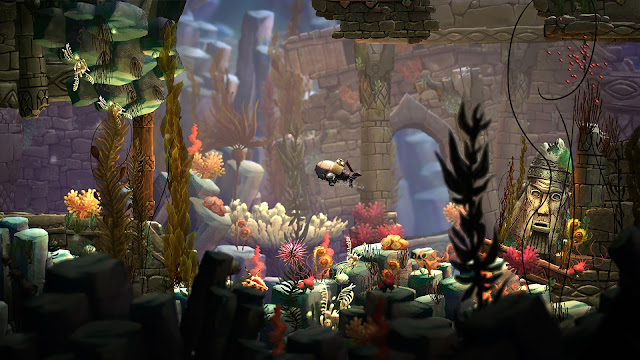 This is a tough comparison, because Child of Light was an amazing game for so many reasons, and this comparison begins to falter sooner than later as you become familiar with Song of the Deep. Child of Light continued to impress throughout the experience with a story that is skillfully layered over top of the entire game, where as Song of the Deep often seems to forget its narrative in exchange for exploration. Many would call this a Metroidvania-style game, and there is some truth to that but for better or for worse Song of the Deep has its own unique gameplay as well. Metroidvania titles are usually known for two things: lots of platforming action and an ability to gain new powers that not only enhance your ability to combat enemies but often to further explore your surroundings.

To the first point, there is no platforming here. You are in control of a submarine that by its very nature is able to move up down and all around the environment. The thing is, I could never really decide if I felt that this was a good thing or not, even by the game’s conclusion. I could appreciate doing something very new with the exploration, making the vertical element of stage design just as normal a part of the proceedings as the horizontal. Instead of needing platforms or special powers to make your way around the space like you might in Metroid, here you can do so by default.

I think the biggest issue is that the controls are sloppy. It can be difficult to move about and aim your skills, and not because of challenging game design but just the feeling that you are not in precise control of your submarine. Understandably, this could be intentional as momentum under the water is a very different thing to movement on land on in the air, but it does not necessarily make for enjoyable game design. Mini-boss battles where you use your submarine’s claw to grab and fling explosives exemplify this because the battles are not terribly hard or even that interesting, but more about dealing with the control scheme. 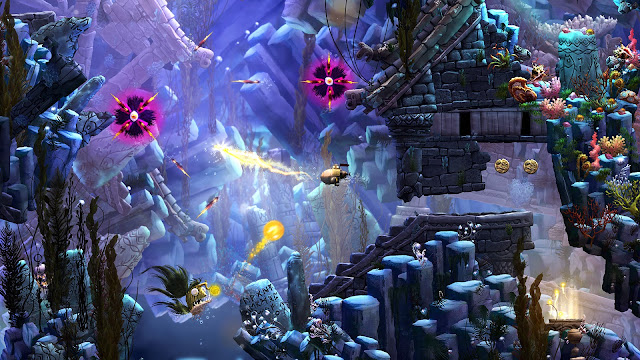 Things do fare better on the overall exploration aspect of the game as there are a myriad of powers that can be acquired throughout the game. Early on you will happen upon a claw that allows you to manipulate doors or to pick things up and throw or drop them. Perhaps you need to put a statue down on top up an altar that acts as a button that releases a door, or you need to whap enemies with said claw to do damage to them. Later you will find a more powerful engine that allows for you to move more quickly against enemies or to steer your little submarine against the flow of fast-moving waters and unlocking previously inaccessible areas. This part of the game handles really well, with a geniune sense of discovery that makes finding new powers quite satisfying.

If you are keen on exploration, the map is quite large and there is plenty to see and do. While I found the underwater setting a lovely one, filled with vivid colours and subtle movements that were pleasing to the eye, the actual gameplay began to grow repetitive sooner than later. Song of the Deep was already a somewhat short game (just over half a dozen hours to complete), but even at that length the action does become tiring. The imprecise nature of some attacks and an occasionally finicky camera meant that I found myself enjoying the puzzle-solving aspects of Song of the Deep much more thoroughly than I did the action.

Last but not least is the story itself. I will not delve into spoiler territory here, but the early voice work and charming foundation that was set becomes squandered by the game’s end as the tale was not wrapped up in very satisfying fashion. It is a shame because there is a certain quality to the music and visuals that want to invite the player into the game and enjoy it as the soundtrack manages to subtly mirror the visuals to create an environment that is somehow both serene and dangerous – beautiful yet haunting. 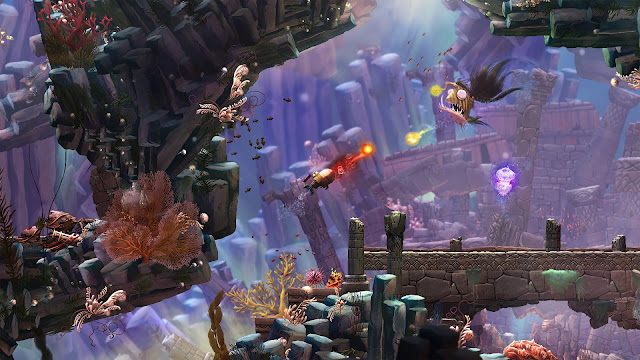 The overall package provided by Song of the Deep is a good one. The presentation is enjoyable and the puzzles and discovery of new powers are genuinely exciting. If you can look past repetitive combat and backtracking and are willing to live with a few technical hiccups along the way, Song of the Deep is enjoyable but flawed, with some unrealised potential around the narrative meaning it was a missed opportunity.