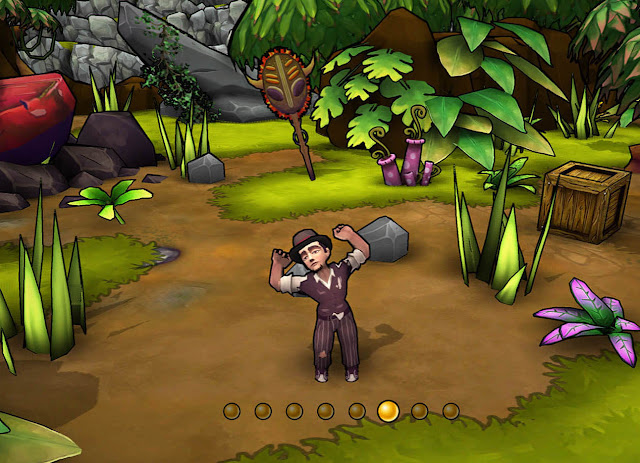 After eastasiasoft’s Rainbow Moon I high hopes for Lost Sea. It has a good set up, too. After a storm leaves you stranded on a mysterious island, you discover that you’re in the middle of the Bermuda triangle. You must fight to survive and escape the islands while armed only with your machete and a small crew.

Related reading: Matt’s review of Rainbow Moon on the PlayStation Vita.
You will start off with picking one of a few characters, with the standard mix of male and female, though cosmetic differences aside, they all play the same. Some differences between the characters would have been nice for replay value, but at least you can go for your favourite without worrying about whether you’ll like their play style. After picking a character you like you will be sent to the island where you will learn a little about where you are and how to play… and that’s about as far as the story goes. Rainbow Moon was plot thin, and this is even moreso.

Playing the game is simple. Your hero fights monsters to get experience points, find money, and then find tablets to advance to new islands, all the while hunting down some treasure along the way. Each island is procedurally generated but it felt like I saw some of the same places reused so frequently that I question whether there really are “millions” of possible islands as the sales pitch suggests. When you start you will have no skills or upgrades, but by killing monsters and gaining coins by breaking barrels you will be able to buy upgrades. One of the first skills you can get is the sprint skill and this does come in handy beyond the combat applications, as the characters walk slowly in their natural state. You also have a ship, which you can upgrade so that it will help you track down loot and the like. 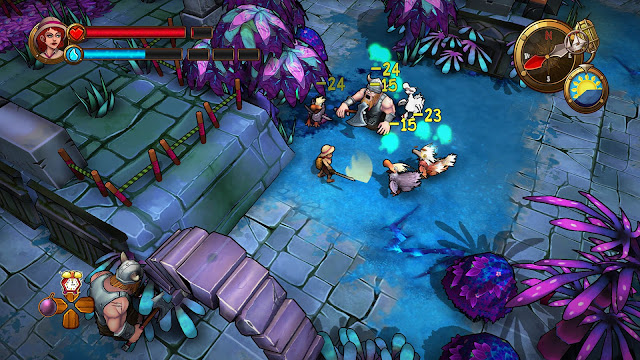 Another element of the game is in finding crew members to join you. At first, you can only have one crew member with you but as you progress you can upgrade it so you can have up to four with you at a time. The crew members all have skills they can use such as lock-picking to open chests or mining to dig up items or even a one time use revive to help when you get killed. They’re a pain in other ways though. For a start they cower in terror, rather than help in fights, and they are also incredibly stupid. I found more than once I had to go back to track one down because he got stuck on a tree or a ledge. Other than crew members you will also find items like a pistol, med-kits, or my favourite, the bomb, which kills everything in sight. Once you get an item you have to use it as there is no way to throw it away, which is a silly oversight, really. Games are better than that now, especially when it’s forcing you to use items that have negative effects, such as the adrenaline shot, which makes you move faster, but once it runs out you lose all your health.

To advance to a new island, you must find tablets on a level. Each level is rated from easy to hard where easy will have fewer monsters and have three tablets to find where hard will have more monsters and only one tablet. A tablet will have a number on it letting you advance to a new island. This plays out a little like a board game where the number of the tablet would be the result of a dice roll and you can move that many islands. After you beat all the levels on a stage you will face a boss: a pirate who shoots a cannon at you and then comes down to attack you – and that’s when you can attack him back. They reuse the same boss over and over again, which is lazy, especially considering his attack pattern wasn’t that interesting the first time around. He’ll move faster the harder he gets, and occasionally vary his attacks a little, but it’s hardly enough in an era where so many games have interesting and varied boss battles.

In my play through there was no way to save the game mid-play and the game would only save when you die. Since the game uses permadeath you may be playing the game for a few hours before you can have a break, and that’s not cool either. Luckily there is a warp feature. The warp feature will let you start a new game on any stages you made it to on a previous run. Doing so can be a bit tricky though as you will start with no upgrades, and the monsters will be tough to beat. On the bright side of things when you start a new game or a warp after dying you will get experience and coins based on how many tablets you found in your last play through, so at least there is a sense of progress there. 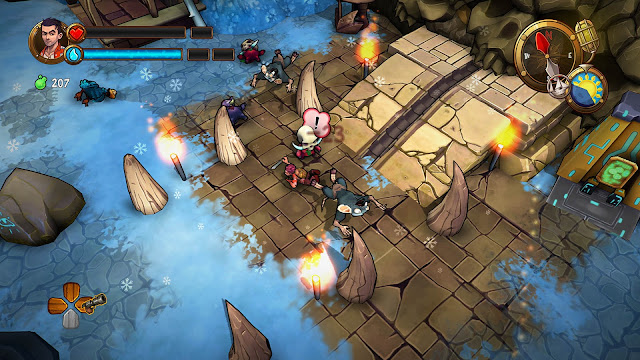 Note – there’s also plans to introduce a mid-game save at some point. While it won’t affect the overall quality of the game, this feature will be very welcome once it arrives for people that like to play in shorter bursts.

The game can be fun to play for a few hours here and there but repetitiveness filters through to the presentation, too, with reused music and visuals that become draining after a while. A co-op mode would also have helped out this game as it seems a good fit or sitting down with a friend and killing some time. Of course, Rainbow Moon was also repetitive, and it has an audience that loves it. I think that Lost Sea can expect to find a similarly dedicated fan base, because as an old-school throwback, it’s very old school, and very much a throwback.

On making a game about refugees