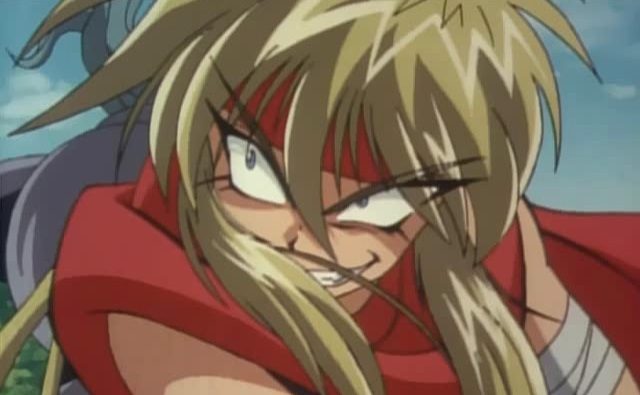 News by Clark A.
Discotek Media, the classic anime powerhouse, recently unveiled its launch plans for many future products. It’s revving up a respectable line-up that includes several instantly recognisable franchises. There’s even a couple video game adaptations in the form of Sonic X and the Street Fighter II movie (no, not that Street Fighter movie).
But among these announcements was a certain gem that has unjustly faded from public consciousness – Gokudo. If you started watching anime post-2000, you might not be familiar with the blonde jerk. After all, the out of print first release of his titular show fetches a pretty penny and hasn’t been readily available anywhere for years. That this show is seeing new life 17 years after its conclusion is astounding.
Gokudo’s escapades offer something well outside the scope of typical adventure and comedy shows. The soundtrack, too, features many standout 90s ditties in an era of ear-candy. It’s even one of those special shows I’d argue boasts an English dub as effective as the native language (sometimes more so). However, the anime’s true strength has nothing to do with any of these extraneous splendours; it’s as bonkers as anime gets. If you can roll with absurdist motifs, you can roll with Gokudo. The show’s synopsis tells of the eponymous swordsman making three wishes, but the ramifications of these desires are soon pushed the wayside as the show evolves into something more…abstract, if you will. 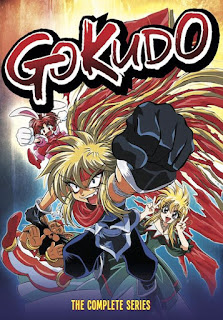 There is one scene in Gokudo wherein the body and gender swapped versions of the main cast assist a pregnant male panda seeking world domination in delivering his child aboard a flying carriage under attack by acid-spewing desert serpents. The panda’s baby turns out to be none other than the main protagonist’s prepubescent body, only occupied by a monkey’s soul. This isn’t the strangest scene in the show, nor is it the climax.
Equally winning are the antics of Gokudo, who is certainly one of anime’s less sympathetic characters. He’s best described as greedy, self-absorbed, and conceited. He will, quite literally and without provocation, sell the souls of his “friends” (a very generous term in relation to Gokudo) to the devil. Just for profit. As you can imagine, his lust-fuelled nature paves the way for incalculable catastrophes that affect everyone, including himself. Eventually cults, villainous Buddhists, and heavy doses of philosophy get thrown into the mix, which provides Gokudo with conflicts to promptly ignore in his endless pursuit of materialism. Until they affect his bottom line, anyway.
And yet, although the supporting cast acts nonchalantly and even the viewer might blink and miss it, there’s actually bits of (sometimes warped) character development for the seemingly irredeemable scumbag. Granted, much of the plot’s chaos was directly triggered by Gokudo to begin with and his overall nature remains outwardly unchanged, but I digress. It’s worth watching the show just to see how these rare moments of not-complete-detestability play out for the character.

You can nab the 26 episode Gokudo collection starting September 27th. Here’s hoping the anime also a digital re-release to complement the physical release.