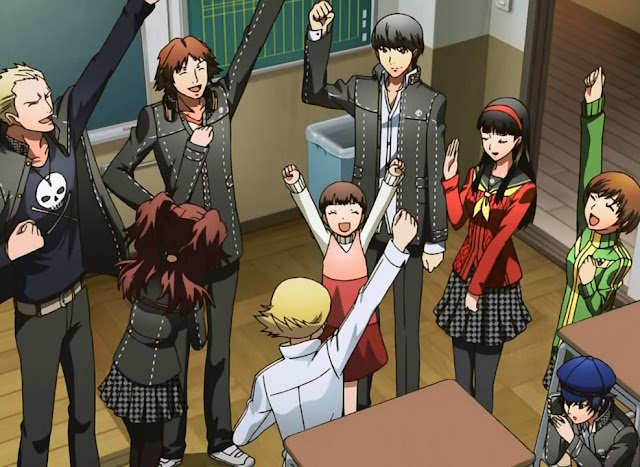 In my last art game canon piece I wrote about Nier, which is the game that I would argue has the most valuable, expressive, successful narrative that has been presented in such a way that only games, as non-linear experiences, could achieve.

This time around I’m going to look at Persona 4. This is a game that doesn’t take advantage of the video game medium to experiment with how story is told. It is, for all intents and purposes, a mostly linear narrative that would be, experientially, the same if it was told through a novel or film. But that’s not a criticism of the game either. Persona 4 is a rare game; if it was a novel or a film, I would continue to sing its praises just as loudly, because at the most basic of levels, it really is an incredible work of literature.

I’ve already written about some of the philosophy underpinning the thinking behind the game, but putting aside that relatively dry, academic stuff, Persona 4 also works as a story and it does so because it taps so completely into the warmest and most sentimental sense of nostalgia; both on a cultural as well as social basis.

Culturally, Persona 4 is an artefact of Japan in the most true sense of the word. This is a game about a nation that embraces modernity while remaining fiercely protective of its culture and tradition. At the start of the game, main protagonist Yu is on his way to spend a year with relatives that live in a distant, rural community. But it’s a community being disrupted, with a major shopping mall (Junes) having a heavy impact on the local shopping street, with most local businesses now shut down. 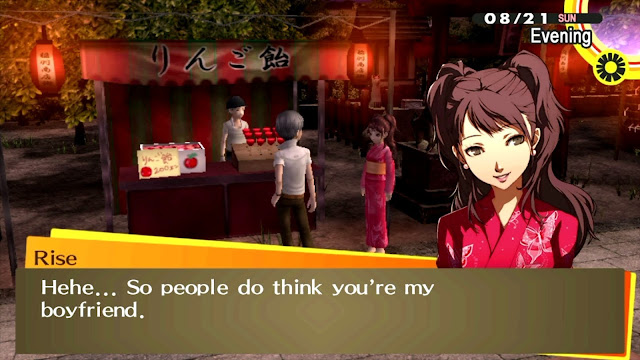 This is an economic process that is being felt throughout Japan in the real world. Each time I’ve visited the country I’ve taken the time to walk through local shopping streets, and every time there are fewer open shops in them. Those that are there are maintained by elderly grandparents, the business destined to pass with them as the children have long moved to more exciting careers. There is a palpable air of sadness to this, and every time, without fail, I’ve felt an overwhelming desire to make purchases from these remaining shops where I can. I’m not even Japanese, but the decrepit state of these areas, ruined and discarded from their communities by the commercial power of faceless corporations, is far more intense in Japan than anywhere else that I’ve been.

Persona 4 feels this melancholia itself, and does its best to encourage players to want to support local businesses too. It’s actually impossible to buy anything from Junes. All the shopping that you do in the game; for weapons, healing items, and so on, is done by shopping at these local stores. It’s a clever way to gently reflect on a tension that has been in Japan for a number of years now, while also helping to build the character of the environment that the game plays out in. If you were able to grab everything you needed to from Junes, then you’d be in for a fairly sterile experience – one that could be set almost anywhere. Instead you have to wander up and down a distinctly Japanese shopping street and bump into the eccentric characters that populate it.

Persona 4 further represents this conflict between modernity and tradition through the use of televisions as a central motif. It is through televisions that people are given access to the “shadow realm,” a hostile environment where they are forced to confront their darker sides. The TV world is dangerous, certainly, and Yu and his band of friends access it through the televisions of Junes, itself a hostile presence in the world of Persona 4.

Even the construction of the dungeons in this shadow realm reflect the negative characteristics typically associated with television. They are repetitive, devoid of interesting features, and quite forgettable in how quickly they fly by. It’s not until you reach the boss battles that anything memorable happens in these dungeons, and the process of getting to them is surely a reflection on the passive and mind-numbing experience of television itself. We know that this is deliberate design, because Yu’s little cousin, the only one to watch television for entertainment, is passively captive to it, only breaking her concentration on it to repeat the mind-numbingly commercial Junes jingle. When we are in those dungeons, we are every bit the captive ourselves. The creative team behind Persona 4 had nothing good to say about television, and cleverly reflect that by placing our team in a living experience of the dreary existence that the little girl suffers through. 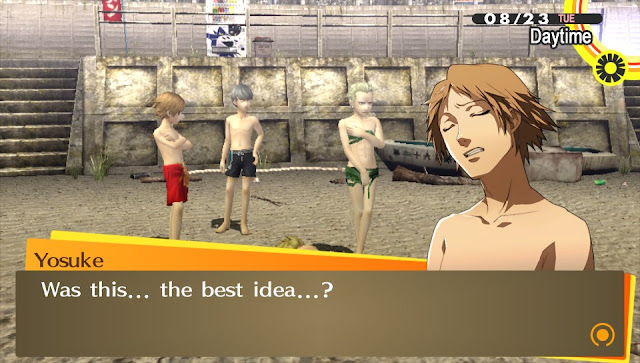 But at the same time, the bonds that Yu and his friends develop through these forays into the TV world are an overwhelming positive theme running through Persona 4. Indeed, the relationships between the characters, by turns funny, sad, romantic and light, is the thing that most fans of Persona 4 would identify as the greatest strength of the game. It’s through their time in the television world that each character witnesses the internal conflicts and darkness of their friends, and in overcoming that together, the bond between the group is made much stronger than in any simple friendship.

And that rolls back through into the normal world in Persona 4, where the group of friends, utterly inseparable, get up to all kinds of hijinks as they go through a year of school. Here, too, the narrative balances out the modern high school experience with traditional Japanese experiences; the kids go on a school excursion, are booked into love hotel rooms by once very odd teacher, and hit up a club where, they get drunk on non-alcoholic drinks to utterly hilarious effect. Earlier, the rite of passage of getting a scooter is a major deal, as it opens up the ability to go on dates to the cinema one town over (with Risette and only with Risette, naturally).

But in contrast, a summer festival presents the chance for the girls to dress up in their yukatas and the group bonds over the very traditional sights and smells of food stalls and red lanterns. For some R & R the friends stay at a traditional Japanese inn and enjoy a hot spring bath… well, the girls do. The guys actually walk in on the bathing girls and cop a torrent of wash baskets to the head. That scene is rather funny too.

In other words, the bonding that goes on through Persona 4 happens both within the context of Japanese modernity and tradition, and is heightened by the closeness the characters feel after experiencing their worst, together. A nostalgia for the kind of fleeting friendships that people experience through their school years is a common enough theme in art, but in Persona 4 it’s a theme that’s teased out to its most extreme degree, and thus the impact at the end, as the group is broken up, is all the more significant. I cried at the end of Persona 4. Not because I was disappointed that a game I’d just spent 80 hours addicted to was finally over (though I could have happily gone another 80 if it was going to maintain its standard of quality), but rather because it was an ending of palpable loss; the coming of age experience was drawing to an end, and that innocence where life and relationships were relatively simple and driven by youthful excitement and energy was over. 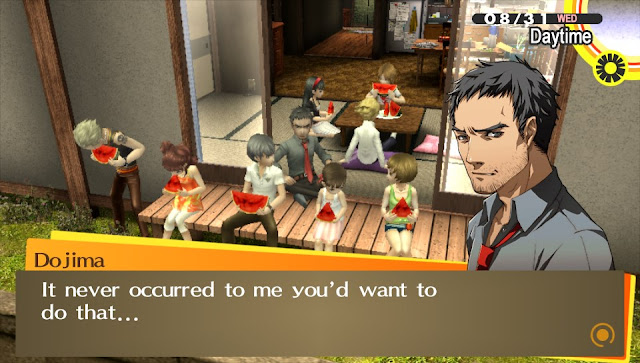 In this way Persona 4 is oddly like Stand By Me; a massively important film in Japan that likewise taps into the nostalgia for youth (and is blatantly informing Final Fantasy XV, while we’re at it). We go in knowing that the relationships that were building in front of our eyes were fleeting, and nonetheless it’s a mild tragedy when the inevitable happens and they end.

(Of course Persona 4: Dancing All Night later shows that the crew are able to reform, though even then there’s a notable tone through that game that the characters were indeed now mature, and their relationship has a distinctly different tone to it as a consequence).

Japan’s sentimentality for youth is tied to its sentimentality for tradition; a love of the very idea of a “simpler time.” Persona 4’s strength as a piece of Japanese literature, is that it is able to stay on message across its 80 hour run-time; it constantly finds ways to draw the experience the characters are going through, and the relationships that they are forming, to the relationship that Japan has with itself. It’s perhaps a little lucky that Persona 4 has resonated so well in the west, because it is a very, very, Japanese game, but then again perhaps that’s simply testament to just how perfectly it is able to wear its story and characters on its sleeve.

So, which Persona 4 character are you?