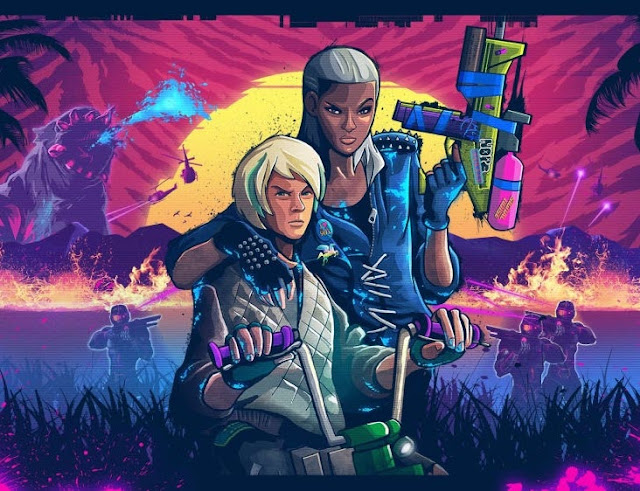 I have to give Ubisoft credit, because at times it comes out with corkers, and they often come out of nowhere. Trials of the Blood Dragon is another example of the publisher being willing to take some chances with its existing properties. It’s not perfect, but it’s genuinely good to see the intent behind the game.

Let me begin by saying that Trials of the Blood Dragon is not a bad game, but it is a decidedly average game that is uneven in its overall presentation. We begin by following the exploits of Roxanne and Slayer – the children of Rex “Power” Colt and Dr. Darling from the first game. The timeline is several years later after Dr. Darling has come up missing and Rex is killed in action. Their children have picked up the mantle of American Heroes.

It is all ridiculous and over-the-top, much like the original Blood Dragon game. The obvious difference is that instead of slapping a neon soaked visual aesthetic with blaring rock music on top of a Far Cry game, the developers at Ubisoft applied it to the Trails franchise instead. The result is something that feels like a solid homage to the old 80’s action flicks I grew up with. Visually Trials of the Blood Dragon can be a lot of fun, but the attempt to blend a shooter with a bike racing game is not a smooth one. 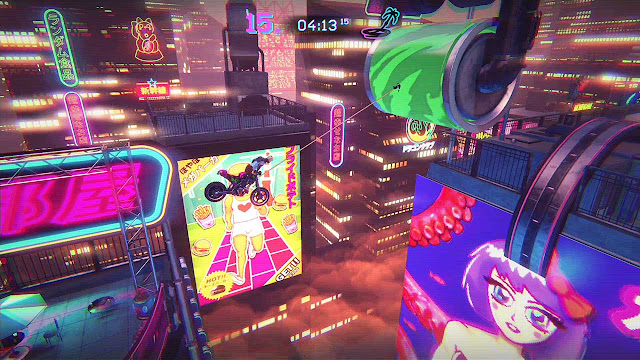 When the game starts, you roll out in familiar Trials style. This is a good thing as the Trials titles are generally awesome, and I found myself right at home accelerating into big jumps and rocking my bike back and forth to perform flips and stunts before sticking the landing by lining up the angle of my wheels with the slope of the ground beneath me. The in-game chatter and ridiculous 80’s cartoon cutscenes actually make for a campaign mode for Trials with a bit of story. It is silly, tongue-in-cheek stuff and that is just fine – it is actually what I would have expected as we play Stlayter during these parts.

The problem is when the game deviates from its successful motorbike roots. It slowly trickles in some weak gunplay bound to the right stick, giving it a strange twin stick shooter vibe as you steer your bike with the left stick. Generally speaking I found it more effective to simply run over enemies, rather than shoot them, and as such I found some of the sequences do test your ability to do a few things at once as you accelerate, jump and fire at enemies to be really irritating. But then, even if the developers had made the whole game focused on this experience, with its disappointing gun mechanic, I think Trials of the Blood Dragon would have been alright.

The real issue comes from when we take on the role of Roxanne. She is the ‘smart and stealthy one’ to Slayter’s ‘reckless and speed-loving’ character. Roxanne is fine as a character, but her scenes play out as an action platformer, and they are really unsatisfying. The jumping controls are floaty, and the shooting is again mapped to the right stick as you control the character with the left. Everything is imprecise, repetitive and essentially drains any momentum the game has going for it. There is the impression at first that these sequences would involve some exploration, but in reality it is all pretty linear stuff – just without the feeling of speed and explosive set pieces of the bike sections. A few other diversions are trickled in, such as the use of a grappling hook or taking over an RC car that essentially flips this way and that as it relies on the triggers to move left or right as it slinks into narrow spaces. There is also some unfortunate jet pack sections that simply do not work well either. Each stage culminates in reaching a goal that ends the mission, and while the Trials games are built around the idea of learning a track and going back to better your time and score, I had little desire to do so with any of the non-motorbike sections. This is a concern since the core game can be beaten in under two hours, so that replay value – or lack thereof – leaves this a too-brief experience.

In between missions, there is an interesting hub area at least. Here you see the siblings camped out in their room, studying a leaderboard screen or exercising – something along those lines. You can check out the old 80’s radio and change the station/pick new songs from the soundtrack to listen to. There are sticker packs you can unlock and open that allow you to fill up sections of a sticker book (I hadn’t even *thought* of a sticker book in probably twenty years, so kudos for that bit of nostalgia). You can look at the posters to select your next mission or replay earlier ones as well. The way all of these things and more are baked into this hub room was neat, but it is not enough to save the game from some of its more grating design choices.

There is a solid core game here in Trials of the Blood Dragon, the problem is when the team extends away from that core to do other things. Not all of the motorbike tracks are great, but that is true of the Trials games as well. The platforming segments are terrible, however, some of the more bombastic and colourful stages are an absolute joy to play, and the neon visuals and pounding soundtrack do an excellent job of selling the action.