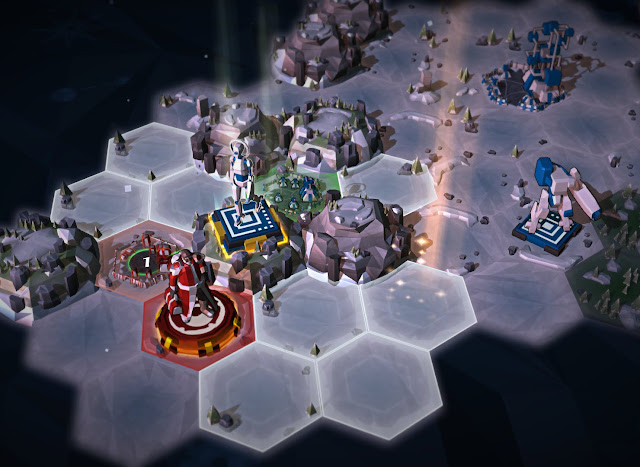 Last Days of Old Earth is hardly new territory from a narrative perspective. Even the core game is familiar almost to a fault. Where this title from Auroch Digital succeeds is in its ability to sprinkle in some unique gameplay elements that give off a digital board game aesthetic that is easily accessible.

The board game analogy is an easy one to make. It reminds me of several different tabletop strategy games with its reliance on cards and also dice. At first glance, the map has a decidedly Civilization vibe to it with its interlocking hexagonal design that looks better from a distance than when you zoom in close and details tend to become more blocky than they appeared. Also, because we are dealing with a snow covered landscape, things can feel very white and bland at times. It’s not the most visually stunning of art direction, but it is easy to tell units apart from one another and differentiate different types of terrain, so it is functional if not necessarily gorgeous.

Our story revolves around two different factions at war over resources. On one side of the struggle we have the robotic Automata and on the other we have the human Skywatchers. As the title alludes to, the sun is dying and the effects are being felt on the steadily colder environment. Time is running short and those survivors that are left must push towards the equator where there is warmth enough to sustain precious life. However, that journey is one where resources are needed – resources desired by the robotic life forms as well. 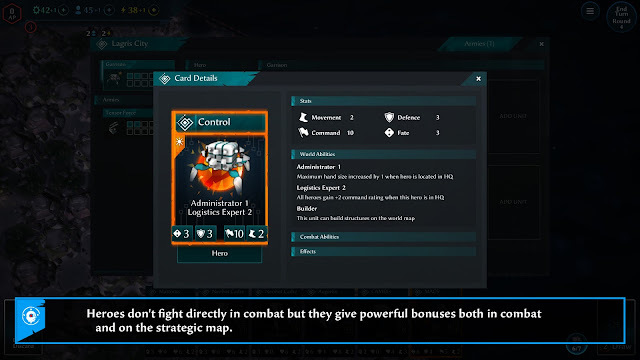 Being a turn-based strategy game, I was able to settle in nice and quickly with the fundamentals of the game. While I enjoy real-time strategy as well, the need to make decisions as time ticks away adds additional pressure that can make learning nuance more challenging early on, so at least, as I’m learning the ropes, games like Last Days or Old Earth do come across as more accessible. The simulation and construction aspects are actually rather simple as well, one of those dual edged scenarios that is both good and bad. Favourable because early on the learning curve is mitigated, but after you are familiar with the game’s overall mechanics, I came away wishing that there was a bit more depth to the systems.

Now the reason I compared this to a board game is because so many aspects of Last Days of Old Earth rely on dice rolls. If you are not a fan of major portions of the game being left to chance in this fashion, this title might not be for you. One of the more notable aspects of the dice is in deciding initiative. For a game that weighs order of operation so heavily, having the initiative can be very important later in a match between two otherwise evenly balanced sides. Another place where chance can come into play is in your deck of cards. These represent your units, which can be drawn at the start of a battle. There are pre-designed decks but also a deck editor, which I had a good deal of fun with. Some cards/units clearly work with one another in mind, and trying to come up with a deck built on that synergy is an entertaining endeavour in and of itself.

I like the way that the landscape also plays a factor in map visibility. It is a nice twist on the usual limited range of sight/fog of war mechanic in older strategy titles that makes terrain important. Now, despite these elements of a board game in play, Last Days of Old Earth could never succeed as a board game with the way it is currently designed. Here is where it can leverage the power of computing because there are numerous systems that get called upon in the background. One of these systems is the heroes that you can be called upon. While they do not directly engage with one another or military units, they grant bonuses to cities, armies or resources in a variety of different ways. 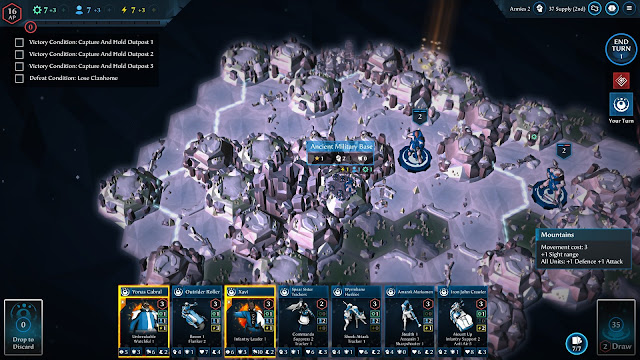 Despite the aforementioned aspects of the game that do rely on random number generation, solid strategy is still at the heart of what you do. Some of that work comes in the form of the aforementioned deck building, but even if you have the luckiest of rolls each and every time out, sending units out blindly without any real sort of intent will lead to defeat. You will want to explore the map, but cautiously. Spread yourself too thin, and you could encounter enemy forces you are not prepared to deal with. Turtle up and only venture out when you have a strong military presence, and there is a chance the opposition will have spread out more effectively and begun harvesting resources at a rate that makes it almost impossible for you to keep up. There is a risk and reward balancing act I how the maps unfold that I truly enjoyed.

There are a handful of different modes to try. The campaign mode feels like the place to start as you learn the basics and are slowly introduced to different kinds of units and terrain. The multiplayer will no doubt be what decides whether or not this title has legs that last beyond a few months. The skirmishes and their randomly generated maps are a nice touch as well, but it was not always easy to find an online match. However, the game only recently released, so perhaps more people will be playing as the game develops the dedicated community that it deserves.

The Last Days of Old Earth is one of those lighter weight strategy games that can scratch a quick itch to unwind after a long day (beer and all), but is not the sort of game you will sit down with for an entire afternoon. That can be a good or a bad thing depending on what you are looking for, but there are enough unique ideas injected into the familiar turn-based formula that helps Last Days of Old Earth stand out from a rather crowded field of niche strategy games.

Touhou: Scarlet Curiosity is one of the most interesting JRPGs from E3