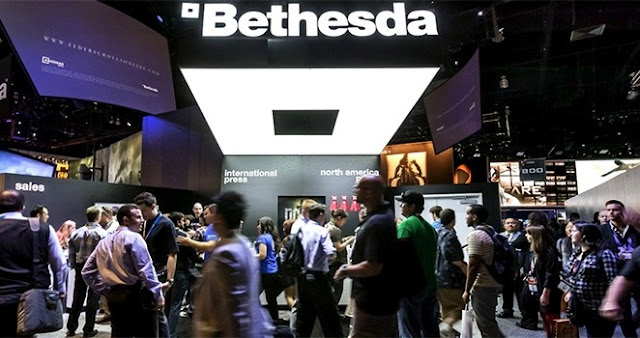 We have come to expect a lot from Bethesda, having delivered several of the best games of the last year (in this writer’s opinion) with Fallout 4, Fallout Shelter, Elder Scrolls Online and Doom. So the bar was set pretty high leading up to the company’s second annual Showcase event at E3, and there’s a lot to talk about.
Dishonored 2

Over the last couple of months, Bethesda has been teasing on social media that Dishonored 2 would be a big focus of the showcase. A few weeks ago we found out the title’s November 11 release and Bethesda dedicated the most time of any game at the showcase to expand on its story and gameplay details.
Tonight it was unveiled that Dishonored 2 is set 15 years after the original game with Emily Kaldwin now ruling the Empire of the Isles and watched over by her father Corvo Attano. An otherworldly usurper then takes the throne from Emily and you have to unravel a conspiracy and take it back.
When it was announced last year, we found out that players could choose between playing as Emily and Corvo. It has now been revealed that Emily comes with a whole new set of abilities, and Corvo maintains continuity with the first game by retaining his powers and has since upgraded them over the 15 years since the last game. Some of the new abilities include “Shadow Creep” seen in the trailer or the fragmented Timepiece which allows you to transition between past and present.
The new game is also built on the Arcane Studios’ “void engine” which is focused on ambient detail, such as sound, weathering and AI, to make stealth gameplay more realistic, atmospheric and exploration rich. To see what that looks like, watch the full reveal trailer for more:

Fallout
Fallout 4 has been Bethesda’s biggest title in the last year and it has been supported with a steady stream of DLC, including Automatron, Wasteland Workshop and most recently with Far Harbor – the company’s largest DLC release.
Fallout’s Game Director, Todd Howard, announced that there will be 3 additional DLC packs for the game – called Contraptions, Vault Tec, and Wasteland Vacation. Contraptions and Vault Tec both focus on building and crafting new items as well as adding a small amount of quest elements. In the post showcase interview, Howard added that the Wasteland Vacation DLC would be the final installment for the game which will take place in an over-run theme park location called NukaWorld.
The new DLC will begin rolling out from next week with Contraptions, followed by Vault Tec in July and Wasteland Vacation in August.
One year after its original release, Fallout Shelter, will also be getting it’s own major update. The release will allow players to send their dwellers on quests, Battle new enemies and finally play on PC when the update releases in July.
Arguably the biggest surprise of the showcase was that Fallout 4 will be coming to VR in 2017.
The VR version of Fallout 4 will likely include all the DLC mentioned above, and has been confirmed to launch with the HTC Vive. However, there was no mention yet of whether it will release for Oculus or Playstation VR.


DOOM
While there was a playable demo of Fallout 4 running in VR at the event, Bethesda said that it will announce more details will be released closer to release but did confirm that DOOM will be also be joining the Bethesda’s VR line up.
In addition to announcing DOOM’s VR support, Marty Stratton of Id Software introduced the first wave of DLC for DOOM which will include both free and premium updates. The free updates coming to all players including several new objective based multiplayer modes and new SnapMap construction modules and logic options as well as the ability to create single player experiences.
Id is also hearkening back to DOOM’s shareware roots by allowing players who haven’t bought DOOM to download the first level free for a limited time.
DOOM’s first premium/paid DLC pack is called “Unto the Evil” and will feature 3 new multiplayer maps (Offering, Cataclysm and Ritual), a new playable demon called “The Harvester”, as well as a new weapon, armor sets, equipment, taunts. and more. To see more about DOOM’s upcoming DLC, watch the reveal video.
Quake
At the opening of the showcase, id also surprised many of us by announcing a new installment in the Quake franchise with “Quake Champions”. The new Quake will stay true to Quake’s classic arena based combat and overpowered characters, while also running at 120 Hz. Bethesda was light on detail for the new title, but said that more would be announced at QuakeCon in August. Check out the reveal here.
Elder Scrolls
The world of the Tamriel looks to be expanding significantly, with a number of announcements around the Elder Scrolls. The first, and possibly most requested, is the Skyrim Special Edition, which releases on October 28 with remastered graphics and game elements for PC, Xbox One and PS4.
Elder Scrolls Online was also part of Bethesda’s 2015 lineup – releasing with a rocky start, but closing out 2015 as MMO of the year. The game is continuing to expand in 2016 with the Dark Brotherhood DLC as well as a new and rather intriguing feature coming soon called “One Tamriel”. The idea behind One Tamriel being to removes gameplay barriers by levelling characters to match content in the world, which means all content barriers (like trying to fight a boss that’s too strong for example) are eliminated and players are more free to work together.
Bethesda’s VP of PR & Marketing and resident strategy card game pro, Pete Hines, shared new details around the gameplay mechanics of Elder Scrolls Legends (trailer here), including a built out single player campaign, AI battle arena, multiplayer battle arenas, and support across phone, tablet, Mac and PC. The release date is still to be confirmed.
Prey
And finally, wrapping up a very new heavy event for Bethesda, we saw the first glimpse of Prey, the new psychological thriller from Arcane Studios…
And that about sums up Bethesda’s showing this year. What are your thoughts on announcements such as Prey?
Share this

Berserk Warriors both concerns and delights me