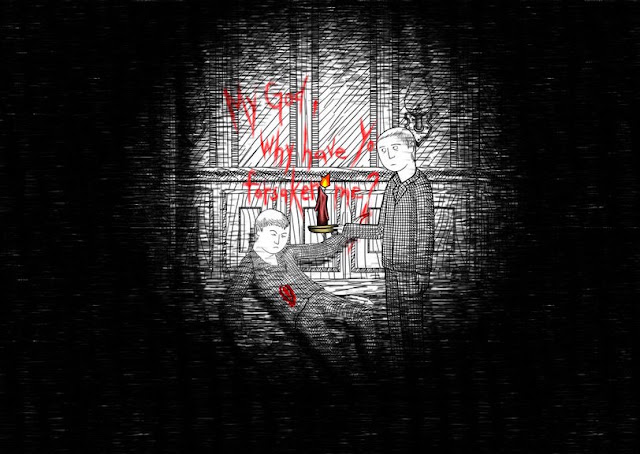 Life Goes On is a quirky and fun little platform puzzle game. Players have the goal of getting one little knight fellow from one side of a level to a chalice at the other end, with the main twist in this game being that the knight that reaches the end certainly won’t be the one that starts out.

Levels are filled with spike-filled pits longer than it’s possible to jump, for example, or pressure-based switches that will reset the moment the knight steps off them. Where other games might have you looking for boxes to make a safe jumping platform or keep the pressure on this switch, in Life Goes On the solution is simple – have a knight jump on the spikes or get himself sliced up so he lands on the pressure plate. The next knight will then be able to take advantage of his predecessor’s dead body. 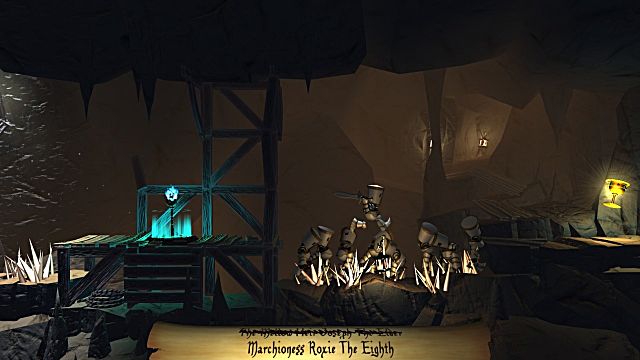 It sounds morbid, I know, but the developers have a wicked sense of humour, and the game is pulled off with some very silly Monty Python-like silliness. There’s not much by way of plot, but the animations, bright, cheerful aesthetic, and overall presentation of the game help to carry it.

And it becomes tough, too. Eventually you’ll need to be planning and executing multi-stage strategies well in advance, as moving traps and sliding doors need to be navigated through in real time once a plan has been set in motion. The only thing that holds this back is that the knights don’t control nearly well enough for precise action platforming to be anything but frustrating. The level design tends to be quite bland, too – unique mechanic aside you’re played what this kind of game is offering in some way before. But still, it’s good, clean, light-hearted fun.

The Sun And Moon (PlayStation 4)

Beneath the Game Boy-like green monochrome aesthetic is a fairly simply puzzle game in The Sun And Moon, which makes good use of momentum, light and shade to create something that manages to be challenging. Unfortunately it’s also not the most rewarding experience.

In each level, the goal is to get a little blob thing to collect a lot of little dots on the screen, and then to an end point, without getting the blob destroyed by running it into spikes or allowing it to fall into oblivion. Where the game becomes challenging is that these dots exist both in the open, and within the ‘ground’, and it’s possible to dive into that ground to try and grab those dots. 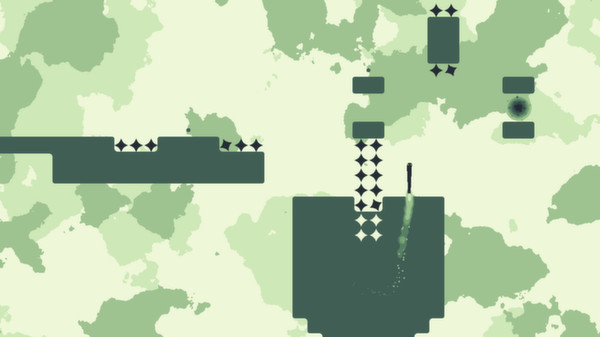 But like diving on to a trampoline, there’s only so deep that you can plunge into the earth before you’re sling shotted back out, and the greater the height of the dive, the bigger the effect. So eventually you’ll be making risky dives from great height to try and grab dots that are buried deep, and to create a massive slingshot effect that will help you reach far away platforms.

The game is made with competence and is certainly challenging where it needs to be, but is badly let down by its presentation, with one of the most painful soundtracks I’ve heard in years having me reach for the mute button. Meanwhile, the camera is so zoomed back that it becomes difficult to focus on the action, and the game has no character because everything animate in it is a couple of pixels in size, at most. Ultimately The Sun and Moon just isn’t unique enough that it justifies sitting through the poor presentation. Puzzle games are dime a dozen on every platform out there.

Finally! A jigsaw game that was developed with the understanding that the art of the jigsaw puzzle is the most compelling reason that people would want to do one. The art of Mandie Manzano has been used exclusively for this game, and the stained glass window aesthetic of Manzano, as well as the fairy tales and the like that she makes her subject matter, makes for some truly beautiful pictures to put back together within a truly beautiful app.

The developer, Octo Media, also realised that the jigsaw fans committed enough to the genre to play an app version of it are probably the sort that like puzzles with a large number of pieces so they can then pour over them over the course of a weekend, two, or dozen. This one allows for a variation of 12 pieces (so children can be kept occupied on a drive or train trip) through to 2000. It’s recommended that you play the 2000 piece puzzle on an iPad Pro in order to have clarity on what you’re looking at, but it’s nice the option is there for all players, and given the upper limit on puzzle pieces on every other jigsaw app that I’ve seen has been 1000, this is actually a bigger deal than it sounds. 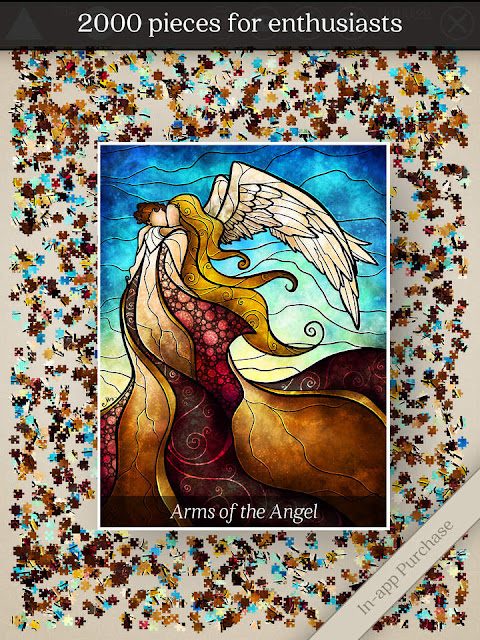 The only problem with this game is one that is common to all jigsaw games; one of the reasons that people do a jigsaw puzzle is to have a physical completed picture in a physical form at the end. They like the tactile feeling of picking up pieces and clicking them together. They like framing the end product. There’s no tactility to jigsaw apps like Mandie Manzano, and I don’t know if there’s a solution that makes them as rewarding to play. It is perhaps a fundamental flaw with digital editions of the classic pastime, but the experience really is not the same.

Still, Mandie Manzano Jigsaw Puzzle Art is the best jigsaw game I’ve come across. The art is beautiful, the design and interface of the game is elegant, and the music is nicely laid back and peaceful, which has certainly helped me zone out a couple of times since starting to play it. The base download is free and gives you a couple of puzzles to enjoy. If you get hooked, then you can pay for more “sets” of puzzles. I hope this is a success and the developer is able to bring its jigsaw platform to other artists.

It does impress me that a game this simple and primitive was able to have me sitting on the edge of my seat in tension. Neverending Nightmares is a game that you’ll start playing to have a laugh at, because you’ll assume that there’s simply no way it will be able to frighten you.

But you will be frightened. Oh yes, Neverending Nightmares’ descent into terror ends up being an intensely effective one. By the end of this game’s (reasonably short) run time I had a whole different level of respect for it, and it certainly wasn’t funny any longer.

GUYS! I THINK I might be playing a horror game. Mabye. #PS4share https://t.co/eYbPBElkPh pic.twitter.com/MY5VB2Xblt

The game is autobiographical, in that it charts a descent into a deep, suicidal depression. It goes without saying that this is a difficult topic to tackle, but it does a remarkable job of developing empathy in the player through its repetition. A bit like a twisted version of Groundhog Day, in Neverending Nightmares players keep waking up in the middle of the night, needing to explore their home in order to try and piece together what’s going on, and each night, as the main character loses his grip on sanity, the house around him becomes more twisted, more decrepit, more horrific. You’ll get to the point where you will dread uncovering a revelation, because it means you’ll be headed for an even worse ‘nightmare’ next.

As simple as the game looks, it makes really good use of lighting and contrast to build tension and even throw in the occasional jump scare. The nature of the game’s narrative development means it has a healthy respect for the surreal, and while it’s a downbeat narrative, it’s a rewarding and valuable one. It’s difficult for an artist in any field to explore something as personal as this in their games, and there is always something to learn from them when they do.

As a collection of minigames, Perfect Universe is an interesting idea that never quite manages to nail its brief. While the ideas within it are sound, it’s the execution of them is ultimately far too frustrating to be particularly enjoyable for the party environment the developer envisioned it for.

Three of the minigames within the software package act as single player training tools. There are three different gameplay mechanics at play in Perfect Universe; the first is fairly standard platforming, though the jumping is adjusted for low-gravity conditions. The second puts you in control of a weird alien thing that you move around by rotating the PS4’s control sticks in circular movements – one stick per leg. The third puts you in control of a spaceship, which suffers from a lot of inertia.

This is how you look spectacular while screwing up 😛 #PS4share https://t.co/yjeTpQ0cUS pic.twitter.com/uwJjXmERY7

After working through the single player game it’s time to take these mechanics to a range of local multiplayer games that range from golf, to a dodgeball-like game, spaceship racing and a 2D take on Rocket League, where you use the spaceships to knock soccer balls into one another’s goals.

It’s presented in an appealing manner, with the black-and-white sketch aesthetic extremely well done. Unfortunately, while the standard platforming action (and associated minigames) are accessible enough for multiplayer fun, the mechanics of the alien-based minigames, and the physics that drive the spaceship, make the other two thirds of the game frustrating beyond measure for anyone who hasn’t put a lot of time into learning how to play them. That in turn means the software as a whole is certainly out of reach of pick-up-and-play multiplayer fun. That would be fine if the game wasn’t built around the simple minigame experience, but there’s nothing in any of the minigames that makes them particularly rewarding to take the time to learn beyond their value as some quick multiplayer fun. In the end, Perfect Universe is a multiplayer party game that lets itself down by throwing mechanics at the player that are far too complex for their own good.

This week on the DDNet podcast: JRPGs, JRPGs and even more JRPGs!